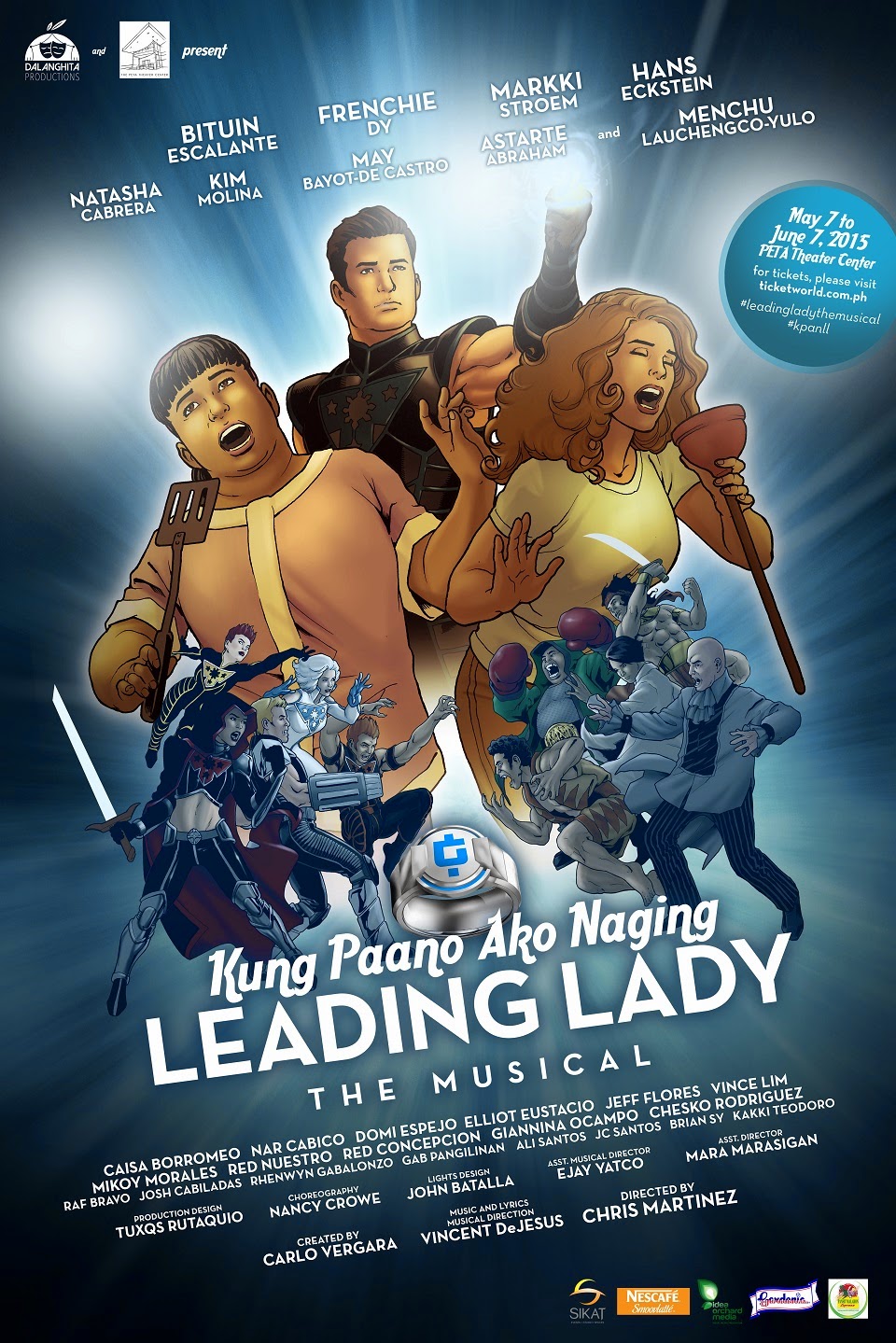 Mely Moran is a homely hardworking 35-year old woman who gets hired to be the maid of Fuerza Filipinas. This group of elite English-speaking superheroes is composed of their sword-wielding leader Madre de Dios, along with wind-controlling Windang Woman, the healer Nene Babushka, the soldier Bazookaman, and the cat-like acrobat Popoy Pusakal. Things get complicated when their newest recruit, the power-ringed telepathic Leading Man, appears to be falling in love with Mely.

Mely's younger, sexier and lazier sister Viva, on the other hand, gets recruited by a nefarious group of supervillains on the pretense of saving Mely, whom they claim was in danger. Calling themselves the Kayumanggilas, this group was led by the megalomaniac Senor Blanco and his minions. Powered by the Chemical Q, this rival group plots to destroy Fuerza Filipinas and become the premiere superbeings of the world. Clueless and foolish Viva fit right into their evil plans of world domination.

Mely and Viva had long been at odds with each other since childhood because of their disparate personalities. However, with this latest and biggest misunderstanding, their unstable and adversarial relationship as sisters results in a conflict that would threaten the lives of all the superheroes, as well as the very safety of the whole world. 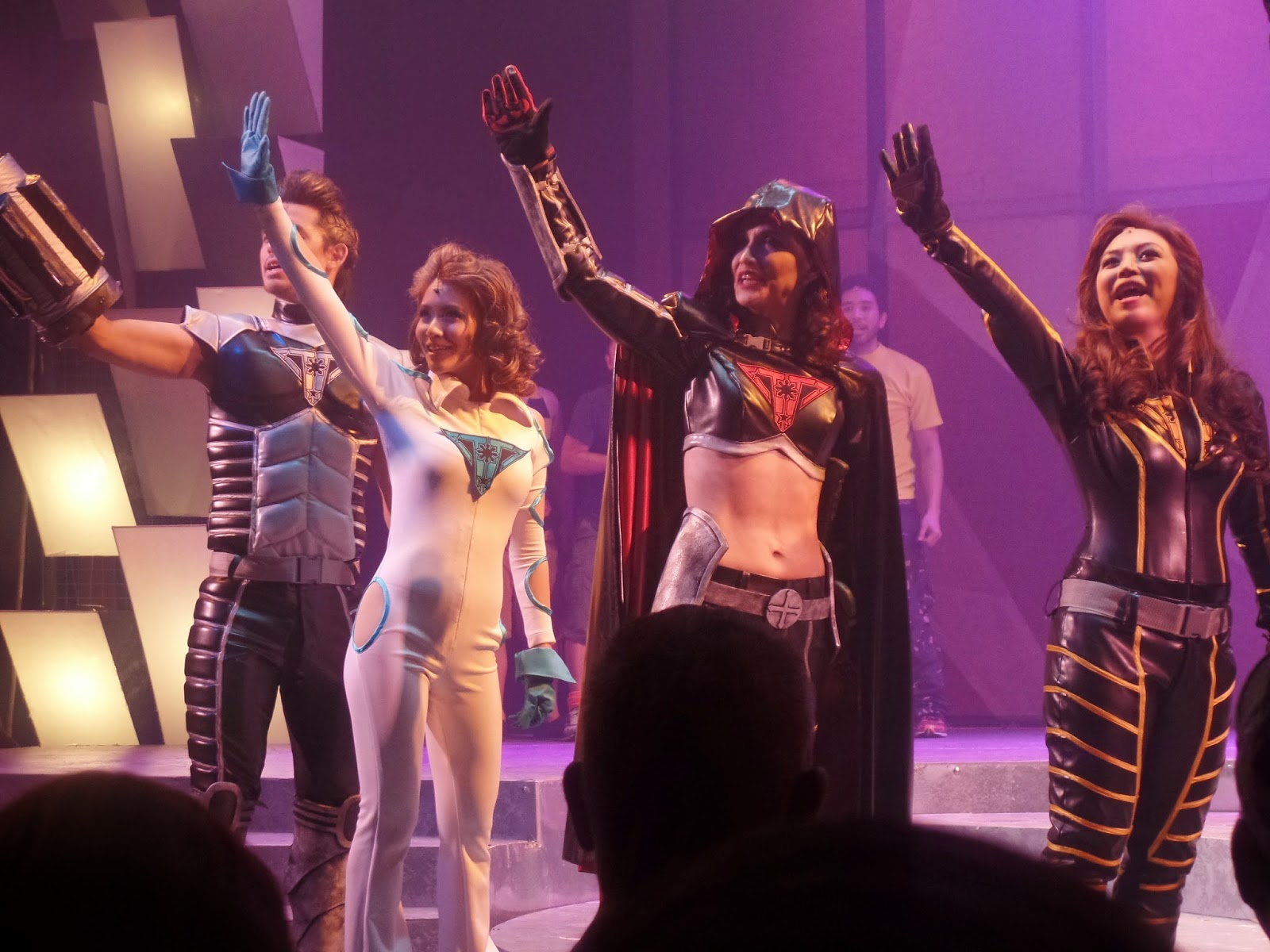 The plot of this musical is derived from Carlo Vergara's one-act play of the same title, which was an audience favorite during the Virgin Labfest 9 held at the CCP two years ago. Vergara has expanded that original one-act play into a big musical production with two complex acts, each act lasting almost an hour and a half each.

The first act took its time to establish the multiple characters and their relationships. Momentum would occasionally dip at certain points and it felt as if this act could need some editing and streamlining. However, when the second act came, all of that is forgotten as each scene was a showstopping highlight. The audience could be jarred as the seemingly light-hearted first act takes a turn to the very dark, even showing a very grim massacre happening somewhere in there.

However, whatever shortcomings the very complex script may have with all the characters it had to deal with, it is the talent and charisma of the actors that become the crowning conceit of the whole show. Every actor just seemed to embrace their character perfectly, possessing voices that were able to soar with the punishing arrangements. It was one of those rare productions that brought together actors more known for their English plays and those more known for Filipino plays. I found this very exciting. 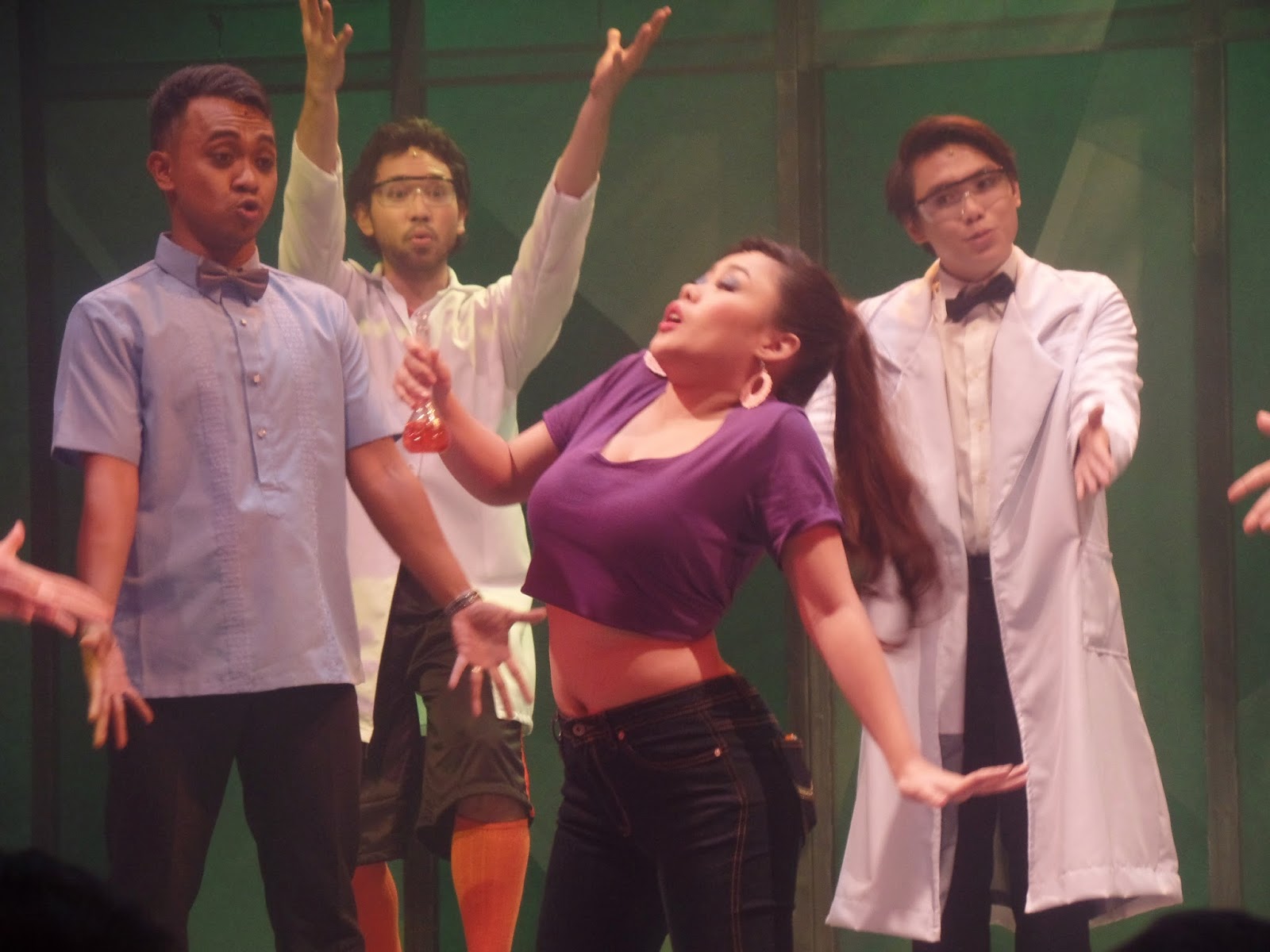 Bituin Escalante fit her role as Mely so well, from the unsophisticated looks to humble demeanor. Her singing voice was impeccable as always, on point in pitch and emotion. Her acting was painfully poignant. Escalante's struggle with her Segway is a quite a sight to see. Her alternate in this role is another big-voiced belter, Frenchie Dy. Since these two singers would appear to have very different personalities (Escalante being more serious, and Dy more wacky), it would really be interesting to see Ms. Dy's attack on this role as well.

Kim Molina, whom I did not catch in "Rak of Aegis," surprised me with her powerful voice as Viva. It is her character who went through the most complicated development in the play, sometimes even feeling more like the central character than Mely. Molina's alternate in this role is Natasha Cabrera. Escalante and Molina had a powerhouse trio number with May Bayot (who played their mother), which was one of the best songs in the show.

It seemed effortless for Markki Stroem to draw attention to himself when he is onstage as Leading Man because of his charming smile and strong stage presence. He was also given a lot of scenes with romantic thrill, which he pulled off quite well. Compared to previous plays I have seen him in like "Carrie" and "Next to Normal", his work here is a very marked improvement. His alternate in this role is Hans Eckstein, who was the original Leading Man in the Virgin Labfest one-act run. 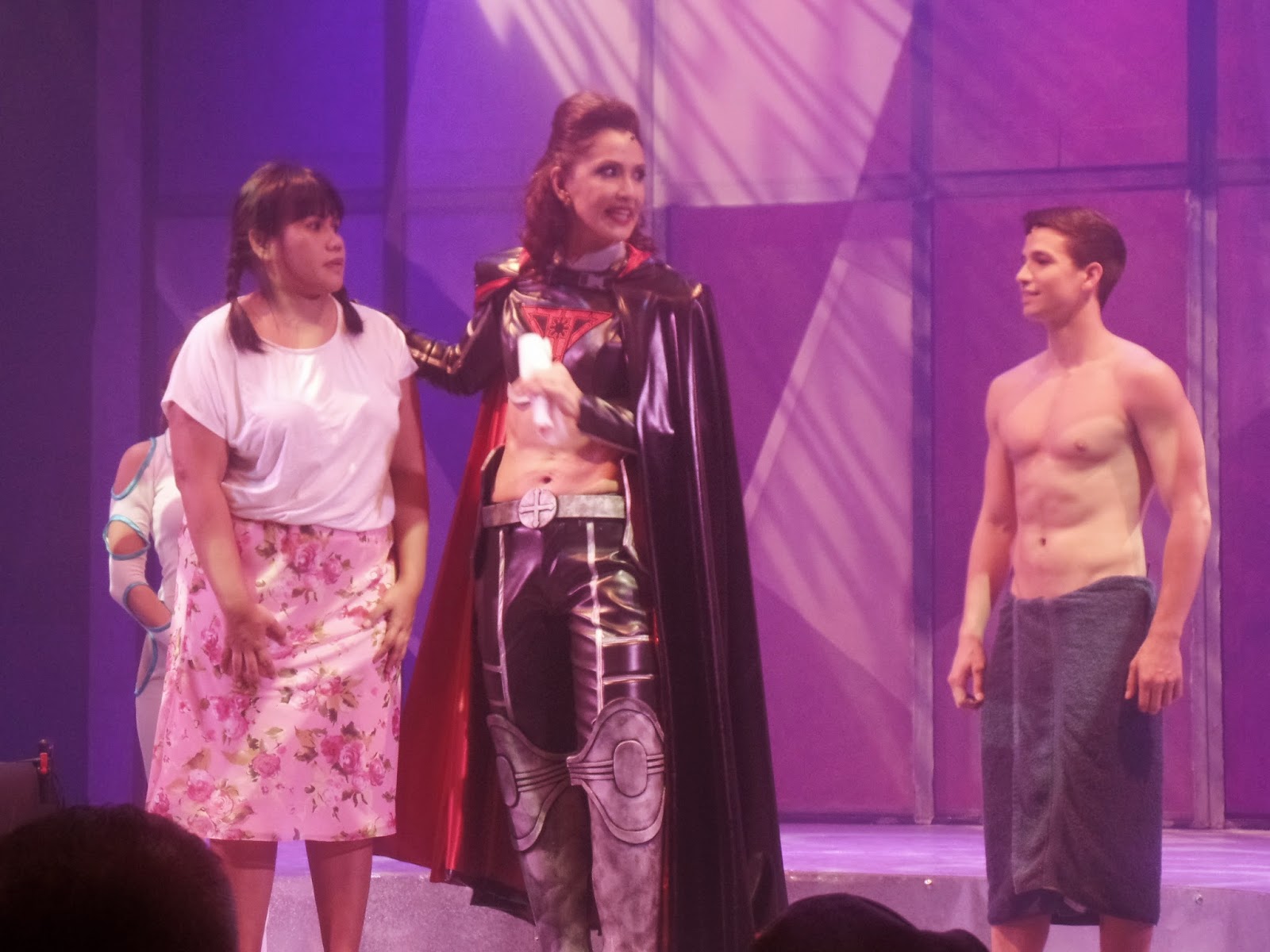 It was my first time to see Menchu Lauchengco-Yulo on the PETA stage, and it would be as the kickass Madre de Dios. I thought we would actually hear her speaking in Tagalog, but as it turned out, her role was still totally in English. She gets to display her toned body in the fight scenes, as well as her powerful voice in her featured song in the second act. It is surprising to learn that this is Ms. Menchu's first appearance in an original Filipino musical in her long and storied career as "First Lady of the Philippine Stage". (Her alternate in this role is Astarte Abraham.)

Among the Fuerzas, Gianina Ocampo stood out in her friend-zoned role as Nena because she got to deliver one beautifully sad and self-denying ballad. Jeff Flores, who was so good in Rep's recent show "4000 Miles", registered strongly as Bazookaman. Caisa Borromeo and Chesko Rodriguez complete the roster as Windang and Popoy respectively. Kakki Teodoro managed to steal scenes as the Fuerza's Robot.

Nar Cabico had the most memorably funniest scenes and lines of the whole show as the evil Senor Blangko, who prided himself with his hifalutin yet mangled English. He delivered hilarious lines like "Like a flower, you will smell" with confident gusto and aplomb. (His alternate in this role is Domi Espejo.) 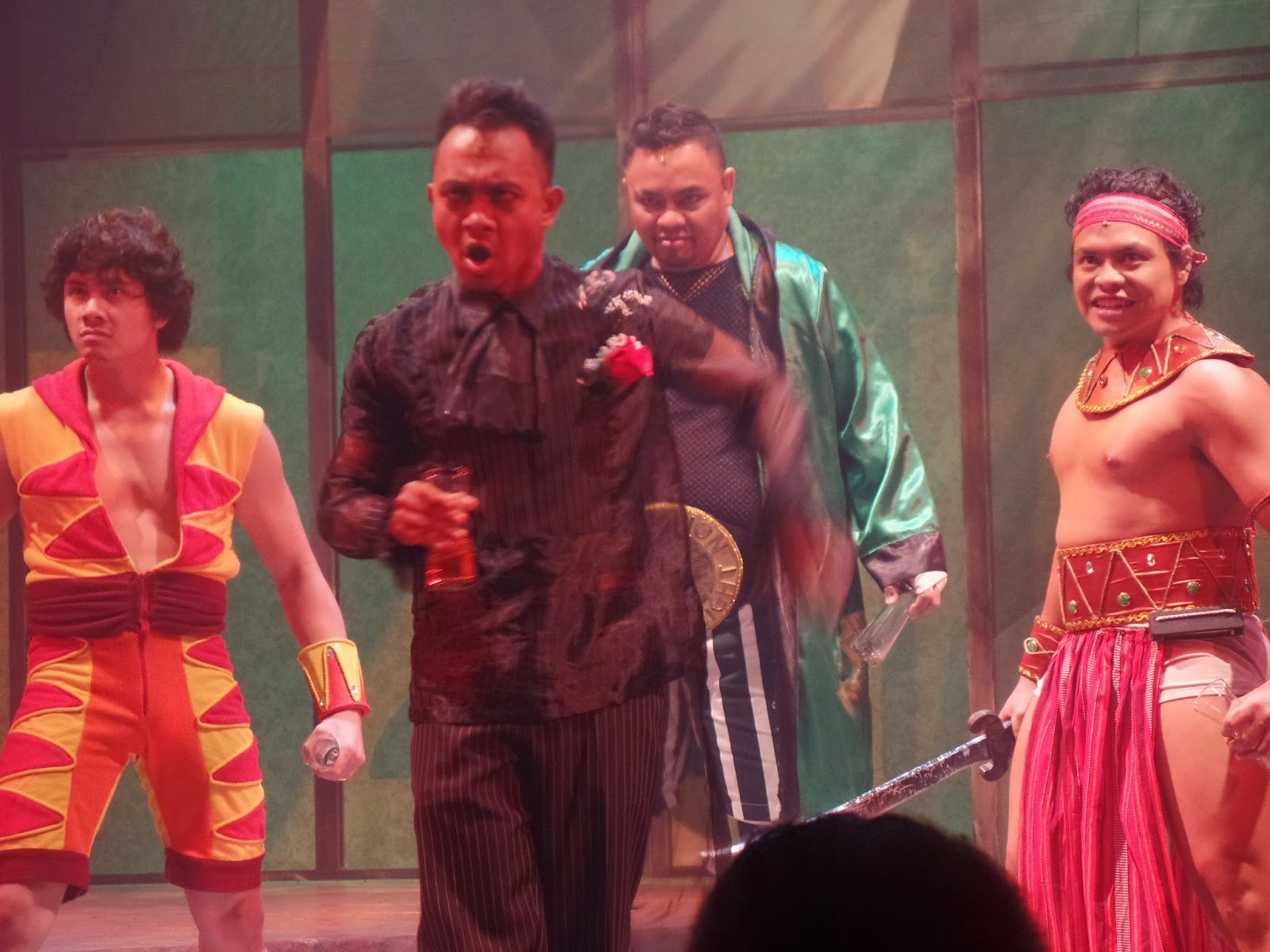 Red Concepcion (as the g-string clad Itak-Atak) and Red Nuestro (as the heavyweight boxer Marakas Marko) did their best with their funny villain roles. JC Santos makes a charming canine villain Jeryc Sans Rival. Vince Lim surprised us with his unexpectedly amazing vocals in his scientist character Henyotik's one featured song number. (Mikoy Morales would alternate in this role). Their Kayumanggilas group song which opened the second act was one of the show's most applauded song and dance numbers.

The PETA stage was transformed into a most futuristic-looking set. It came complete with a rotating circular stage in the foreground. The first time we see it rotate was during that scene when Mely initially meets a towel-clad Leading Man, drawing big cheers from the audience. The costumes by Tuqxz Rutaquio ranged from the X-Men inspired Fuerza leather garb to the most "jologs" Kayumanggilas attire. The songs and musical score were signature Vincent de Jesus. The exciting lighting effects of John Batalla were so critical during the battle scenes.

Congratulations to Director Chris Martinez and the young triumvirate behind Dalanghita Productions (Ansis Sy, Claudia Fernandez and Pertee Briñas) for this solidly entertaining show! It managed to weave an intimate family drama between sisters with a superhero battle-royale of a much bigger scope, while delivering a positive message of recognizing our inner gifts and rising up to challenges. While doing that, it bridged both sides of the Philippine theater scene into one grand production. 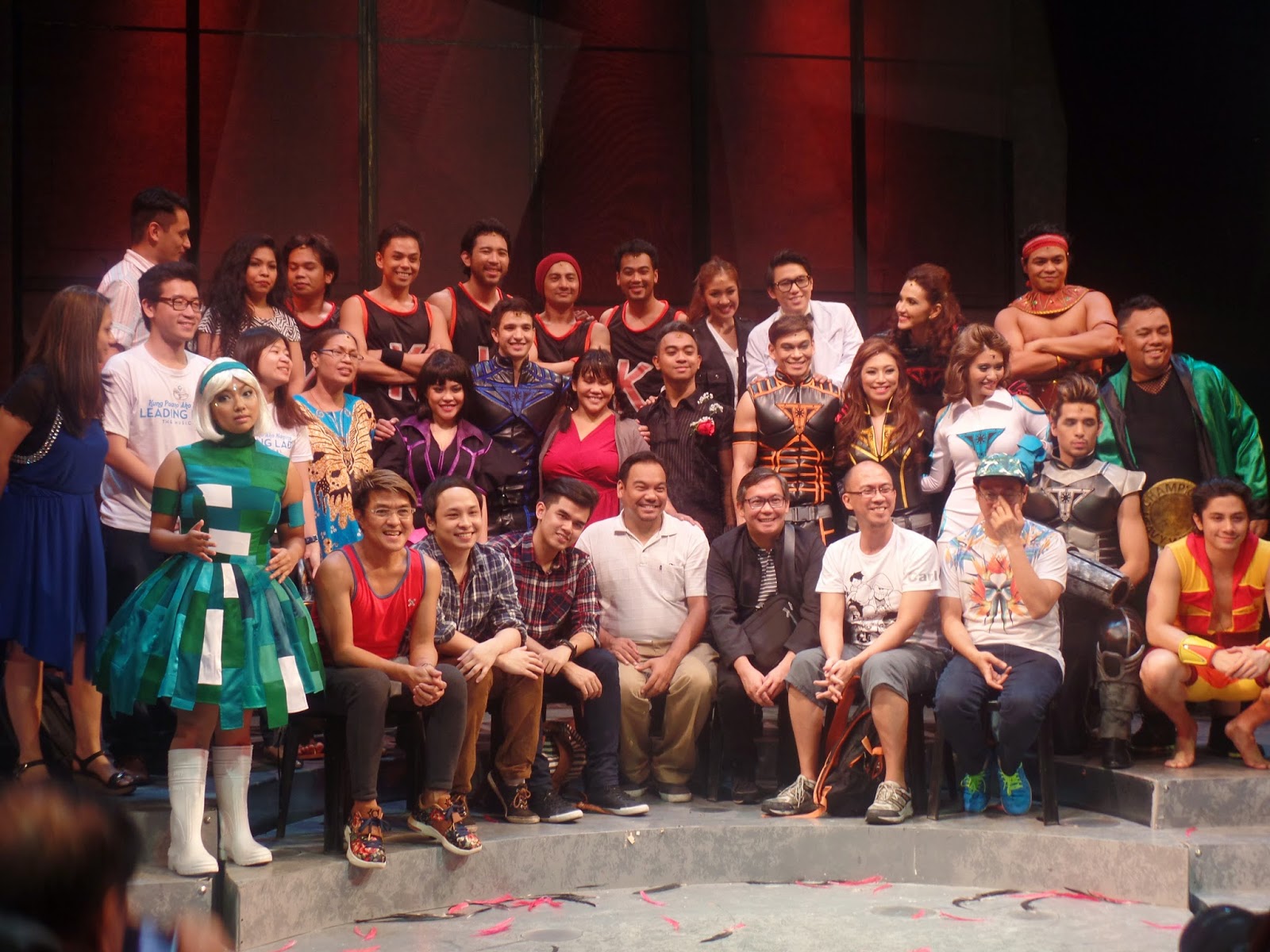 "Kung Paano Ako Naging Leading Lady the Musical" opens today May 7 and will run until June 7 from Friday to Sunday at 8 pm, with 3 pm matinees on Saturdays and Sundays. Venue is at the PETA Theater Center in New Manila, Quezon City. For ticket inquiries, call Ticketworld at 891-9999. Tickets are at P1500, P1200 and P800. They are offering big discounts during the opening weekend.