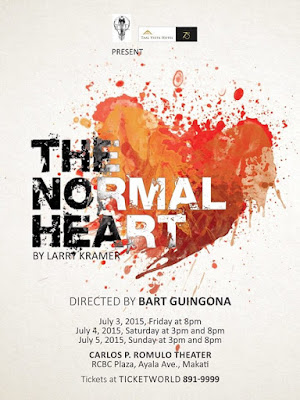 Actor's Actors is a theater company that started more than 20 years ago in 1992 by theater stalwarts Bart Guingona, Jaime del Mundo, Michael Williams, Menchu Lauchengco Yulo and four other partners. Since 1998, they started producing a series of provocative straight plays which they dubbed The Necessary Theater.

I have heard about their productions, but I realize I have never watched a single one of their shows at all, not even their last two Gawad-Buhay award-winning plays: "John Logan's "Red" and David Ives' "Venus in Fur". Luckily, this year, I was finally able to catch one, and it had to be one of the more devastating plays about HIV, "The Normal Heart."

HIV and AIDS are diseases that are so rampant in the Philippines now, especially among the young, yet we only hear about it every once in a while. Truth is, latest 2015 statistics already show that a whopping 22 new cases are diagnosed EVERY DAY! Despite being written and first staged in the 1985 when AIDS was a big health scare which had yet to be understood, "The Normal Heart" remains very relevant up to these days in our country where a stifling social stigma is still continually hangs above HIV/AIDS patients.

The setting is 1981 in New York City. Writer Ned Weeks is very distressed that many of his fellow gay friends have been dying of a mysterious disease affecting the immune system. Initial evidence points to promiscuous sexual practices of homosexuals as the possible mode of infection. Harassed wheelchair-bound physician Dr. Emma Brookner advised him strongly that the only way to stop the spread of infection is to stop risky sexual activity.

Ned begins his aggressive and active educational campaign. When a suspicious lesion was seen on the sole of the foot of Ned's new boyfriend Felix, Ned had to work overtime to draw more public attention to their cause. However, the gay community of that time, including Ned's friends, was very resistant to this idea of changing their habits. The government was not inclined to help in their marginalized cause. The death toll continued to rise.

Author Larry Kramer wrote this play out of his own personal experience during the HIV crisis and his heart is bared in the play's fierce words -- the turmoil, the humor, the compassion and the insights. It started as an Off-Broadway play in 1985, with Brad Davis, and later Joel Grey, playing Ned Weeks. It debuted in London's Royal Court Theater in 1986 with Martin Sheen as Ned. It only made its Broadway debut recently in 2011, with Joe Mantello as Ned, Lee Pace as Bruce, and Jim Parsons as Tommy. This play won the Tony for Best Revival of a Play, while Ellen Barkin (as Dr. Emma) and John Benjamin Hickey (as Felix) received Tonys for Best Featured Actors in a Play that year.

In last night's staging held at the Carlos P. Romulo Auditorium of the RCBC Plaza in Makati, the caliber of the acting in this ensemble piece of theater was astounding. Every actor in the eight-member cast had their big difficult dramatic moment which they attacked with such deep-seated emotional ferocity.

The heartbreaking drama is guaranteed to bring sympathetic audiences to tears of recognition and identification. It is also powerful enough to move even the most unsympathetic audiences to a deeper understanding of the losing plight faced by an HIV/AIDS patient from the 1980s to the present. Its devastating message is evidenced by the warzone-like mess that the stage looked like by the end of the play. This play and its potent cast will definitely be rewarded come awards season. 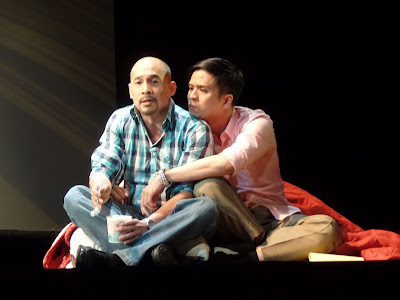 
With Bart Guingona's raw and passionate performance, you can feel the boiling frustration within Ned Weeks. Ned always antagonized everyone around him with his abrasive attitude brought about by the the cavalierness of the people around him, and Guingona succeeds to convey just that. He was practically onstage the whole play going through the whole gamut of emotions with intricately-worded kilometric lines, and he nails them. Guingona also directed this play. Not only was he was able to get the best performances from his actors, the energy of the play never felt bogged down by the heavy drama. 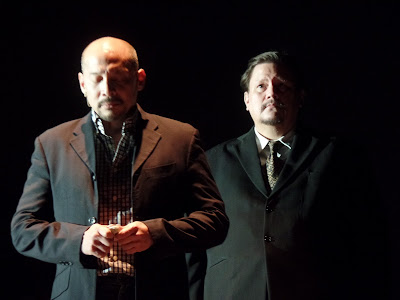 
You can witness the gradual withering away of Felix Turner from a vibrant bon vivant into a pale white ghost, with Topper Fabregas' sensitively delicate performance. Richard Cunanan again shines with a flawless laidback effortless performance as Ned's lawyer brother, Ben Weeks. Since he is more known for his TV and movies, I did not expect TJ Trinidad's proficiency in stage acting as Bruce Niles. We can clearly feel the inner conflicts of a closeted homosexual in his subtle performance. 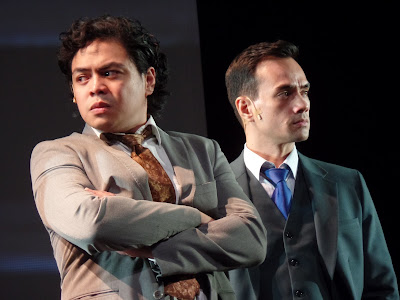 
This is my first time to see PETA staple Nor Domingo in an English-language play, and he blew us away with the powerful monologue of his character NYC health officer Mickey Marcus, filled with angst and pain. In multiple smaller roles, Red Concepcion and Jef Flores once again display their acting versatility. Concepcion shone most as compassionate Tommy Boatwright. Flores' best moment was as the infuriating NYC Mayor representative Hiram Keebler. It is amazing to note that these three actors all have another theater projects ongoing this same week (Domingo in "Rak of Aegis", Concepcion and Flores in "Leading Lady"). 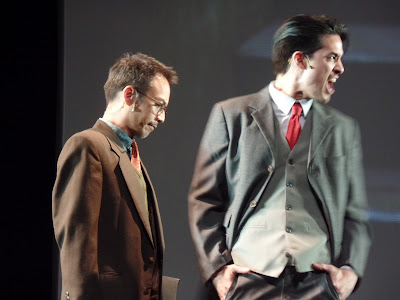 Nor Domingo and Jef Flores


My favorite performance of the night was that of Roselyn Perez as polio-stricken, wheelchair-bound Dr. Emma Brookman. She is a veteran of the stage, and even one of the founding members of Actor's Actor, but I will have to confess that this is the first time I have seen her in a major role. While she was excellent in all her scenes, Perez' Dr. Emma in Act 2 Scene 12 was her memorable highlight. It was such a tour de force performance, unforgettable in its sheer bravado, seething with pulsating anger. My own personal background makes me identify with her mission the most, the desire to bring only the best possible quality of care to patients. 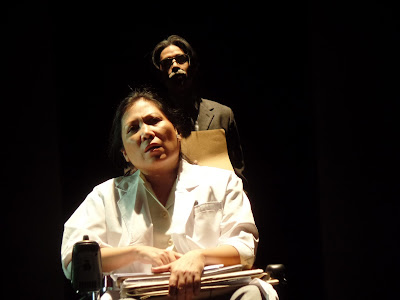 
The stark and simple stage design was perfectly executed by Coco Anne and Baby Imperial. The lighting design of Meliton Roxas was likewise able to highlight the dramatic scenes so well with his expert play of light and darkness. There was a prop malfunction regarding a telephone at a crucial scene that distracted the audience, but I am sure they will make sure it won't happen again.

Despite the period nature of this play, the topic is hardly a historical footnote. The issues tackled in the play are still very true in this day and time, especially in our country. Sadly, this powerful and thought-provoking play will only run for five shows in three days this weekend July 3, 4 and 5, 2015. Kudos to Actor's Actor for its initiative and civic responsibility in staging this important play for local audiences. I think it is a very educational and informative piece that deserves to be toured throughout our country to bring to the forefront the HIV/AIDS situation our country is in right now.

A Q&A session after the Press Preview featured a lady guest from Pinoy Plus. This is a locally-based support group for PLHIV (people living with HIV). This epilogue brought the play to its proper context in the present day in the words of an actual person who has been living with HIV for the past 24 years. She is physically well and socially confident because of the strong support she receives from her family and support group. Unfortunately, this is not true for all PLHIV, especially those belonging to marginalized groups. The main thrust of their organization is to reach out to all PLHIV in the country to provide them psychosocial support and to be their advocate in community and governmental matters. 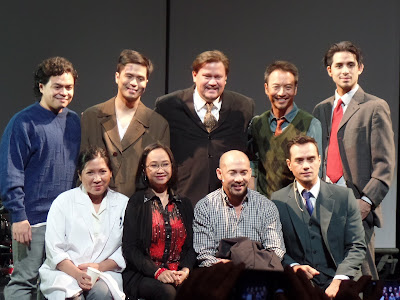