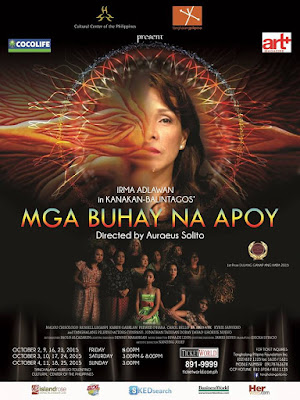 "Mga Buhay na Apoy" just won the First Prize for a Full Length Play in the 2015 Carlos Palanca Awards for Literature for playwright/director Auraeus Solito. Since 2013, Mr. Solito went by the spirit-tribal name of Kanakan-Balintagos (Hunter of Truth). "Buhay" is a play he wrote back in 1994, but the manuscript got misplaced, only to resurface 20 years later.

His most famous movie would be his first feature film "The Blossoming of Maximo Oliveros", a winner of several international awards. His latest film was "Esprit de Corps" which won him the Best Director Award in last year's Cinema One Originals Film Festival. "Esprit" is an adaptation of the first play he ever wrote at the age of 17. After watching "Buhay," I think it may just follow in the footsteps of "Esprit" and get a film version of its own. 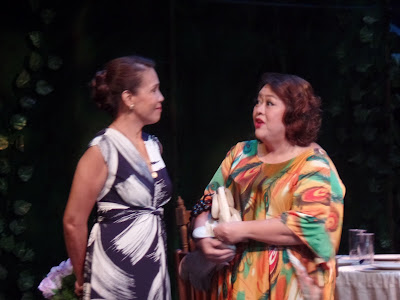 Leda Santos was very excited that her estranged daughter Aurora Alba was moving back home. To welcome her back, Leda hosted a family get-together in their spacious garden at their mansion in Sampaloc. Invited are Leda's sisters, Lili and Selmah, and their respective families. Leda's artist son Aran was also happy that his sister is coming home, but he was constantly at odds with his mother, even during the party itself. The deeper the night got and the conversations got more intense, long-repressed family secrets all come spilling out, threatening to rip the broken family further apart. 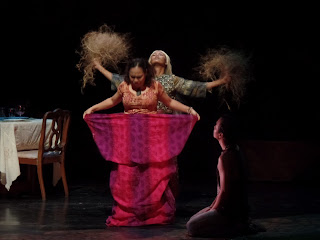 It is clearly seen from the script that Kanakan-Balintagos loves his home province of Palawan. This play not only boasts of Palawan's rich flora and fauna, we also get a profound glimpse into its rich folkloric and cultural legacy. Leda and her sisters were originally from a remote island in Palawan. Lili and apparently even Leda herself were shaman priestesses back then, probably inspired by the author's own uncle who was a shaman. The show opens with haunting Palawanon chants sung with the powerful voice of Carol Bello. We will also see a Palawan diwata lurking around their garden, played by Lhorvie Nuevo.

Irma Adlawan is a respected award-winning actress of film and television. However, this is the first time I was going to see her act live on stage in the lead role of Leda, which is one big reason why I really wanted to catch this play. For the most part of the play, we only hear people talk about Leda, a mother who cannot seem to get close with her children. But It is only in the second half of the climactic and critical Act 3 that we see the full dramatic power that Ms. Adlawan is known for. 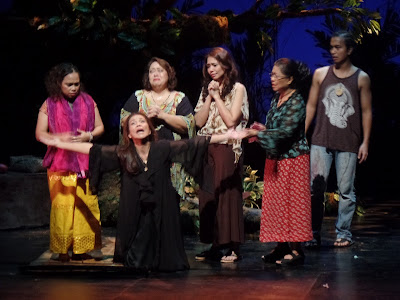 The quiet and mysterious elder sister Lili was played by Carol Bello. Her chanting is truly unforgettable. Her much younger husband Benj was played by TP stalwart Jonathan Tadioan, who was as natural as he always was onstage.

The hearty and jolly younger sister Selmah was played by Malou Crisologo, who is a familiar face on TV. Crisologo was a shining bright light on the constant dark scenario playing onstage. 13-year old Kyrie Samodio played Selmah's daughter Topaz, curious and wise for her years. JV Ibesate plays her boyfriend Ringgo in an oddly childish portrayal. 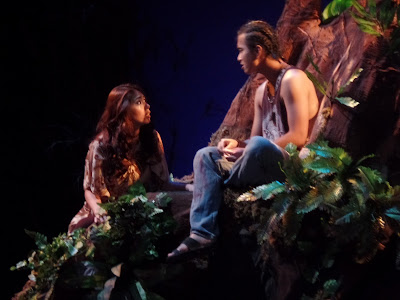 Karen Gaerlan effectively played her troubled character Aurora Alba, who turned out to be the voice of reason in the play. On the other hand, Russell Legaspi seemed to be having a harder time connecting to his troubled character of Aran. As the only male major character, Legaspi's acting was rather tentative amidst the powerful portrayal of the ladies. This felt as uncomfortable as the braids on his head. It was not easy to connect with his character.

The stage design by noted landscape architect Paulo Alcazaren, who had to build a garden with a huge tree as the centerpiece right there on the stage of the Little Theater. The emotive lighting design was by the multi-talented Dennis Marasigan, whom I only knew before as actor, director and writer. 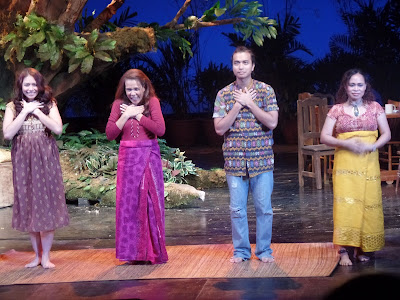 The entire first two acts were but an extended introduction to the main meat of the play in the explosive Act 3. In fact, Act 3 alone is already worth the price of admission for the impressive flow of the dialogue and the array of fine acting on display. Kanakan-Balintagos has written and told an intricate story about how a life full of pain, heartache and suffering in one person affected the life of every person in her immediate family, mixed in with Palawan folklore. This is an uncommonly powerful piece of Filipino theater with distinct ethnic pride. Kudos!