Recap and Videos of SAM SMITH Live in Manila 2015: Sincere, Soulful and Sentimental 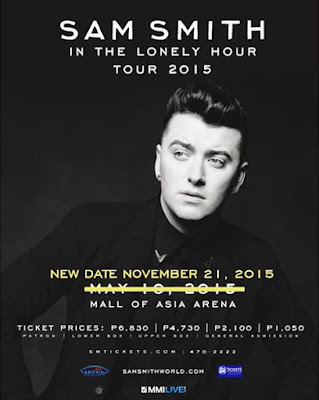 Late last year, I bought tickets on the afternoon of the first day of ticket sales, and already failed to get the section I preferred. Anyhow, I got good enough seats for my purposes. If you see the poster, the tickets prices were not too high )nothing Madonna 58K-crazy!), so this concert set for May 10, 2015 quickly sold out.

By December 7, 2014 though, there was a surprising announcement of a postponement of this much awaited concert. Sam Smith posted a message online to explain that he had "serious issues" with his vocal cords that needed to be addressed by an American specialist. He adds that this is "horrible" for him and he is truly very sorry. Tickets for the original date will be honored for the new date yet to be announced. By July 15, 2015, the new date was confirmed to be November 21, 2015.

We reached the Arena about 7:30 pm. It was different this time. Instead of everyone entering the venue via the entrance on Coral Way like all the previous concerts I had been to before, some of us were diverted to walk all the way around the building to enter via the Marina Way. It was my first time to see that part of the MOA Arena.

When we reached our seats, there was a lone DJ on stage playing electronica mixes. I recognized "Need You Tonight" by INXS as one of the songs in the mix. It was not yet 8 pm yet this front act was already playing. His set ended by about 8:15 pm. He did not speak anytime during his performance. I did not even hear him introduce himself. 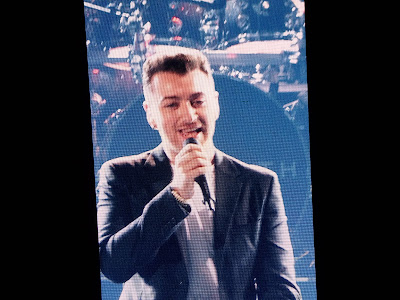 Sam Smith on the Screen

By about 9 pm, the house lights dimmed and the show was about to begin. There were flashes of light on the stage whenever Sam Smith's distinct tenor voice started to sing. The first three songs he sang were not too familiar to me but they were very catchy just the same: "Life Support," "Together" and "Leave Your Lover."

In his spiel, he mentioned he about his cancellation, which is why this night is a "specially special night" so intends to sing harder than he does. Since Smith only has one album so far, it was not surprising that some fans knew ALL his songs by heart, singing along with every lyric. Then as the light turned red with designs on the floor, we hear the strains of "I'm Not the Only One," a song that went to #3 in the UK and #5 in the US. The whole audience was singing along with him the whole time during this well-loved song.

Sam Smith candidly told us a lot of personal stories behind the songs in his debut album "In the Lonely Hour", an album that signified himself being as honest as he could in the language of music. He called this album "a diary of mine." The next song is the first "really honest honest song" he wrote, "I've Told You Now." The next song I have not heard before, but it was really rousing and uplifting, "Nirvana." His signature vocals, head tones, and runs were all so especially on point in these poignant songs.

The next two songs were familiar upbeat songs that Smith had. He does not really dance too much in these songs, just like Rick Astley did back then in his upbeat songs. Everybody was singing along to catchy chorus of "Like I Can" (VIDEO) and dancing along to the Sam's dance instructions in the super-groovy "Restart." His next number was a medley of R&B covers including "Tears Dry on Their Own" by Amy Winehouse, "Ain't No Mountain HIgh Enough" by Diana Ross and "Le Freak" by Chic, which featured the strong vocals of his three back-up singers. The lighting effects of the stage were spectacular during this medley.


He then slowed down the pace again, singing two songs that he felt are the heart and soul of his debut album. He talked about falling in love with someone who did not love him back, now that he has moved on from this heartbreak, the resulting songs are now not his songs anymore, but his audience's songs already. The first of these songs is the pensive "Not in That Way," which he mixed with Elvis Presley's "Can't Help Falling in Love" to the audience's delight. The second is the very popular song "Lay Me Down," (VIDEO) his first hit as a solo artist, hitting #15 in the UK and #8 in the US.

Smith upped the tempo again with his infectious next song "La La La," a #1 song in the UK, #19 in the US, credited as Naughty Boy featuring Sam Smith. He ended his regular set with the only song in his album that was not about love, but about another artist he did not like who sang not for passion but for money. The song is "Money on My Mind," another #1 song in the UK. He mixed in a familiar line from Cece Peniston's anthem "Finally" in the final chorus of that song.


The audience clamored for more as the house lights were dimmed. After a while, the keyboardist started to play a slow melody. Sam Smith came out and said that he will sing his 2012 song with Disclosure called "Latch" (VIDEO), his first US Top 10 hit that peaked at #8. He asked everyone to shine their phone lights as he sang a slowed-down version of this hit song. The next song was a letter his "first boyfriend" which drew cheers from his fans, "Make It to Me." He saved his biggest hit for last "Stay with Me" (#1 UK, #2 US). He called the night "amazing" an opinion which I am sure his audience all shared. That last song gained a new meaning as the fans all wanted him to stay on with them. 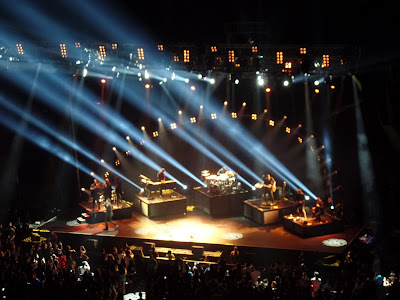 The Stage Lights were Spectacular!

Concert was finished in little over an hour only. I was a bit disappointed that he did not sing "Writing's on the Wall" from the latest James Bond film "Spectre." Nevertheless, with Sam Smith's candor, friendliness and his soaring vocals, this is surely one of the best,most sincere concerts I have attended ever.