Review of Repertory Phils THE SECRET GARDEN: Melancholic but Moving 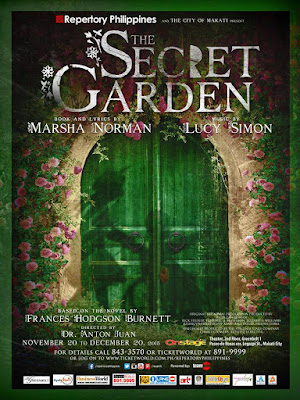 "The Secret Garden" is a 1991 musical with Tony-award winning book and lyrics by Marsha Norman and music by Lucy Simon, based on the 1911 novel of the same title by Frances Hodgson Burnett. I know two songs from this show from previous Broadway concerts, but I had never seen the actual musical performed yet. I was excited when I learned it was being staged by Repertory Philippines, and directed by no less than the renowned Anton Juan. Though I had a basic idea what the story of the novel was, I had no inkling on how it would be told as a musical.

A spirited 10-year old English girl living in India was left orphaned by a cholera epidemic, so she had to be brought back to England to live with Sir Archibald Craven, the widower of her mother's sister Lily who died in childbirth. While Mary was haunted by ghosts of her parents and other departed people in their household in India, her uncle is still grief-stricken with the death of his wife several years back. While she spends her days exploring the house, Mary finds her sickly cousin Colin who had been confined to quarters since birth by his uncle Dr. Neville Craven, as well as her aunt Lily's forgotten garden, closed down since her death. While her Uncle Archie was away, Mary sought to help both Colin and the garden recover their vitality.

For what was supposed to be a production aimed for children, the book and music of this show can be too morose and depressing and even creepy for comfort. Those pale-hued antique-looking costumes and the seemingly sheet-covered sets add to the lonely and dreary atmosphere. Throughout the show, there were several slow monotonous, occasionally dissonant, songs being sung by a chorus of ghosts, including dear Aunt Lily herself included in full white lady regalia. Very young kids can get restless or sleepy with some parts of this. 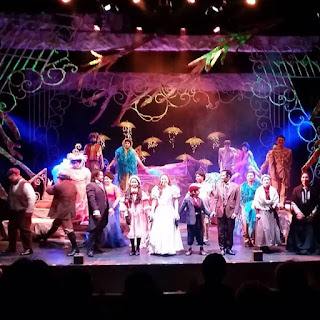 However, what kept the audience riveted were the performances of the talented all-Filipino cast, who never fail to bring even the most foreign of stories into vivid convincing life. Two children lead this cast: Ashlee Factor (as Mary) and Noel Comia Jr. (as Colin). The two kids did very well indeed. Factor had a harder time earning our sympathy since her character Mary was headstrong and disobedient, yet eventually she also won us over with her perseverance and good heart. Comia on the other hand gave a winningly charming performance despite being in a difficult role that required him to be a miserable cripple.

Among the adult cast members, I would cite Caisa Borromeo and her ethereally pristine soprano as the ghost Lily to be the best vocal performance in this show. Her songs were the most melodious of the lot, namely "Come to My Garden" and the exquisitely beautiful "How Will I Ever Know". Lorenz Martinez had a rather drab role in Archibald, but he gets to showcase his tenor my personal favorite song in the show, "Lily's Eyes", a duet with Noel Rayos, who had just the right touch of sinister as Archie's brother, Dr. Neville Craven. Becca Coates in the role of the maid Martha shines in her featured song number "Hold On". There were probably only two upbeat songs sung by young gardener Dickon (a chipper Red Concepcion), that manage to cheer the dark mood up for a while.

All in all, this was a very pleasant way to spend a couple of hours, transported to aristocratic England.  For me, it was worth it just to see "Lily's Eyes" and "How Would I Ever Know" performed live in the proper context within the play. The more eventful second act is more engaging than the somewhat turgid first act. The magical transformation of the generally gray and colorless set and costumes at the end made for a moving final tableaux which will make you smile.