Review of Trumpets' THE HORSE AND HIS BOY: Spellbinding and Spectacular! 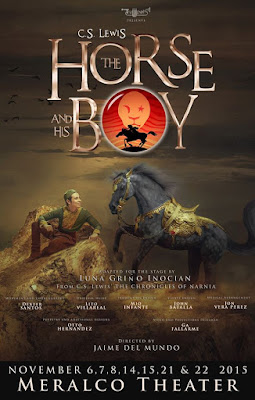 I confess that only know of Narnia from the 2005 film "The Chronicles of Narnia: The Lion, the Witch, and the Wardrobe". I have never read any of the classic C.S. Lewis books. When news about Trumpets releasing a locally-written stage adaptation of the fifth Narnia book "The Horse and his Boy," excitement ran high on social media. I honestly had no idea what the book was about. But I know how Trumpets always came up with excellent stage productions of world-class quality, like "N.O.A.H." and "The Bluebird of Happiness". I know I needed to watch this new show. 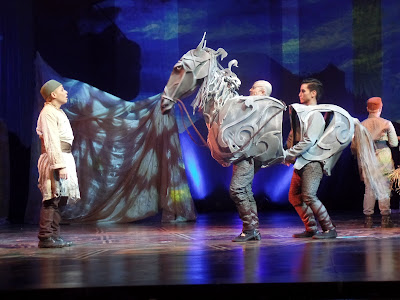 A poor boy named Shasta meets a noble (and talking) war horse named Bree. Bree convinces Shasta to leave his slavehood behind and go with him back to his home in Narnia. Meanwhile, a young girl also ran away from home on her loyal (and also talking) horse Hwin in order to escape an unwanted marriage. The two meet and decide to go to Narnia together to escape their cruel fates. But when they learn that Narnia was in danger of an enemy attack, they pick up their pace and traverse the wide harsh desert in an effort to save Narnia from grave harm. With encounters with kings and queens, doppelgangers, haunted gravesites and a giant lion along the way, their quest was an epic adventure of fantastic action and romance. 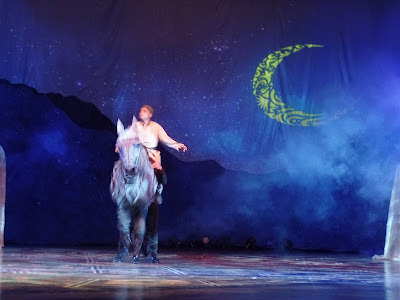 Shasta Riding Bree in the Moonlight

With the title alone, we know that a horse will figure prominently in the story. Curiosity was high as to how they will portray this vital character on stage. Once we see Bree for the first time though, we gasped in wonder at how this magnificent animal looked and moved. The pride and bossiness courtesy of Joel Trinidad (and the men behind him) truly made Bree come alive so realistically, imbued with Trinidad's trademark sense of humor. The female horse Hwin was brought to life by Jill Pena (and the men behind her) in the same elegant way. That impressively breathtaking scene when they were "rushing" through the desert was a successful stage illusion with lights care of John Batalla and movement by Dexter Santos. You should see how the horse reared on their hind legs! 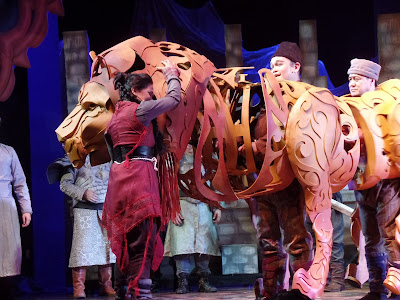 Aside from the horses, as this story was in Narnia, we were also excited to see the majestic revered lion, Aslan. The mechanism within this great beautiful beast looked heavier than the horse as he looked like he was made of wood. Jeremy Domingo's booming voice was kingly, fatherly and awe-inspiring as it should be for this iconic role. There would also be Mr. Tumnus the faun as campily played by Nic Campos, and the Sallowpad, the raven who foretold the future, played by Maronne Cruz. 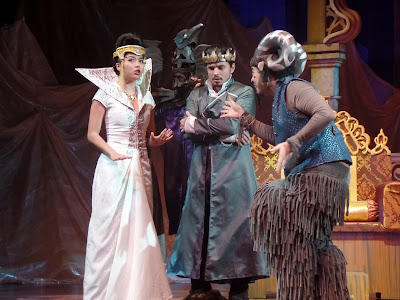 Reb Atadero had that face of unspoken wonder and naivete, which made him very good for the role of Shasta. Cara Barredo was feisty and fiery as Aravis, a girl who knew what she wanted and who can take care of herself. The character of the Storyteller grew more and more involved in the story in a most fascinating way, as portrayed by Mayen Cadd and her melodious voice. Mako Alonso was over-the-top villainous as Rabadash. Arya Herrera stole scenes as Aravis' funny and talkative friend Lasaraleen. Steve Cadd had strong presence both as the wily sheik Tisroc, as well as the Viking-like King Lune. 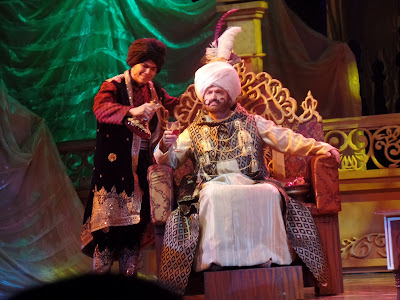 In true Trumpets tradition, the whole production was, in a word, magical. The action began slowly as the Narrator started to tell her story on an empty stage, with just a map of Narnia projected on a simple cloth background (graphic designs by GK Fallarme). But with scene after the scene after that , the audience is transported to exotic lands of opulent palaces, battlements and ramparts. and talking beasts. Mio Infante has certainly outdone himself once again as he created these huge wonderful set pieces that transformed the spacious stage of the Meralco into this whole new fantasy world. Infante was also responsible for the elaborate Arabian-inspired costume design. Puppetry and shadowplay by Otto Hernandez added to the mysterious allure of the scenery and storytelling. 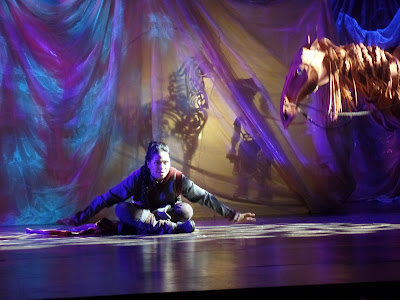 Ms. Luna Grino-Inocian is a most talented writer who was able to wonderfully adapt the book for the stage, and we know the Narnia books are not exactly simple material to successfully transpose into other media.  She loves Narnia and her writing obviously reflects this. The way her script made the revelations come logically one by one made the story compelling, engaging and easy to understand, despite the multitude of characters with difficult to pronounce names. All the way to the end, we will receive yet another welcome and awesome surprise to cap the whole magical night. (Ms. Grino-Inocian also wrote Trumpets' 1997 musical adaptation of the first Narnia book "The Lion, the Witch and the Wardrobe", which sadly I was not able to watch.) 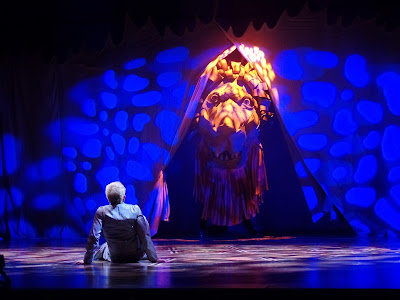 Shasta's Vision in the Desert

Congratulations to Director Jaime del Mundo for bringing all this homegrown talent together into one cohesive and memorable project. There were some songs here sung by the Storyteller, as well as touching duet by Shasta and Aravis, but this is not really a musical, as Trumpets was more known for. Del Mundo's gamble on a big project like this has definitely paid off as this would go down as one of Trumpets most artistic accomplishments.