Review of PETA's 3 STARS AND A SUN: Futuristic FrancisM Fervor 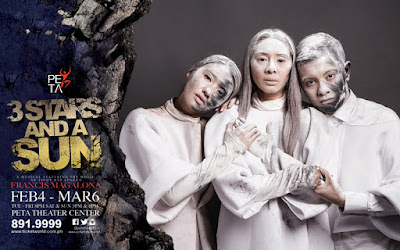 As their followup to the phenomenal success of "Rak of Aegis" which ran for two hundred shows (or even more), PETA decided to mine the musical and lyrical legacy of another iconic Filipino artist -- hip hop legend Francis Magalona. Decidedly, the subject matter of FrancisM's rap songs are very serious social and political commentary which makes it a natural fit with PETA's socio-educational advocacies. The title alone announces proudly the nationalistic fervor of this play.

It is 2096 and what is left of the Philippines is contained within the confines of a metal dome called the "Stormdome". Led by their ruler Grand Vidame Inky, the rich live in clean and white comfort in Lumino City. The poor live in dank and dirty darkness in the bowels of Diliman City, scavenging and recycling the garbage of the elite. Those caught plotting against the ruling class though would lose all their memories via a cruel process called "reconditioning".

A rebel group called Tropang Gising led by the feisty Sol plot on overthrowing the Grand Vidame to reverse the status quo.  Inky's children, the impulsive Chino and the idealistic Diane were also coming to their own respective realizations about their mom and her ruling style. One fateful day, these young people meet Mang Okik, a mad ancient hermit who knew Inky's father Rasputin, the old man tells them about the Philippines and her heroes they never knew, before the Stormdome was ever built. 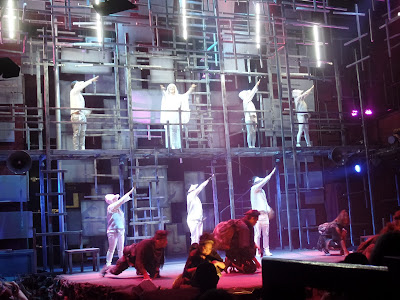 The unnerving action begins during the National Anthem itself. While the audience was singing, taser-toting guards of Lumino (called Protektanods) were ordering us to stop singing. It is not common that we see a dystopian play in Filipino, so the futuristic setting and culture they present was very interesting. The starkly and diametrically contrasting fashion sense of the rival cities, white vs. black, was a bold statement in itself.

Thankfully, the language was not as exclusive for each city. All the characters in both Lumino and Diliman knew how to talk in Filipino, as well as in English. Those in Lumino though were more comfortable in speaking English, but they were not averse to speaking in Filipino, accented with twang as it may be. Having to sing the songs of Francis M made it necessary for the citizens in both cities to be well-versed in both Filipino and English. 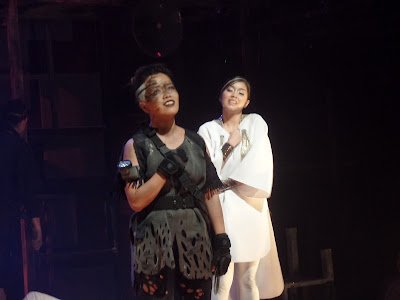 Myke Salomon, who won accolades from his first stint as Musical Director for "Rak of Aegis," is bound to earn more recognition for this project with his inventive re-arrangement of the Francis M songbook. I admit I was not too familiar with all the FrancisM songs used in this play. "Mga Kababayan Ko" was a rousing opening song number. "Kaleidoscope World" became a lullaby which would be a key to remember erased memories. "Meron Akong Ano," "Ito Ang Gusto Ko" and other less familiar raps and ballads were given a striking new arrangement as conversations involving different characters, either duets, quartets or as an ensemble. The cast were all very good in both singing, rapping and acting aspects.

Gold Villar gave an impressively strong and athletic performance as Sol. Her female perspective on this role will definitely be different from the attack of her male alternate for the same role, Nicco Manalo. Manalo had previously done a rap musical with a political tone before in Tanghalang Pilipino's "Kleptomaniacs," also playing a poor guy from a squalid neighborhood.

Raffy Tejada gave a very moving performance as Mang Okik, laced with just the right amount of humor. (His alternate is another theater veteran Bodjie Pascua.) His history lesson scene was truly a critical turning point in the narrative of this play.

John Moran had a very strong tenor which he put to great use in his role as Poy. His scene mourning the loss of a dear friend was heartbreaking with his plaintive Filipino-reworded version of "Cold Summer Nights". (His alternate is Nar Cabico.) 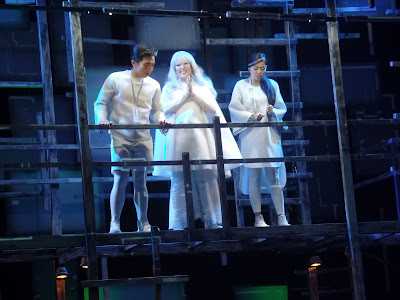 Che Ramos-Cosio was beautiful yet imperious as Vidame Inky. I saw her first in an indie film "Mariquina" and as a supporting character in Red Turnips' "Rabbit Hole". Here she really breaks loose with a powerful and memorable performance. (Her alternate is Carla Guevara-Laforteza, whom I have not seen in a Filipino play before, so that should be interesting.)

Justine Pena was the voice of our conscience as Inky's frustrated daughter Diane and she was able to earn our sympathy for her plight. (Her alternate is Giannina Ocampo, who should also do very well.)

Ever-reliable Gio Gahol debuts in this show as Inky's brash son Chino. His best moment was "Living in the Wild," a powerful rap duet with his sister Diane which Gahol and Pena nailed so well. (His alternate is Paolo Valenciano.) 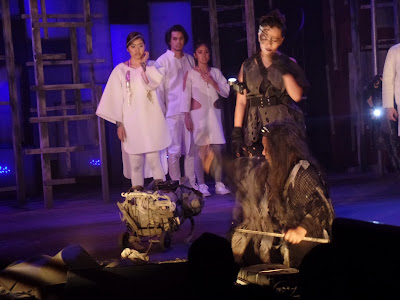 Being educated by Mang Okik


The first thing you notice upon entering the theater is the imposing scaffolding of metal occupying the stage reaching all the way up to the ceiling. This was a grand brainchild of production designer Gino Gonzales.  The lighting design of Ian Torqueza was very haunting and cinematic, particularly during the climax and denouement in the final act. Multi-talented Delphine Buencamino was responsible for the energetic choreography. Teresa Barrozo handled the sound chores creditably as always.

The pacing of the storytelling in Act 1 was rather slow on the build up, and you may feel the lag. However, when the character of Mang Okik came on the stage and gave his history lesson, the story becomes clearer and you will realize with awe how big this whole scenario is. The whole Act 2 will keep you on the edge of your seat up to that explosive climax, when the audience exploded into spontaneous applause.

Director Nor Domingo successfully achieved the futuristic vision of visionary writers Mixkaela Villalon and Rody Vera, with the music and lyrics of Francis M fitting right in perfectly. The patriotic message it proclaimed was unmistakable, clear as crystal. Big kudos to cast and crew for another audacious and timely production! 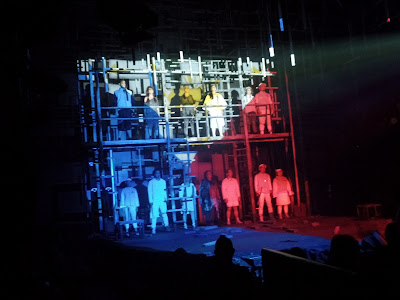