Review of Artist Playground's HAPPINESS IS A PEARL: Lost in Love 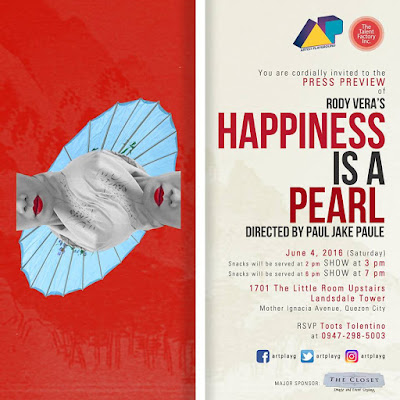 Artist Playground opens its second season with an original play written by prolific playwright Rody Vera six years ago, entitled "Happiness is a Pearl." This is the first time this play had ever been staged for the public. The young theater company pushes the envelope with daring material that is for mature audiences only.

In the center of "Happiness is a Pearl" is a love triangle. Kenji is a Japanese gigolo who knew how to pleasure the ladies with his "equipment" uniquely enhanced by a pearl. Mari, a Japanese woman married to a rich businessman, could not resist Kenji's company for the ecstasy that he gives her. However, Kenji's heart had fallen for Maria, a Japayuki in a seedy Filipino bar in Chiba. As a confrontation among the three lovers was inevitable, each one realizes what they had to lose to gain the happiness of love. 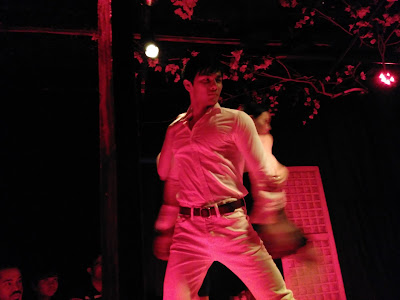 The interior of the Little Room Upstairs where this play was staged was rearranged to fit a bigger diagonally-set stage with three substages. The audience sat on three sides of this stage, offering a different view of the action onstage. The ceiling was adorned with pink florets looking like cherry blossoms to symbolize the Japanese setting of the play. Some movable frames were set on the posterior stage, but I did not exactly get what these frames were supposed to represent. 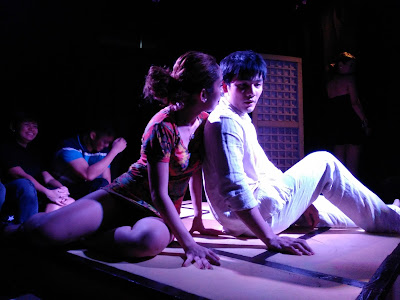 Of the three main actors on the stage, the one that easily commanded attention by his mere physical presence was the newcomer (with the shortest CV) who played Kenji-- 22-year old indie film actor Tomas Miranda. He is a handsome well-built young man, with penetrating eyes which actually made him look Japanese. He acted with confidence, belying the fact this is was his very first theater production, Japanese accent and various stages of undress notwithstanding. (Jerome Rosalin alternates as Kenji.) 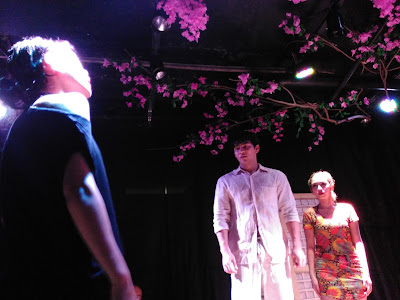 The two ladies who shared the stage with Miranda also had their respective moments to shine. Cath Go played the Japanese matron Mari as an obsessed lonely lady who was willing to buy her way to her happiness. This was the only character supposedly based on a real person. Ira Ruzz (who previously made a good impression as Flerida in Gantimpala's "Florante at Laura") played the entertainer Maria with typical homespun charm, very Filipina in attitude in situations of adversity. (Ruth Alferez alternates as Mari. Shiela Espina alternates as Maria.) 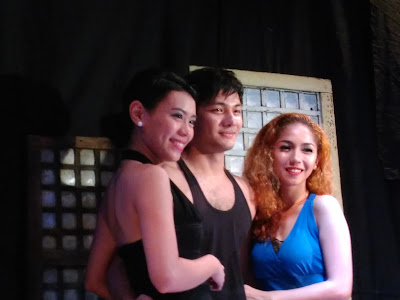 The extreme limitations of the stage space makes this play a challenge in blocking for director Paul Jake Paule, so that the audience around will get to see everything that was happening on stage. However, an even more difficult challenge was for choreographer Lezlie Dailisan. The choreography of the tangos danced by the three main actors was emotionally communicative, one of the best and most memorable aspects of this show. Despite the fact that Miranda, Go and Ruzz had no previous dance training, they were able to execute all the daring lifts and flips with grace and aplomb, very impressive all.

"Happiness is a Pearl" is staged at The Little Room Upstairs, Rm. 1701 of the Landsdale Tower along Mo. Ignacia (cor. Timog Ave.) in Quezon City. The play shall run from June 9 to July 3, 2016 with 7 pm shows from Wednesday – Friday; 3 pm and 7 pm shows  every Saturday and Sunday. For tickets and inquiries, visit Artist Playground's FB Page  or contact 0926 932 3179. Strictly for ADULTS only.