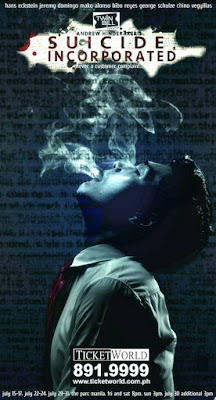 Talking about death is uncomfortable enough, but more so if that death was a suicide. Family and friends of a suicide victim would almost always suffer severe guilt feelings about why they were not able to see it coming, and no one wants to talk about it. It is this taboo topic of suicide gets a tragicomic treatment in this maiden production of a brand new theater company, Twin Bill Theater, as it audaciously stages Andrew Hinderaker's 2010 Off-Broadway play “SUICIDE INCORPORATED.”

For this production, we get introduced to a new theater venue in San Juan City. It is along Lt. Artiaga St., which can be accessed either from N. Domingo or from Bonny Serrano Ave. You can see the name and logo of the place PARC (Performing Arts and Recreation Center) right there on the gate of #494. The play venue itself is an intimate room where the audience can sit on either of two sides of the stage. The backdrop is glass, stylishly decorated with names and quotes from noted people who had committed suicide. There is a TV screen to serve as an indicator where the scene was set. 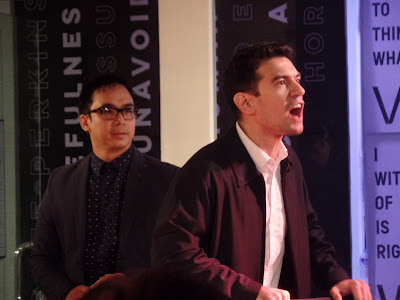 Legacy Letters is a company whose macabre business was to help people planning to commit suicide to write and edit their suicide notes. This was owned by a brash and ruthless businessman, Scott Daniel Johnson (Jeremy Domingo) who relished to profit from the agony of his depressed clientele. His staff writer Perry (Chino Veguillas) was ultra-loyal and devoted to his boss and his job, despite being constantly on the receiving end of Scott's insulting remarks.

A former writer of Hallmark cards, Jason (Hans Eckstein) was just newly hired. He was immediately assigned to take on the case of Norm (Mako Alonso), a distraught young man who was planning to commit suicide because could not move on from his failed marriage which ended in annulment. Meanwhile at home, Jason also had to deal with the issues of his younger brother Tommy (Bibo Garcia) who cannot seem to cope with college.

The script of Hinderaker was very well-written with a very fast tempo in its storytelling. However, while it was a dark comedy at heart, it was still very sensitive about the psychology of suicides, specifically among males. The direction of Steven Conde is very classy and smooth. There was no indication whatsoever that this was the press preview of a debut production. Everything went on so fluidly, from the flawless ensemble acting of its all-male cast to the faultless technical work of the crew (which includes Ed Lacson for the set, Jay Pangilinan for sound, and Joseph Matheu for the evocative lighting). 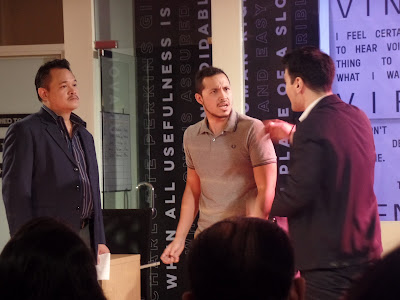 Jason speaks with Norm, as Scott looks on

This role of Jason was the most intensely dramatic role that I have seen Hans Eckstein attack. He really was able to convey the pressures and conflicts that his complex character experienced in both his new job and more so in his personal life, particularly his strained relationship with his brother Tommy.

Bibo Reyes, who looks very different from how I saw him first in "In the Heights" where he stole scenes as the smart-ass Sonny. His performance here as Tommy was more quiet and pained. He shone especially in that confrontation scene with Jason that brimmed with so much palpable bitterness.

Jeremy Domingo felt really at home and was clearly enjoying his role of Scott. This foul-mouthed alpha-male jerk of a character seemed to have been written with Domingo in mind, as he gleefully fit the role like a glove with a wry and dark comic sense that seemed second nature to this veteran actor.

Chino Veguillas played the nerdy effeminate Perry. His insecure jealousy about Jason and his obsession for Scott's attention and approval was just the comic relief needed to keep this serious script from totally wallowing in its misery. Veguillas would also take on the more minor roles of a policeman and a waiter in other parts of the play.

At first you think that the role of the customer Norm would just be a small one for Mako Alonso. However, the role expanded with every subsequent scene. By the final scene, Norm would have a lengthy soliloquy which would truly test any actor's acting (and memory) skills. Alonso rose to the occasion and nailed that challenging monologue infused with unbearable regret and guilt. (George Schultze will be alternating for this role). 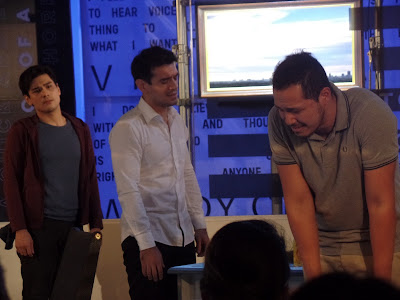 Tommy, Jason and Norm in an intense scene

The purpose of the producers Joseph and Francis Matheu for staging this show was not only for entertainment, but more importantly, they wanted to shed light and raise awareness on mental health issues regarding suicide. A doctor (probably a psychiatrist) will be present for every show to facilitate the talkback sessions they intend after each show in order to allow audiences to ask questions and even share their own experiences about the topic.

I would say that "Suicide Incorporated" is for suicide, as "The Normal Heart" was for AIDS. These prickly topics need to be addressed in public more to create more awareness for their prevention and management. A suicide occurs every 40 seconds somewhere around the globe. While the Philippines is said to have the lowest incidence of suicides in this side of Asia, this rate is steadily increasing in recent years.

This show would be good therapy for those who may be contemplating suicide because it gives vent to their frustrations and pent up emotions, and perhaps clear up their confusion. Furthermore, it is also good education for everyone else, to make us sensitive to possible signals potential victims  may be sending. Men, in particular, are addressed here because they generally do not talk about their feelings nor ask for help. Collapse in communication should be curbed as this is the big antagonist of all. Because of the acute awareness this play creates, it is hoped that a suicide or two could actually be prevented. 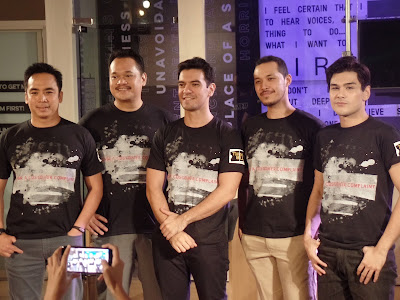 
“Suicide Incorporated” will run from July 15-31, 2016. It will have shows Fridays and Saturdays at 8 pm, on Sundays at 3 pm. There will be an additional 3 pm show on Saturday July 30. Tickets are available on Ticketworld.