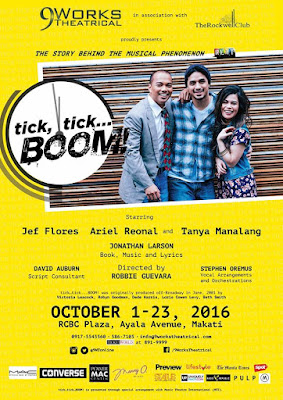 I knew this acclaimed off-Broadway musical entitled "Tick, Tick... Boom!" had been staged locally before. That first staging opened way back July 26, 2002 by Atlantis Productions, and starred Jet Pangan, Bituin Escalante and Michael de Mesa, directed by Bobby Garcia. In 2009, the Ateneo Blue Repertory staged another version, under the direction of Bea Garcia. Fortunately for us who had not been able to see this musical yet before, it is being re-staged this month by 9 Works Theatrical with a cast of fresh, up and coming theater talents, directed by Robbie Guevara.

This musical was written by the creator of "Rent" Jonathan Larson. It was semi-autobiographical in the sense that Larson himself experienced the frustration that came with trying to make it on Broadway. This musical was first staged June 2001 off Broadway with no less than Raul Esparza in the lead role. It had been re-staged and toured many times over since then.

New York City,1990. Jon is turning 30 years old in a few days but he is still waiting tables at a diner, yet unable to stage a show on Broadway as he planned. His best friend Michael was making serious money as a marketing executive, already owning a BMW. His girlfriend Susan, a dancer, had serious intentions of settling down and moving to Cape Cod. His agent was able to arrange for a public workshop of Jon's rock musical "Superbia," but it seems only his friends and family liked it, not the investors. The pressure clock is loudly ticking, ready to explode inside Jon's head as his birthday drew nearer.

This show originated as a one-man show, a "rock monologue" performed by Jonathan Larson himself. You can clearly see these origins in the show as Jon narrated everything happening around him and in his head. Script consultant David Auburn had the idea to add two more actors to play Michael and Susan, as well as all the other minor characters in the story. That led to more energetic onstage interaction as well as fantastic vocal harmonizing, as arranged by Stephen Oremus. 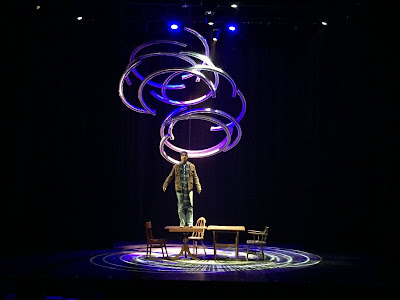 Jef Flores proved that his victory as Best Actor in a Play (for Red Turnips' "This is Your Life") in the Gawad Buhay awards last year was no fluke. He impressively pulled off this exhausting role of Jon with so much verve and energy. He was onstage the whole 1 hour and 35 minutes of the show (without intermission), delivering his monologues, singing, dancing, running around. We did not see him even take a single sip of water throughout the show. This was another amazing tour-de-force performance from this actor, the It-Guy of the local theater scene these days.

I saw Tanya Manalang perform for the first time. She just played Kim for two years in London's reboot of Miss Saigon, and as one of the Aileens in "Rak of Aegis". Manalang played not only Susan, but also Jon's agent, Michael's snooty colleague and "Superbia" lead actress Karessa. As Karessa, Manalang really ripped through her big solo number "Come To Your Senses" with showstopping diva aplomb. I thought there wasn't really much romantic chemistry between Tanya and Jef, but their vocal chemistry was undeniable especially in the song "Therapy," my personal favorite song in the whole show.

I first saw Ariel Reonal as Favorite Son in the last 9 Works show "American Idiot", where he showed off his athletic dance skills. Here we see more of his gentler side and his comic timing as he played not only Michael, but also Jon's father, an Indian shop owner and even Jon's female agent (in one surprise scene). His big showcase number "Real Life" showed off his rich and warm vocal chops.

The stage of the Carlos P. Romulo Auditorium at the RCBC Plaza seemed to big for this intimate 3-actor play. To occupy the big blank space above the actors, stage designer Mio Infante came up with the idea to hang a beautiful multi-layer mobile of circles, seemingly to represent the swirling thoughts and the clocks ticking in Jon's head. This set was enhanced by Martin Esteva's lights. The choreography of Arnold Trinidad in upbeat songs like "Sugar" was fun to watch. Always great to hear a live band provide music for a musical show, care of the 9PO (led by musical director Daniel Bartolome).