Review of Globe Live and 9 Works' A CHRISTMAS CAROL: Holiday Heart and Humility 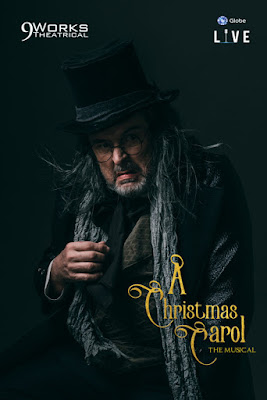 "A Christmas Carol" by Charles Dickens is probably one of the best-known Christmas stories. The name of its lead character Scrooge had become part of the English language to be mean someone who hates Christmas. A musical version of this classic  had been written by Alan Menken (of Disney musicals fame) with lyrics and book by Lynn Ahrens (who also wrote "Ragtime", "Once on this Island" and "Anastasia" among others). 9 Works Theatrical, in partnership with Globe Live, brings this 1994 show to life this year at an outdoor amphitheater, Globe Iconic, in the Central Square of Bonifacio Highstreet in Global City.

Ebenezer Scrooge is a busy and bitter money-lender who does not think Christmas is a special day of the year. That Christmas Eve, he was visited by the ghost of his dear departed friend and business partner Jacob Marley to warn Scrooge to change his ways lest he suffer in chains like him.  Scrooge was visited by three ghosts who showed him scenes from Christmas Past, Christmas Present and Christmas Yet to Come. Realizing the errors of his ways, Scrooge became a changed man upon waking up Christmas morning and sought to make amends with the people he had been mean to all these years.

At first I thought that this new production was a remake of another "Christmas Carol" musical staged by Repertory Philippines just two years ago. It turned out that I was mistaken. That former show by Rep was entitled "Scrooge" with book, music, and lyrics by Leslie Bricusse. One of the reasons for my confusion was the casting of Miguel Faustmann again here in the lead role of Ebenezer Scrooge. With his looks and age, Mr. Faustmann is really the first local theater actor that comes to mind to play Scrooge, and he knows the role only too well. He attacks his grumpy role with an endearing wit, which enables him to make his audience empathize with Scrooge's scarred "bah humbug" psyche.

The visual spectacle of this show lay in the manner of how they stage and portray the appearances of the four ghosts. Ariel Reonal is really making a name for himself in the local scene with his very energetic performances in the last two 9 Works shows, "American Idiot" and "Tick Tick Boom". As Jacob Marley, Reonal plays him as a manic ringleader, heading an entire ensemble of creepy zombies with various deformities to haunt Scrooge.

The scenes of the Ghost of Christmas Past were very charming , with the portrayal of Young Scrooge by Al Gatmaitan and his lady love Emily by Mitzie Lao. The "Fezziwig's Annual Christmas Ball" scene was a joyous and comic highlight as choreographed by PJ Rebullida and Yek Barlongay. Jun Ofrasio played Mr. Fezziwig with over-the-top glee. However, the rather low-key and genteel portrayal of Norby David of the Ghost of Christmas Past himself felt weak in contrast with all the energy around him.

Ghost of Christmas Present was portrayed with imposing heft by Franz Imperial, with his booming high-range baritone vocals. The scenes in in Bob Cratchit's (Raul Montesa) humble house were very moving especially with the adorable portrayal of Dewayde Dizon as Tiny Tim. My only comment on that segment was that the sexy costumes and dance moves of the ladies in that office party scene were a bit too risque to be child-friendly.

Ela Lisondra again impresses us with her complex yet graceful dance moves as Ghost of Christmas Yet to Come. When she also played Blind Old Hag in other scenes, we hear her beautiful crystal-clear voice. The startlingly frank and dark spooky visions Scrooge sees in this segment can really shock anyone into humility and repentance. 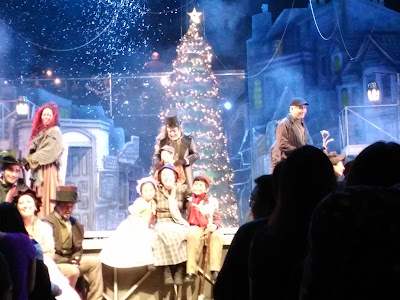 Snowfall and Christmas Tree bring on the holiday spirit!

From the prodigiously creative brain of scenographer Mio Infante, the technical crew of 9 Works was able to recreate a district in old London on that big stage with another impressive multi-tier set, with smoky chimneys to complete the illusion. When the snow fell during the finale, we felt we were actually there in London. The beautiful Victorian age costumes (by Twinkle Zamora  and Ian Cataralba) looked very rich and authentic, and these were further enhanced by the hair and makeup by Myrene Santos.

I did have some problems with some blocking decisions, even when I was seated along the center aisle. There were several scenes when Scrooge had his back turned to the audience in the downstage area center, and this blocked the view of the actor he was facing, performing on centerstage. In the finale song number, there was a tall female child standing in the forestage area, and she totally blocked the view of Scrooge carrying Tiny Tim standing on centerstage.

Aside from these minor side comments, director Robbie Guevara once again delivers a very classy world-class production. Also deserving citations were the lighting design of Martin Esteva (so critical for the atmosphere of the ghost scenes) and the sound design of Jaime Godinez and Rards Corpuz (so challenging for an outdoor venue like this). Maestro Daniel Bartolome passionately leads the 9 Works Philharmonic Orchestra in their live performance of the grand musical score that accompanies this show.

Kudos to all the members of cast and crew of this production, which could honestly be an annual holiday event right there at the heart of BGC for years to come.

Now on its second week, "A Christmas Carol" still has five shows left, on December 17-18, 21-22 at 8PM and a special show on Christmas Day itself December 25, 2016 at 7PM. Venue is at the Globe Iconic Bonifacio Highstreet Amphitheater, 7th Avenue, Bonifacio Global City. Ticket price is P2,100 for all sections.

Globe Live and 9 Works intends to make "A Christmas Carol" a Christmas tradition in BGC and I have no objection to that fantastic idea. For this 2017 show, the music and the songs  are the same, but director Robbie Guevara had made some big changes to make this 2017 edition distinctive from the previous 2016 production described above.

The most significant change employed was the the set. Before, there was a huge three-tiered London town with elaborately detailed houses where the characters moved in. This year, as designed by Ed Lacson, Jr., there were only three houses onstage with more simple details. Above the houses as the main centerpiece was a giant tilted clock with moving hands to indicate the time when the ghosts appeared. Instead of a giant Christmas tree onstage at the climax, a giant Christmas wreath took its place in front of the clock.

The lighting design of Shakira Villa Symes enlivened the set, as well as enhanced the ghostly visions Scrooge was having onstage. Tricky body doubles were used to make Scrooge appear on different parts of the set and later materialize somewhere on a bed or a chair somewhere else, and lighting was critical for this new staging gimmick, as well as that very creative visual illusion of men digging dirt in in the foggy graveyard, as shown by the Ghost of Christmas Yet to Be. 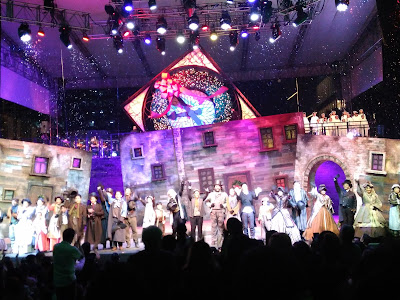 The relative simplicity of the set and streamlining of the scenes made the morality story of Ebenezer Scrooge stand out more. The flow of the story felt more fluid than before. (I still have my reservations about those risque burlesque girls in the beginning of Act II like before as being rather inappropriate for a children's show.) Having played Scrooge very many times before, Miguel Faustmann is able to effectively embody the hateful character with much more humanity and warmth than before.

The new casting is also quite affecting. The ever-energetic Noel Rayos played two exhausting over-the-top characters here -- Jacob Marley's ghost and Mr. Fezziwig. Franco Laurel is back after a three-year hiatus to play Ghost of Christmas Past and he did with much flair. Nico Dans with his long hair and hefty build was a standout as Ghost of Christmas Present. Jon Abella gave a touching performance as Bob Cratchit, together with the cute child actor Jaime Yupangco who played Tiny Tim. Laurence Mossman played a dashing Young Ebenezer Scrooge to Mitzie Lao's Emily, and they had a great duet version of "A Place Called Home" together. Arman Ferrer's singing voice as Scrooge nephew Fred Anderson is dominating in its depth and clarity.