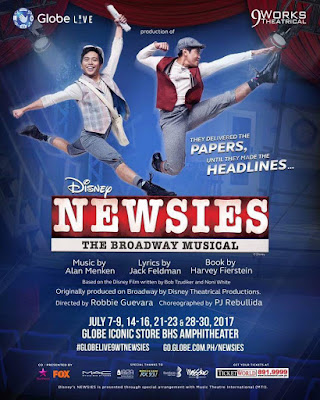 The journey of "Newsies" began as a musical film in 1992, inspired by the true story of the Newsboy Strike of 1899. It featured music and songs by Alan Menken and Jason Feldman, directed by Kenny Ortega. It starred an 18-year old Christian Bale in the lead role of Jack Kelly. The film was panned by critics and bombed at the box-office, winding up as one of the lowest-grossing Disney films of all time. Ortega, along with supporting actors Robert Duvall and Ann-Margret were nominated for Razzies.

Disney was still confident about its material though. It got Broadway master Harvey Fierstein to write the book for a theater musical play based on the movie. The show still contained most of the Menken-Feldman songs from the film, with the notable exception of "High Times, Hard Times" which actually won the Razzie for Worst Song.

When it debuted on Broadway in 2012, "Newsies" had a complete reversal of fortunes. The musical show was a critical success and box-office smash. It went on to be nominated for 8 Tony Awards including Best Musical, Best Book (for Fierstein) and Best Lead Actor in a Musical (for Jeremy Jordan), winning two for Best Choreography (Christopher Gatelli) and Best Musical Score (Alan Menken).

Jack Kelly is the leader of a group of poor orphan newsboys in New York City. One day, the owner of the New York World, Joseph Pulitzer, suddenly decided to raise the cost of the newspaper for the newsboys, in order to get more profit for himself. Jack, as helped by his smart new friend Davey and female reporter Katherine Plumber from rival newspaper The Sun, rallied his other newsie friends to rise up and strike against the newspaper mogul.

Like "American Idiot" and "A Christmas Carol" in the last two years, Globe Live in full partnership with 9 Works Theatrical stages "Newsies" at the Globe Iconic Store Amphitheater at the Bonifacio High Street in Taguig. Unlike the last two shows, the outdoor venue was enclosed with walls perhaps in preparation for rainy July weather. When we watched last night, we can hear that it was raining cats and dogs in BGC, but we were kept completely dry inside the venue.

As designed by Ed Lacson, the stage looked more compact than the one used for the two previous shows. It had five huge metallic-looking, movable, multi-tiered sub-stages on which the story will unfold. The center area converts to the Pulitzer's office, Ms. Medda's burlesque theater, or Jacobi's deli, with the use of appropriate furniture. The lights were designed by Martin Esteva. The turn of the century costumes were designed by Eric Pineda. The live orchestra was led by musical director Daniel Bartolome. 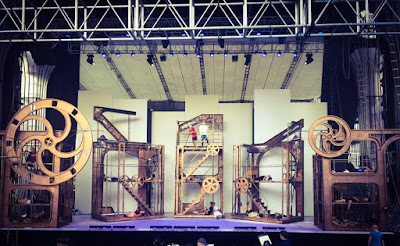 (photo from the 9 Works FB page)

The dancers get you energized from the get-go up to the grand finale. Choreographer PJ Rebullida had to create original dance moves because the rights to the Tony-award winning choreography was not included. The performers cast as the Newsies are mostly seriously trained dancers of different disciplines of dance -- ballet, jazz, folk, hiphop, cheerdance. All those powerfully muscular jumps, jetes, splits, tumbles, cartwheels, front and back flips, spins and pirouettes by the Newsies had the girls in the audience shrieking with delight.

My personal favorite number of the whole show was the amazing and exhilarating "King of New York" tap dancing exhibition that opened Act 2. There is something about tap dancing that is so clean, so elegant and so happy, I simply enjoy watching a good tap routine. This scene happened just after the defeated Newsies were cheered up by having their photo and story on the front page above the fold, hence the exuberant uplifting joy. The additional choreography for tap in this number is by Yek Barlongay. 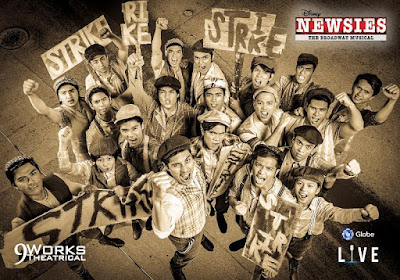 
Gian Magdangal took a long leave from the local theater scene by working abroad in HK Disneyland. He may be already too old to be 17-year old Jack Kelly, but his wide-eyed idealism in his face and boundless energy in his feet convinces us of his youthful spirit. He was required to sing soaring ballads which he definitely nailed in both notes and emotion. His best numbers were the painful "Santa Fe (Reprise)" that closed Act 1, and the romantic "Something to Believe In," a duet with Katherine.

Jack Kelly's love interest in this play Katherine is played by Danielle Chopin. Although her name is not familiar to us, this winning Fil-Am soprano grabbed the audience attention from her first time we see her pretty face. Katherine is ambitious, independent and resourceful. She is definitely not the typical damsel-in-distress trope. In fact, she even helped get Jack out of messes he got himself into. Chopin captured Katherine's pluck in her performance. She was very charming in her solo number "Watch What Happens."

Busy and popular stage actor Jef Flores plays Davey. With the clean-scurbbed look of his character, he stood apart from the other unkempt, dirtied-up Newsies. He sings mostly in group songs without a specific featured number on his own, but his voice was best heard when he took the lead in singing "Seize the Day." Davey's precocious 10-year old brother Les was played last night by very confident Daniel Drilon. This child actor has an impressive stage credits for his age and should be someone to watch in the future. (Tory Cortez alternates in that role.)

A major supporting role was given to theater newcomer Luis Marcelo as Jack's crippled friend Crutchie. He has an emotional featured song solo as he wrote an impassioned "Letter from the Refuge." The main antagonist role of Joseph Pulitzer is played by American actor Greg Dulcie who really embodied that rich, cunning yet heartless, abusive character with his imposing physical heft and stage presence.

Most of the actors shift different roles within the show, some playing up to four different characters with just a quick costume change. Ariel Reonal gets to play paper dispatcher Wiesel, deli owner Jacobi, the Mayor of New York, Medda's stage manager, and a Newsie. Chesko Rodriguez gets to play a Pulitzer staff guy, a photographer, a policeman and a Newsie. Melissa Bell gets to play Pulitzer's secretary Hannah, one of Medda's Bowery Beauties, a nun, a goon and a Newsie.

Raymund Concepcion gets to play the barber Nunzio, a policeman and Gov. Teddy Roosevelt. Joni Galeste plays a Bowery Beauty, a nun and a Newsie. Pinky Marquez not only plays Ms. Medda Larkin (with her own solo song "That's Rich"), she also plays her diametrical opposite, a nun. Even Shrek actor big guy Franz Imperial, who plays the shady bad guy Snyder, gets to dance as a Newsie! Talk about versatility indeed. 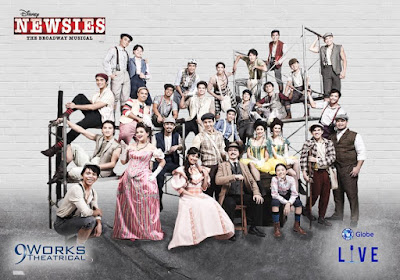 Globe Live is Globe Telecom’s thrust to elevate production quality of live events to international standards. It was only with the trust of the Disney Company in Globe Live that made it possible for the rights of "Newsies" could be acquired. With his background in professional equity theater in the US, Globe Live head Joseph Caliro personally advised 9 Works on the technical aspects of their co-produced shows. When Caliro engaged the audience in a short pep talk before the show last Saturday, he shared that Disney executives were in the house the night before (Gala Night was Friday July 14) and they loved this local production of their show.

Truly I never thought I would enjoy a play about such a dry stuffy topic as a newsboy strike at the turn of the previous century. But all the goodwill, energy and talent seen onstage last night changed that initial impression. Director Robbie Guevara said in his notes that Dance is less prioritized form of stage artistry, compared to acting and singing. With this new show "Newsies," 9 Works aimed to change all that, and set out to set a high bar for dance. It is a given that Filipinos are excellent actors and singers, this show wants to showcase Filipino dancing prowess as well. -- AND IT DEFINITELY DID! Kudos to all the cast and crew!

"Newsies" opened last July 7, 2017 and will run all Fridays to Sundays of July, up to July 30, all 8 pm shows only, no matinees. Venue is at the Globe Iconic Store, Bonifacio High Street Amphitheater, Bonifacio Global City, Taguig. Tickets at one price only, P2090, via Ticketworld.

Based on our experience last night, this is one show where it might be better to sit a little further back so you can take in the whole stage all at once. We were seated at the second row yesterday. While we can clearly see the faces of all the actors, it can be difficult to see everything happening simultaneously all over the stage. Neck can also get tired looking up a lot, especially those scenes set on the top tiers.