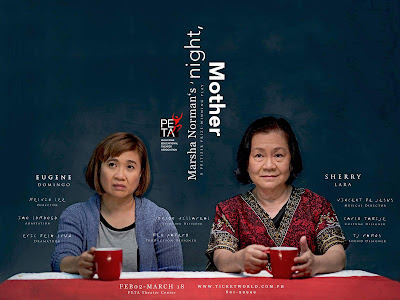 The 50th year anniversary celebration of PETA began with a blast in March 2017 with the restaging of their massive 2012 box-office hit "Care Divas". In August, PETA had a colorful and delightful new original show for children entitled "Tagu-taguan, Nasaan ang Buwan?" Just last November, PETA returned to its original stage at the Rajah Sulayman Theater in Fort Santiago to stage "Ang Buhay ni Galileo." After those three bombastic shows with big all-star casts, PETA chose to close its golden season very quietly with this intense serious drama starring only two actresses.

A middle-aged epileptic woman Jessie, estranged from her building contractor husband and drug addict son, lived with her elderly widowed mother Thelma. One seemingly normal Saturday night, Jessie was preparing to give her mother her regular manicure. Without any apparent warning, Jessie calmly announced to her mother that she will be committing suicide later that night. Shocked and distraught, Thelma desperately tried everything she could as a mother to stop her daughter's fixed decision. 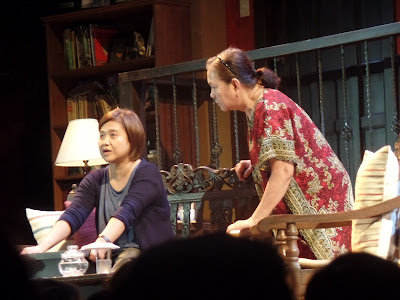 The original material was written by American playwright Marsha Norman. It won the 1983 Pulitzer Prize for Drama. It was first staged on Broadway in 1983 with Annie Pitoniak as Thelma and Kathy Bates as Jessie. It was nominated for a Tony for Best Play. It has a revival in 2004 with Brenda Blethyn as Thelma and Edie Falco as Jessie. In 1986, there was a film version starring Anne Bancroft as Thelma and Sissy Spacek as Jessie. As skillfully adapted into Filipino by Ian Lomongo, the play transformed into something so authentically Pinoy, you'd think it was originally written that way.

For an intimate two-hander play, the set by production designer Ben Padero was huge. It was a detailed interior of a bungalows with a typical design for the 1950s.  The living room had a sala set and television, with shelves full of books. Behind, there was a small flight of stairs up to go to their bedrooms. The kitchen had full cupboards, a working refrigerator and running water form the sink. Above we see some obvious wear and tear on the wooden parts of their house, betraying its age and lack of maintenance. It was a regular middle class Filipino household, could be ours or could be our neighbor's. 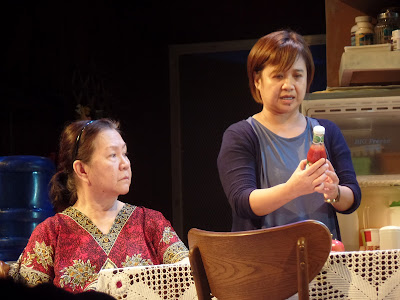 I had seen Sherry Lara before in plays like "Walang Kukurap" (MY REVIEW) and "Betang" (MY REVIEW), so I am fully aware of her acting talents. But her performance as Thelma is on a much higher level because she felt so real. We identify with her desperation and exasperation all the way from Jessie's startling declaration all the way up to that hair-raising ending. We hope we never have to hear that kind of statement ever in our lives and then live that devastating night down for the remainder of our lives. Yet Ms. Lara had to go through this emotional roller coaster with every performance.

We know Eugene Domingo more as a movie ("Kimmy Dora" immediately comes to mind) and TV comedienne. I had seen her act on stage before, also in PETA, five years ago in the stage version of "Bona" (MY REVIEW). She did not star in a play since then until now. Like Ms. Lara, Domingo played it so naturally. We know Jessie is a majorly depressed person, but for that evening, she was unusually chatty and lucid. Her plan was all laid out so neatly, so organized and thorough.  Domingo kept our attention riveted on her through all those mundane things she did all night. The whole performance is spine-tingling, knowing what it would be all leading up to. 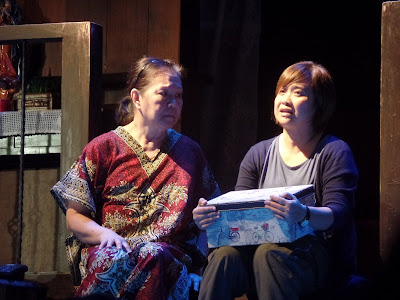 I had previously seen Director Melvin Lee sing and act as Chelsea in "Care Divas" (MY REVIEW), dance as Sabel in "Sayaw Sabel" (MY REVIEW) and direct in "Mapagbirong Haplos" (MY REVIEW).  For this new play, Lee made this heart-wrenching heavy drama also as much a heart-pounding suspense thriller. The lighting design by Jonjon Villareal and music by Vincent de Jesus all worked to hold us at the edge of our seats throughout its approximately 90 minute running time. Watching that real-time clock on stage was like watching a ticking time bomb about to explode.

After the play, the stage was set up for a debriefing Q and A session led with psychiatrists experienced with suicides. The intensity and sensitivity of the play's topic, coupled with the very realistic presentation seen onstage, demands such a session for the audience to discuss and ventilate about the traumatic event they just saw transpire in front of their eyes. May this play help us in recognizing suicidal depression and hopefully make positive action to avert any tragic consequences of such distressing mood disorders. 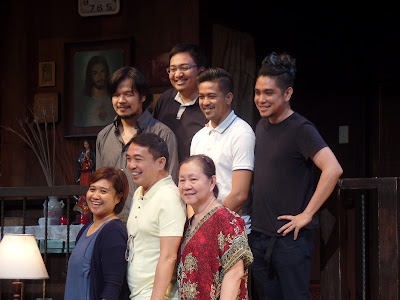