Review of THE LION KING: A Production of Pride and Pleasure! 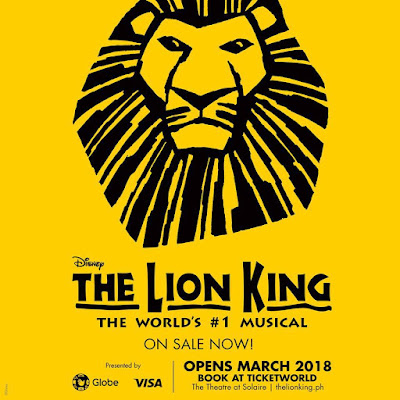 "The Lion King" (Roger Allers and Rob Minkoff, 1994) was one of the classic animated Disney films of the 1990s. Up to now, it still holds the current record for the biggest hand-drawn animated film of all time with a worldwide total gross of $766M in its initial release. It won the Golden Globe award for Best Motion Picture - Musical or Comedy, as well as for Musical Score (for Hans Zimmer). It won the Oscar for Best Musical Score and Best Original Song (to Elton John and Tim Rice for the song "Can You Feel the Love Tonight?").

After 20 years, it was announced that the international touring production of this play will finally be staged here in Manila at the Theater in Solaire. Excited Filipino theater fans welcomed this news with open hearts and wallets, with the show selling out quickly, several months before its March 2018 debut, despite the hefty ticket prices.

I tried to buy my tickets for my whole family to watch on the second day of release, yet I was only able to score seats in one upper corner of the side balcony. That was the only section left where I could get five seats in a row, so I grabbed them despite the not-so-favorable location. Therefore, this review is going to be based on where we sat last night, Seats 1-5 high up in Row SS.

The musical follows the animated film very faithfully. We recognize most of the songs and lines (and even the jokes) which were retained practically verbatim from the original script. Simba is the foolhardy son of Mufasa, King of the Pride Lands. One day, his jealous Uncle Scar arranged to have Mufasa killed, and blamed Simba for it. This guilt caused the cub to run off and leaving Scar to take over the throne. Years later, a mature Simba returned to challenge Scar and take over as the rightful King.

In this particular show, the main highlight happens right at the opening song number, “The Circle of Life”. It is here that we first see the fantastic puppet animals coming in one by one during Simba’s presentation ceremony at Pride Rock. So, coming late to this show is a big no-no, because no one will be allowed to enter the theater for the first 15 minutes once that song begins. Miss this opening number and you’ve missed the best number of the show. The moment those tall giraffes first entered the stage, followed by the birds, the cheetah, the zebras, the antelopes, the water buffalo, the rhinos, up to that massive elephant which came in from the audience area, we all gasped with awe and amazement.

The male lead lion characters had their elaborate masks worn on their necks and suspended over their heads. Those hyenas carried their heads on their hands as they lumbered around. Zasu was a bird puppet on a stick carried around by the actor. Timon was a full-body meerkat puppet with the actor in green right behind it. Pumbaa was a huge warthog costume (with a slobbering tongue) worn by the actor playing him. There were also costumes that gracefully represented the dancing grasses of the African savanna ("Grasslands Chant"). These ingeniously-conceived and executed puppets and costumes were really the main conceit of this show.

For the rest of the show, we looked forward to how they were going to stage all the famous songs in the film. “Be Prepared” was performed by Scar (a very slimy Antony Lawrence) and the Hyenas (delightfully disgusting Candida Mosoma, Bjorn Blignaut and Mark Tatham) on a huge set piece representing an elephant’s skeleton. “I Just Can’t Wait to Be King” sung by Young Simba (a spirited Gabriel P. Tiongson), Young Nala (a fiercely cute Felicity Kyle Napuli) and their feathered chaperone Zasu (a very comical Andre Jewson) had more imaginative animal puppets of more colorful designs to wow us with.

On the other hand, “Hakuna Matata” with Timon (an irreverent Jamie McGregor) and Pumbaa (a hale and hearty Pierre Van Heerden) had a relatively empty stage, with only four balloon "trees" on the side as props. This was a bit of a disappointment especially that it was the closing number of Act 1. The moving plants decorating the “Can You Feel the Love Tonight?” sung by the mature Simba (Calvin Grandling) and Nala (Noxolo Dlamini) were also rather stagnant and felt inadequate to provide a romantic atmosphere for this song.

There were some new scenes which were not in the movie. One was "Shadowland", powerfully sung by Nala  after she was sexually harassed by a lecherous Scar in a most disturbing preceding scene. The other was "Endless Night", where Simba  sings about his father's promises. But the most impressive new song is "He Lives in You" sung by Rafiki (Ntsepa Pitjeng), which ends with spirit of Mufasa (Mthokozisi Emkay Khanyile) speaking to Simba in a most astounding piece of stage magic.

Of course, there were some negative consequences for watching from the side balcony seats. While we can see the entire panorama of the whole stage from above, we also could clearly see big spaces between the characters, making the stage look emptier than they were intended. The emotional impact of Mufasa's death scene was not as strong as it was in the film. I'm sure these scenes would surely have looked more impressive from the Center Orchestra seats where the appreciation of stage blocking is perfect.

There were some lull moments in the storytelling, but the powerful African rhythmic music kept the energy up. Even if the view from our seats was not ideal, the sound quality was never a problem even in our remote location in Theater in Solaire's Siberia section, so we can hear everything clearly. Some characters like Zasu and Timon frequently broke the fourth wall, and injected Tagalog words and modern pop culture references (like "Frozen") in their lines to the delight of the audience. Overall it was a fun show to watch, and nostalgic for us fans of the animated film, kids and adults alike.