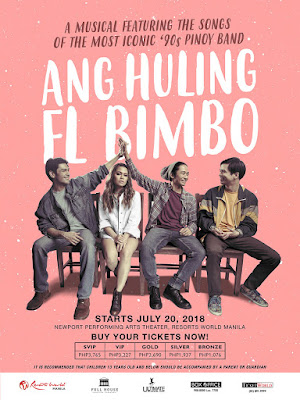 There are three jukebox musicals concurrently running in Metro Manila this month. I had already seen two: "Rak of Aegis" Season 6 (featuring the songs of Aegis) and "Eto Na! Musikal nAPO" (featuring the songs of the Apo Hiking Society. These two shows played things light and breezy, even if the characters were experiencing difficulties.

This third one opened last July 20 and had been playing to full house audiences for the past three weeks. I was only able to watch it today. Try as I did to avoid reading reviews before watching, I already got the idea that this was not going to be a happy musical. I expected darker tones from a musical like "Himala," but not a musical featuring songs of the local alternative rock icons of the 1990s, the Eraserheads.

The very first thing we see on center stage was a dead body covered with newspapers. Then we see three men get summoned to a police station at the behest of city councilor Arturo Banlaoi (Jamie Wilson). These three were our main characters: overworked office clerk Emman (OJ Mariano), closet homosexual Anthony (Jon Santos) and playboy TV director Hector (Gian Magdangal) -- old college buddies who had since became estranged for the past twenty years after graduation.

We then see flashbacks of the three as young guys in UP Diliman.  They meet and get close to Joy (Tanya Manalang), who worked in her Tiya Dely's (Sheila Francisco) Toyang's Canteen where they hung out.. Young Emman (Boo Gabunada) she considered her elder brother. Young Anthony (Topper Fabregas) she considered her best friend. Young Hector (Bibo Reyes) she considered her boyfriend. The four friends went to Antipolo one night to enjoy the view -- a fateful road trip changed their friendship and their lives forever.

Boy, those initial reviews were not kidding. The tone of this musical was dark with all four letters in bold caps. Of course, the college flashbacks began with pleasant memories of the three boys watching the Oblation Run and the Lantern Parade, and Sundays at ROTC. However, Act 1 ended on a very scary, chilling note -- with the music turned way up (as indicated by a radio volume band being flashed in red light on the backdrop) to muffle the commotion being committed. I was shell-shocked during the intermission.

Act 2 dealt with the miserable relationships the three men had with the women in their lives. Mylene (Yanah Laurel) felt Emman was too obsessed with his work. Eleonor (Wenah Nagales) was frustrated with Anthony's disinterest in his marital obligations. Ima (Maronne Cruz) was impatient with Hector's reluctance to commit. Adult Joy (Menchu Lauchengco- Yulo) did whatever she can to survive. All these depressing stories came to a head in a morgue scene. So yes, this was really not a happy musical -- it was downright morbid.

Out of the six main songs in Act 1, I only knew three. "Tindahan ni Aling Nena" was an upbeat comic romp of the three young boys buying goods at their neighborhood stores all owned by a Nena. "Pare Ko" was transposed to a march rhythm which accompanied their ROTC drills with rifles.  My personal favorite E-head song "Alapaap" was sung with the four friends driving a beat up Mitsubishi Lancer -- glorious.

Out of the six main songs in Act 2, I actually just knew two. "With a Smile" was given a downbeat mood sung during their graduation rites. But of course, the best was saved for last. I thought this final heartbreaking scene where the title song "Ang Huling El Bimbo" was performed was worth the price of admission on its own merit. It was absolutely the best-sung, best conceived and executed number of the whole show. A true showstopper indeed.

The show had very heavy themes, and my emotions are seriously taxed while watching the show. This show may not be for the very young, nor the very old -- they would not be able to relate.  Myke Salomon drew from his award-winning experience in "Rak of Aegis" to concoct this darker, thicker mixture of music. I thought I knew my Eraserheads songs, but I realized I did not know enough. Many songs I knew like "Ligaya," "Magasin," "Sembreak" and others were only heard in snippets. "Huwag Mo Nang Itanong" was used in an odd unexpected context.

The singing talent by the cast was of course was faultless, as always, with Gian Magdangal, OJ Mariano and Sheila Francisco standing out acting-wise. It was great to finally hear Menchu Lauchengco-Yulo sing in Filipino. There were some actors who felt miscast in a physical sense, because of age or height, like Jon Santos being the older Topper Fabregas, who was much taller than him. The sound of the orchestra and the microphones was not too pleasant-sounding during the show I watched, having a rather shrill tinny sound quality.

Director Dexter M. Santos really took a very big risk in telling such gloomy stories in such a big stage and venue. This is not a show to enjoy, but a show to feel -- and it is not a good feeling. You may or may not like that feeling. (All the sold-out shows would suggest that a lot of people are liking it.) However, as with all other RWM shows before, the production value of the show was solid. The sets designed by Gino Gonzalez were built big to fill the huge stage of Newport. The mood was enhanced by the lighting design by Monino Duque and the 90s couture by Marlon Rivera.

And to just to mention it again, by the time the truly magnificent "Ang Huling El Bimbo" number came along at the end, everything else that bothered you before it was forgiven.

"Ang Huling El Bimbo" opened last July 20, 2018 and will run up to September 1, 2018 at the Newport Performing Arts Center in Resort World Manila, with 8 pm shows every Friday, Saturday and Sundays, and 3 pm matinees on most Saturdays and Sundays. Tickets cost P3,500 for SVIP, P3000 for VIP, P2,500 for Gold, P1,800 for Silver and P1,000 for Bronze.  A check of Ticketworld showed that all remaining shows only have limited seats left.

"Ang Huling El Bimbo" had a return engagement this year from March 1 to April 14, 2019. When I saw it again today, the unfolding of the story in the beginning was a lot clearer than in the previous time I saw it. I am not really sure if it was because I already knew the story from before, but it sure seemed like new lines were added to clarify matters at the very onset. The senior cast I saw was the same one I saw last year, with Gian Magdangal, OJ Mariano, Jon Santos and Menchu Lauchengco-Yulo. (There was an alternate cast for this new run, with David Ezra, Myke Salomon, Rafa Siguion Reyna and Carla Guevara- Laforteza. Too bad I was able to catch their show this time, maybe the next run if ever.) 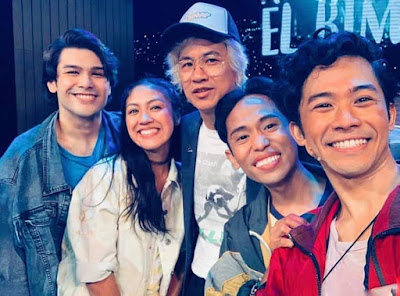 Bibo Reyes and Boo Gabunada still played young Hector and Emman, but there were two key replacements in the junior cast. Not to discredit Topper Fabregas and Tanya Manalang from last year, but Philip Palmos and Gab Pangilinan worked so much better in the roles of young Anthony and young Joy. Palmos looks like he can actually grow up to be Jon Santos, in both looks and demeanor. Pangilinan not only looked like a young Menchu Lauchengco, but she was able to project a more delicate vulnerability as she hits those very high notes. Pangilinan's sweet naivete as Young Joy won me over in Act 1 and her fate haunted me throughout the rest of the show and even afterwards. It was that strong of a performance  (The alternate cast featured original cast members Reb Atadero and Tanya Manalang, with newbies Nicco Manalo and Lance Reblando.)

The original cast recording CD was shockingly expensive at P700, but I decided to buy it anyway to closely hear (and re-hear) the fresh original musical rearrangements and mash-ups of the E-heads songs done by musical director Myke Salomon for this show. I played it in the car and sang along as much I could, all the way home.