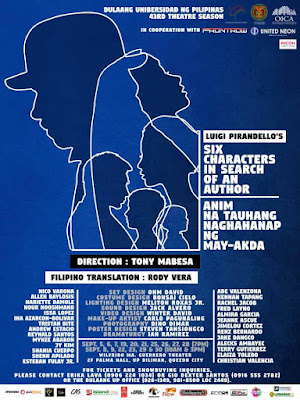 For its 43rd Theater Season, Dulaang UP embraces the theme of "Hudyat: Pagkilala, Pag-alaala, Pagpapahalaga." Their new artistic director, Ms. Banaue Miclat-Janssen, believes that this play by Luigi Pirandello addressed the first aspect of their theme, which was identity. "Six Characters in Search of an Author" was part of DUP's maiden season in 1976-77, directed by Tony Mabesa, who forty years later also directs this new production.

A director was preparing his cast to rehearse a play (also by Pirandello) on a theater stage. Suddenly six people came in from the aisles. An old man who was their leader introduced themselves to be characters of a story whose author had discontinued writing. They were a Father, a Mother, a Son, a Step-daughter, a Young Boy and a Little Girl.

They were looking for their author to complete their incomplete story. Fascinated by the characters' relationships with each other, the director agreed to stage their story as a play with his own actors. However, conflicts and arguments arose on the stage as disagreements kept coming up as to how to interpret each characters.

I had long heard about Luigi Pirandello and this play, his most famous work. so I was excited to finally see it being staged. It was very interesting to discover that it actually was a play within a play. As we are watching a play about characters staging a play, we get that occasionally rowdy, occasionally funny behind-the-scenes look backstage. We see stage hands preparing the props. We see the interaction between director and his hammy actors.

I caught a show rendered in the Filipino translation by Rody Vera. (Some performances would be in the English.) I caught a very young cast, most were currently Theater Arts students (either undergrads or Masterals) in UP Diliman. There were no prominent big-name guest actors in this production this time.

The two biggest central roles of this play are the Father and the Stepdaughter. These two characters get to display their most intense displays of emotion among the cast, having gone through harrowing experiences. They were the ones who felt the deepest passions about their characters and thus would not back down from arguing with the director about how they were being played.

In the show I caught, Father (or Ama) was played by Nico Varona. His delivery of the Father's lengthy lines was indignantly powerful as they dripped of his remorse.  (Allen Baylosis alternates in this role.) Stepdaughter (or Anak sa Labas) was played by Hariette Damole, who had been playing various lead roles in various plays this year. Damole was both sensual and bitter in her portrayal of a defiant character, the most challenging role of all. (Nour Hooshmand alternates in this role.)

The dolorous Mother (or Ina) was played by Almira Garcia, who was the understudy for the role for more familiar names Issa Manalo Lopez and Ina Azarcon-Bolivar, who alternate in this role. Mother basically sulked in silence at first, only to erupt in shame and misery in Act. 2. The Son (or Anak na Binata) was played by Tristan Bite as an uninterested, apathetic young man who would not like anything to do with completing their story at all. (Andrew Estacio alternates in this role.)

Uncomfortably silent, traumatized characters Young Boy (or Batang Lalaki) and Little Girl (Batang Babae) were played by an eerie Reynald Santos and a very petite JY Kim respectively. (Mykee Ababon and Shania Cuerpo are their respective alternates). On the other extreme, the bombastic, multilingual and colorful Madame Pace was played Shenn Apilado (Her alternate is a guy, Esteban Fulay Jr., whom I pretty sure could whip up an even more flamboyant portrayal.)

The Director (or Direktor "Boy Genius") was played by Ade Valenzona in a broadly comic balancing act,fascinated with the characters' strong egos, while still trying to hold on to his dignity and authority as director.  (Kennan Tapang alternates in this role.) Comic relief characters Leading Lady and Leading Man were played by Rachel Jacob and Fred Layno respectively, purposefully portraying these terribly hammy actors with their tongue-in-cheek. 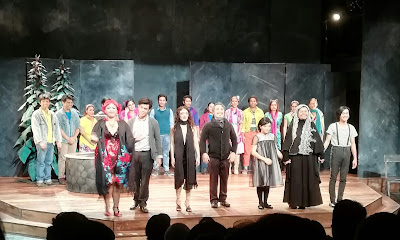 
This play is not immediately easy to get into because of its unusual plot and structure, but once you get into its groove, it will hook you into its intriguing premise. It was also not an instant hit when it was first performed in 1921, with audiences puzzled about its meaning. Nevertheless, since then up to now, and definitely with this Filipino translation, this Pirandello classic provides an interesting debate about the portrayal and perception of reality versus illusion on a stage that has captivated theater fans for nearly a century now.


"Six Characters in Search of an Author" runs from September 5 to 30, 2018 at the Wilfrido Ma. Guerrero Theater in Palma Hall, UP Diliman. There are English shows on Wednesdays, Fridays and Sundays, and Filipino shows on Thursdays and Saturdays. Showtimes are at 7 pm on Wednesdays to Fridays, with 10 am and 3 pm matinees on Saturdays and Sundays. Tickets are at P500 only. For ticket inquiries, call Kathleen Mack at number 09088654038.