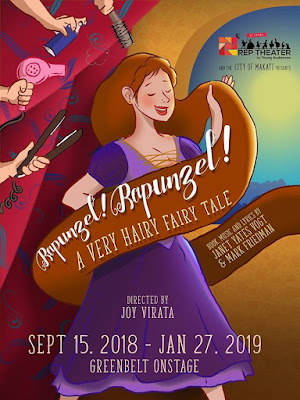 Rapunzel is one of the more popular fairy tales published by the Brothers Grimm in the early 19th century. The story about a long-haired girl trapped in a tower had origins from earlier centuries from various cultures. More recently she had been brought back into the consciousness of the younger generation by animated feature "Tangled" (2010), where Disney put its own spin to the fairy tale.

For their annual offering for kids this year, Repertory Philippines chose to produce a 2013 musical theater interpretation of the Rapunzel's story for children with book, music and lyrics by constant writing partners Janet Yates Vogt and Mark Friedman. This show is being directed by no less than the founder and artistic director of the Repertory Theater for Younger Audiences herself, Ms. Joy Virata. 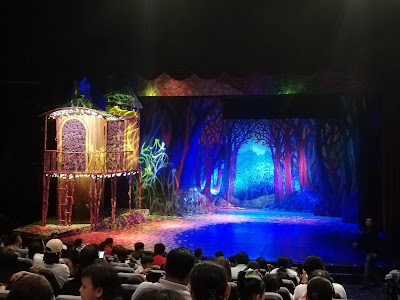 Rapunzel is a princess who had been locked away by her aunt Lady Zaza in a high tower located at the edge of a deep, dark, dismal forest since she was a child. A gallant knight Sir Roderick and his best friend, the flashy hair-stylist Edgar, embark on a quest to find and rescue Rapunzel before she turned 18 the next day. Will they succeed to restore her on the throne? Or will the evil Lady Zaza will achieve her ulterior motive to become queen?

In the show that I caught, Rapunzel was played by a teenager Alyssa Rosa, in her professional theater debut. Despite being only 18, her performance was sweet and confident in both areas of acting and singing. I believe further vocal training can make her higher range more solid. More stage experience can hone her comedy improvisation skills, prerequisites for actors who perform for children. (Cara Barredo, Mikkie Bradshaw-Volante, Justine Narciso and Ani Pearl Aquino alternate as Rapunzel.) 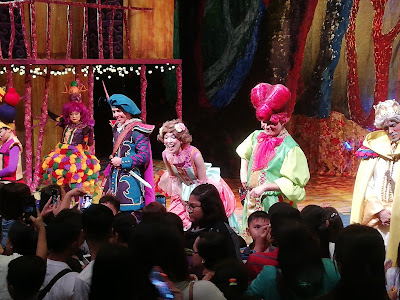 Everett, Borromeo, Rosa and Isidoro meet the kids after the show

Lady Zaza was played by the always fabulous Carla Guevara-Laforteza. The character had the big head of hair, a bombastic personality reminiscent of pop diva Lady Gaga as well as a beautiful magical jewel she wore as a pendant. Laforteza was a natural comedian and the kids loved her hilariously ruthless portrayal of the antagonist. In fact, she was the one who received the loudest cheers and applause from the kids during the curtain call. (Mikkie Bradshaw-Volante and Christine Flores alternate as Lady Zaza.)

Sir Roderick was played by Andres Borromeo, also in his first project with Rep. He gave the character an awkward dorkiness that the kids enjoyed. (Hans Eckstein and Jef Flores alternate as Roderick.) Edgar was played by Kenny Isidoro, only in his second Rep show after "Hair." He had the requisite flamboyance expected of someone who wore an elaborately coiffed red wig. (Steven Hotchkiss and Chino Veguillas alternate as Edgar.)

To keep watch over Rapunzel, Lady Zaza enchanted a dragon named Socrates by dousing his fire and cropping his wings. Arnel Carrion gave Socrates a friendly delightful demeanor, making him a most engaging narrator. (Jamie Wilson and Raymund Concepcion alternate as Socrates.) Lady Zaza gained her magical powers from a precious item she stole from a Gypsy Woman. This gypsy was played with quirky lovable-ness by Nathalie Everett. (Bituin Escalante and Cara Barredo alternate as the Gypsy Woman.) 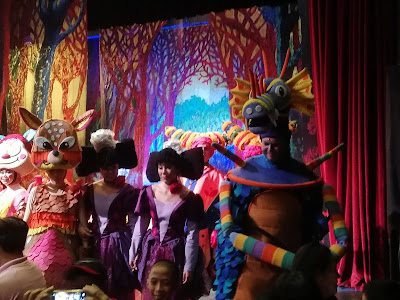 The highlight of the set (inspired by Henri Matisse) by Oliver Roxas-Green is Rapunzel's tower which had to be constructed in a way that actors could climb up it using her very thick and very very long blonde tresses. The sense of danger and mystery of the deep dark dismal forest was created by the lights by John Batalla. The fancy fantastic rainbow-colored costumes were designed by Raven Ong. His most remarkable piece was the very cute dragon costume worn by Socrates. The ballet spot numbers, purposely integrated into the story by Ms. Virata, was choreographed by PJ Rebullida.

The 25 years experience of Joy Virata in directing plays for children make her a beloved and respected local authority on the subject. Her actors did not only stay on stage, but had to go into the aisles among the kids in the audience to make them more excited and engaged in the story. There were several points when actors broke the fourth wall to ask help from the children about the predicaments their characters faced, which of course the kids were more than willing to do so. It was so much fun to see the children having fun.