Review of Rep's FATHER'S DAY: Softening Up the Scrooge When Sue Willows left her husband Henry for another man Terry several years back, she brought with her their three children. One day, their eldest son Matthew brought his 16 year-old goth girlfriend Christine home to pay his dad a surprise visit, one that his irascible old man did not exactly appreciate. When Sue found out where Matthew was, she drove over to pick him up. However, when her old car's engine broke down, Sue too was stuck in Henry's house for one topsy-turvy night.

With the bland generic title and unfamiliar playwright Eric Chappelle, at first I was not really too keen or excited to see this play. However, based on previous experience of watching them, I knew how Repertory Philippines can weave theatrical magic with even the most obscure British comedies, so of course, I still went to watch this. Well, what do you know, this one turned out to be one charming little gem, thanks in large part to the wonderful comic chemistry the Rep actors had on that stage. 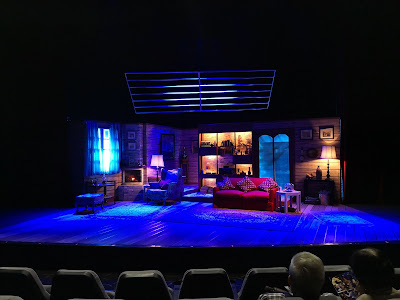 The Set by Miguel Faustmann

Miguel Faustmann can do these cantankerous old geezer roles blindfolded already. After all, he had been cast as Ebenezer Scrooge for countless times. Faustmann was some sort of a Scrooge again here, while the unexpected visits of his son and wife parallel those of Scrooge's ghost of Christmas Past. (Playwright Chappelle actually acknowledged this inspiration in one of Henry's lines.) In Act 1, Faustmann's Henry was as dry as a typical Brit can come, while in Act 2, he unexpectedly shifted gears to become naughty and amorous, something you won't see old Scrooge do.

Having Liesl Batucan perform the role of Sue was a brilliant casting decision. Previously, this type of role would have probably gone to Ms. Joy Virata, and Batucan is clearly her heir apparent when it comes to comedies. Even if the character was not exactly painted as a model wife in Act 1, Batucan can still make Sue so cute and endearing during her cheeky arguments with Henry. And when the play shifted to sex comedy mode in Act 2, Batucan rode the wave effortlessly, becoming all giddy and kittenish. Batucan's sense of comic timing and physical comedy was really a pure delight to watch.

I had seen Andres Borromeo's Rep debut last year when he played the Prince in the children's musical "Rapunzel, Rapunzel." He graduates to a main featured role in a straight play this time to play the Willow's eldest son Matthew. His facial features and line delivery sort of reminded me of former Rep actor Jaime Blanch. Anyhow, his Matthew was charming despite the fact that he was an out-of-school bum. It was not difficult to root for him as he tried to reconnect with his father in the most out-of-the-box way. Matthew was written with a lot of heart, and elder folks will think of their own children while watching him.

The role of the weird girlfriend Christine was played by Becca Coates in the show I caught. This role does not exactly give Coates the acting challenge that she faced when she played the title role in "Agnes of God" which won her a Gawad Buhay award for Best Featured Actress in a Play in 2018. Christine's character was one of physical appearance only -- with her thick Goth makeup, tattoos and multiple piercings, meant to shock the parents. She merely whispered to Matthew the whole play, until that one scene when we finally hear her voice, a deux-ex-machina scene of sorts. (Her sister Rachel Coates, whom I last saw in "A Doll's House, Part 2," alternates in this role.) 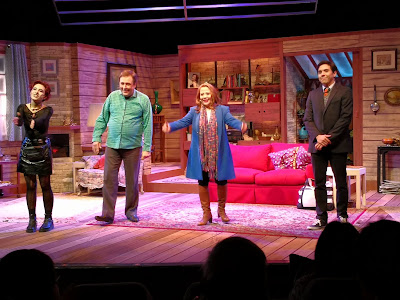 Rep co-founder Baby Barredo returns to the director's chair for this intimate little project. Aside from playing Sue, Liesl Batucan also takes on assistant director duties. The cozy living room of the Willow's home was designed by Henry himself, Miguel Faustmann. The technical crew is composed of the very hard-working John Batalla (for Lighting Design) and Arvy Dimaculangan (for Sound Design).