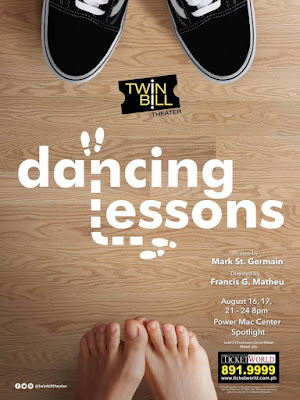 Twin Bill had been choosing to stage plays with dark, taboo or similarly sobering subject matter since they began as a theater production company in 2012.  "Dog Sees God" was about bullying and depression. "Suicide Incorporated" was about suicide. "My Name is Asher Lev" was about conflict between artistry and religion. "Wit" was about cancer. This new play of theirs, Mark St. Germain's "Dancing Lessons" may have lightened up a little but still tackled another serious topic -- autism.

Ever Montgomery was a college professor previously diagnosed to have Asperger's Syndrome, on the high-functioning end of the autism spectrum. Ever since childhood, he had suffered an irrational fear of being touched, even by his own mother.  Senga Quinn was a dancer on Broadway who was sidelined by a serious knee injury that necessitated her to wear a leg brace. When Ever was invited to attend an important dinner-dance party, he decided to seek Senga's help to teach him how to dance. 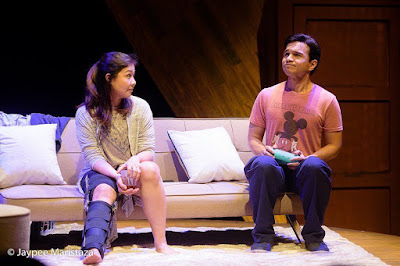 Pena and Villarama as Senga and Ever
(photo by Jaypee Maristaza, from Twin Bill FB Page)

This was a play about going outside your comfort zone and daring to face change. Ever Montgomery had been living his same humdrum day-to-day existence with zero social intimacy since his childhood. But now, forced to attend social gathering for which he could not be absent, Ever was faced with the daunting challenge of conquering his biggest fears, and since it involved social interaction, he knew he could not do it himself.

For this lead role, Randy Villarama went over beyond all those minor roles I had seen him in before to inhabit this specially demanding role. He kept in character the whole time, from his empty gaze which looked beyond Senga, to those repetitive nervous twitches in his hand, his constant fixing of his belt buckle, to his mile-a-minute enumerations of complex statistics. His initial lousy attempts to move to a Rihanna song were hilarious. His successful attempts to break through his constricting psychiatric shackles were uplifting.

For Senga, at first, teaching Ever to dance was just an easy way to earn a thousand dollars. She was brash and angry at the world, wallowing in her own self-pity because of her injury in one leg. She was an alcoholic and a junkie on pain meds. Later, their relationship evolved to things other than dancing. Senga essentially transitioned into becoming a therapist to draw Ever out of the fears that imprisoned him psychologically. In the same breath that she was healing him, she was being healed herself.

I had heard the name of Jill Pena in the ensemble of several plays I had watched before, but honestly this is the first time that I am solidly putting a face to her name. As Senga, Pena fluidly went through her character's arc with sensitivity and warmth, subtly breaking down the defenses she walled herself behind since her debilitation. She had to change first before Ever could change. It was her own change that led to Ever's change. Pena had us believing that her Senga could have such a significant effect on a man like Ever. 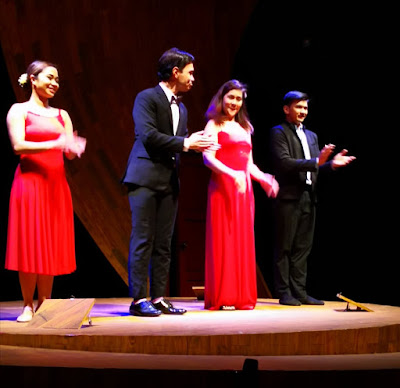 The set design of Kayla Teodoro was a single circular raised platform with a ramp that led to a solid door on the backdrop on which key points were being flashed. The all-wood set pieces with the lighting design of Joseph Matheu imparted a sense of warmth. The dancing of Marielle Joy Baylocon and Al Bernard Garcia, as choreographed by JM Cabling, reflected the exhilaration of Senga and Ever's spirits beyond their physical limitations. Kudos to Twin Bill co-founder and artistic director Francis Matheu for leading his team through this fulfilling emotional and psychological journey.


DANCING LESSONS runs for only 6 shows: August 16-17, then 21-24, 2019 with only one show a day at 8 am. Show runs for only 1-1/2 hours, with no intermission. Venue is at the Power Mac Center Spotlight, Level 2 Circuit Lane, Circuit Makati. Tickets prices at P1550 and P750. Parental advisory: certain scenes touch on sexuality.