Review of Trumpets' JOSEPH THE DREAMER: A Favorite's Fortune 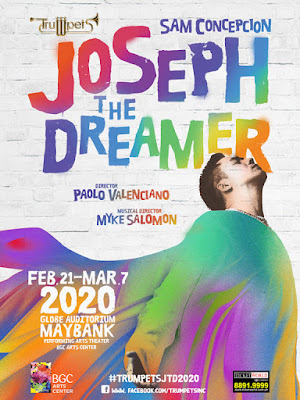 I had heard of a show called "Joseph the Dreamer" as the local version of the biblical story of Joseph, son of Jacob. This was an original musical born out of Filipino talent written by Freddie Santos in 1989, adapted from a cantata composed by Cam Floria. This was definitely not a retread of Andrew Lloyd Webber's "Joseph and the Amazing Technicolor Dreamcoat" (1968), though they may be telling the same story.

"Joseph the Dreamer" may hold the record as the longest running Philippine musical, but sadly I never had the chance to watch any of its runs. Audie Gemora played Joseph in the original run in 1989. 10 years later, pop star Gary Valenciano took on the role as the show reached its peak in 1999, with shows both in Manila and in the provinces.

This year, "Joseph the Dreamer" goes onstage again for the benefit of next generation, as well as for those of past generations who missed it, like me. Seemingly as a nod to its long history, Audie Gemora is back iin the cast, this time as Jacob. Gary's son Paolo Valenciano takes on the role of stage director for his debut production in theater.

We all know the story from the book of Genesis. Jacob had 12 sons from four wives. Among his boys, his favorite was his 11th son Joseph, the firstborn of his favorite wife Rachel. One day, Jacob gave Joseph a coat of many colors, which caused his brothers to rise up against him in jealousy. Treacherously sold into slavery, Joseph found himself in Egypt where was able to hone his talent for interpreting dreams. When he foretold the future based on the Pharoah's strange dreams, Joseph was named governor of Egypt.

Sam Concepcion is a very charismatic Joseph, brimming with confidence and goodness of spirit. His smile had a wattage can brighten up the whole stage. On top of his star power, this exhausting role required the actor to be a triple threat of considerable stamina, as he had to sing, dance and act in practically all the scenes.  Admirably, Concepcion proved to be more than adequate for the demands of his challenging role. He even nailed a high-flying spin jump kick at one point.

For the dancing this show, I can actually feel the spirit of Michael Jackson / Gary Valenciano in the hip hop moves by choreographer MJ Arda. There is so much joy onstage when the cast members were dancing, especially when rocking those characteristic "Walk Like an Egyptian" style steps. The absolute best dance number for me came at the very end when adorable little cutie Eli Luis led the entire cast of Hebrews and Egyptians to dance the finale "Praise His Name" -- a truly effusive Hallelujah moment indeed.

I did not automatically recognize Audie Gemora as Jacob, as his usual look was totally transformed with the long dreadlocks, beard and body heft. Gemora's Jacob was played mostly as a comic figure, but he still had that air of authority around him. Bituin Escalante only had one song number as Joseph's mother Rachel, but wow, did she stop the show dead in its tracks right there with her sheer vocal virtuosity (and her featured song "He Opens a Window" happened early in Act 2!). The narrator of the story (and Egyptian princess Asenath) was Kayla Rivera, who exuded an energetic stage presence in this role, sometimes lacking from her previous roles.

Of course there are a lot of dramatic moments throughout the show. The climactic reunion scene among the brothers was downright tear-jerking in its pure sincerity. However, despite these sad scenes, there were several comical moments which had the audience in stitches. The best comedy was at the expense of the flamboyant Pharoah. His elaborate costumes alone with the glassy cape in one scene, and glittering gold lame cape in the next can make you giggle the way the lavish costumes looked on actor Carlo Orosa, who seemed to be improvising his outrageous gestures the whole time.

The other attention-getting scene was the one about Potiphar's wife, which had undertones of a scandal. The decision to execute this sensitive scene as a campy comedy was a very wise one, anchored on the comedic timing of Alys Serdenia in her performance of the naughty song "Mae East". Her slinky red costume was topped by an outrageously huge, triangular flat-op afro wig, which added to the hilarious nature of the scene. 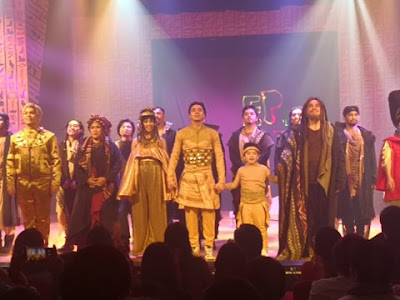 To distinguish scenes of dreams from reality, director Valenciano employed effects such as black lights with neon color ribbons, flashing strobe lights and glittery laser lights (designed by Dong Calingacion). The centerpiece of the set designed by Mio Infante was a movable triangular stage where Joseph frequently performed. Infante was also responsible for all those fabulously atypical anachronistic costumes, especially those ornate Egyptian designs. (My minor costume disappointment was about the "coat of many colors" itself, because the colors were at the back and inside the coat, so when Joseph was facing the audience, all we see is a plain black coat.)

Since this is the very first time I had seen this show, I would not know how much different this current show to the original. I can clearly see its appeal to audiences of all ages. In true Trumpets style, Biblical lessons were imparted without sounding preachy. The way it was staged this time by the young director Valenciano (along with his similarly young co-director Nelsito Gomez) was well-paced, engaging and entertaining. The musical score is very catchy and energetic as produced this time by musical director Myke Salomon. It can therefore easily lend itself to evolving styles of dance choreography in its various incarnations over the years, and yes, the years to come.


JOSEPH THE DREAMER runs at the Globe Auditorium of the Maybank Performance Arts Theater in Bonifacio Global City from February 21 to March 7, 2020. As of now, there are five show times left on the Ticketworld site: 8 pm on Feb. 28 and 29, and 3 pm on Feb. 29, March 1 and 7. Tickets are sold at P2,500 for VIP, P1,500 for Gold, and P1,000 for Silver. Currently, there are limited seats left for all remaining show dates.