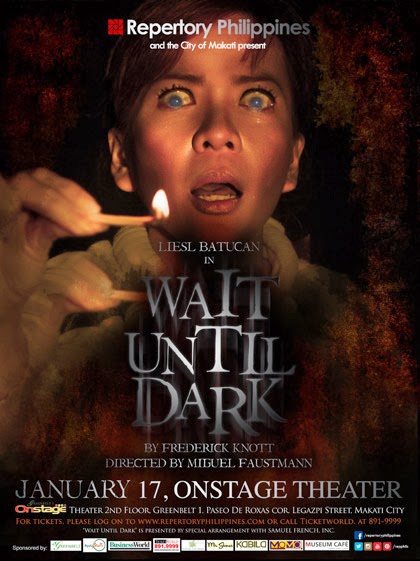 Just three weeks into January and the local theater scene is already coming to life!

Repertory Philippines' initial offering for its 77th season is something out of the ordinary -- a straight play that is a suspense-thriller.  Now how many of those have you seen before?  I think this would be the first one I have seen.  I was very excited to watch it because of its novelty, and my curiosity on how to pull off suspense on stage.

The play was written by Frederick Knott and was first staged in 1966 on Broadway with Lee Remick as Susy.  Knott's main theatrical output were thriller plays like "Dial M for Murder," "Write Me a Murder" and this one "Wait Until Dark."  Repertroy Philippines had staged "Wait Until Dark" back in Season 8 in 1973 with Celia Diaz-Laurel as Susy.  It is certainly ripe for a re-staging for the new generation. 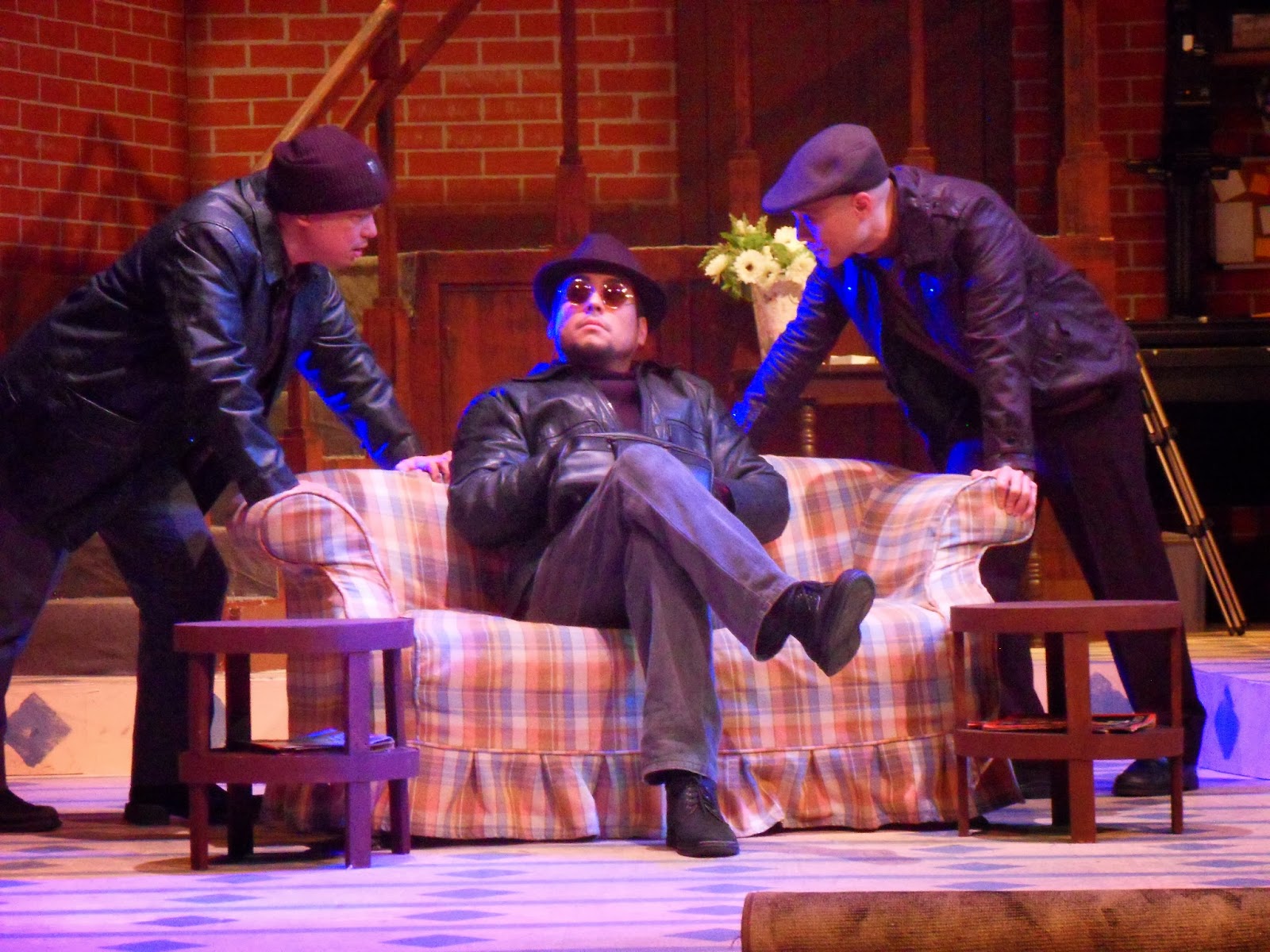 I have vague memories of watching the 1967 movie version of "Wait Until Dark" on Betamax I believe, way way back.  I do not really remember the story at all anymore.  I just remember those mesmerizing big eyes of Ms. Audrey Hepburn and the distinct lilt in her voice as she delivered her lines, especially the imploring way she pronounced the word "please".  It would be a formidable task for the actress who will play her role onstage to create her own Susy.

The setting is London, in the mid-1960s.  Susy Henderson is a young woman who had recently lost her eyesight in an accident.  She lives with her photographer husband Sam. Sam had been asked by a mysterious woman to bring a doll over from the Netherlands. Unknowing to the Hendersons, the doll contains a valuable stash which a trio of con men, led by a ruthless drug lord Harry Roat, is trying to get their hands on. When Sam was away on a trip, they try to convince Susy that her husband murdered the woman who gave the doll to him, and it was necessary to find the doll to save Sam.  This handicapped housewife whom they thought would be a cinch to trick and scare in their elaborate scheme turned out to be smarter and more gutsy than they imagined her to me. 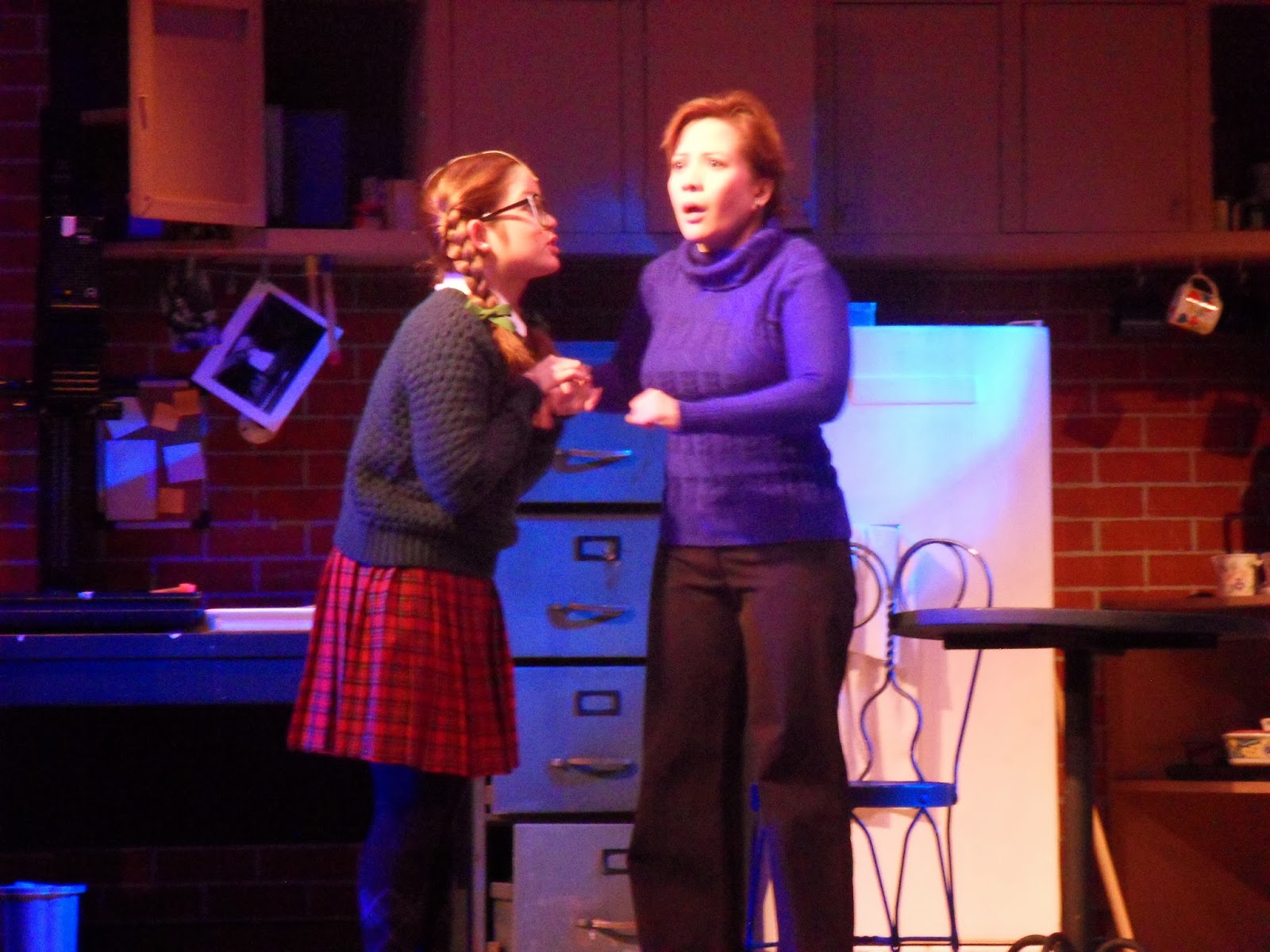 For being so convincing as the blind Susy, Ms. Liesl Batucan certainly exceeded all expectations with her bravura performance of a most difficult role.  All those little mannerisms we expect from blind people -- the constant stare in her expressive eyes, the feeling of the floor with her feet -- all done as if they were second nature already.  From the moment she entered the set, you already feel the tension. She excelled not only in the suspense scenes, the success of which hung on her performance as much as the lighting effects, but also shone with her ebullient heart in those quiet and tender scenes.  Even if this is still January, as early as now, I have a feeling Ms. Batucan will be in all the Best Actress lists by year end.

Arnel Carrion plays the evil criminal Roat.  I have to give him props that he only learned this major villain role in six days after the original actor Jamie Wilson literally broke his leg (knee actually) during rehearsals last Thursday and required surgery.  His long lines were perfectly delivered, no flubs.  With his thick eyebrows, brawny physique and piercing glare, Arnel looked positively sinister in the last scenes.  He promises to continually develop his character and improve on it during the course of the run. 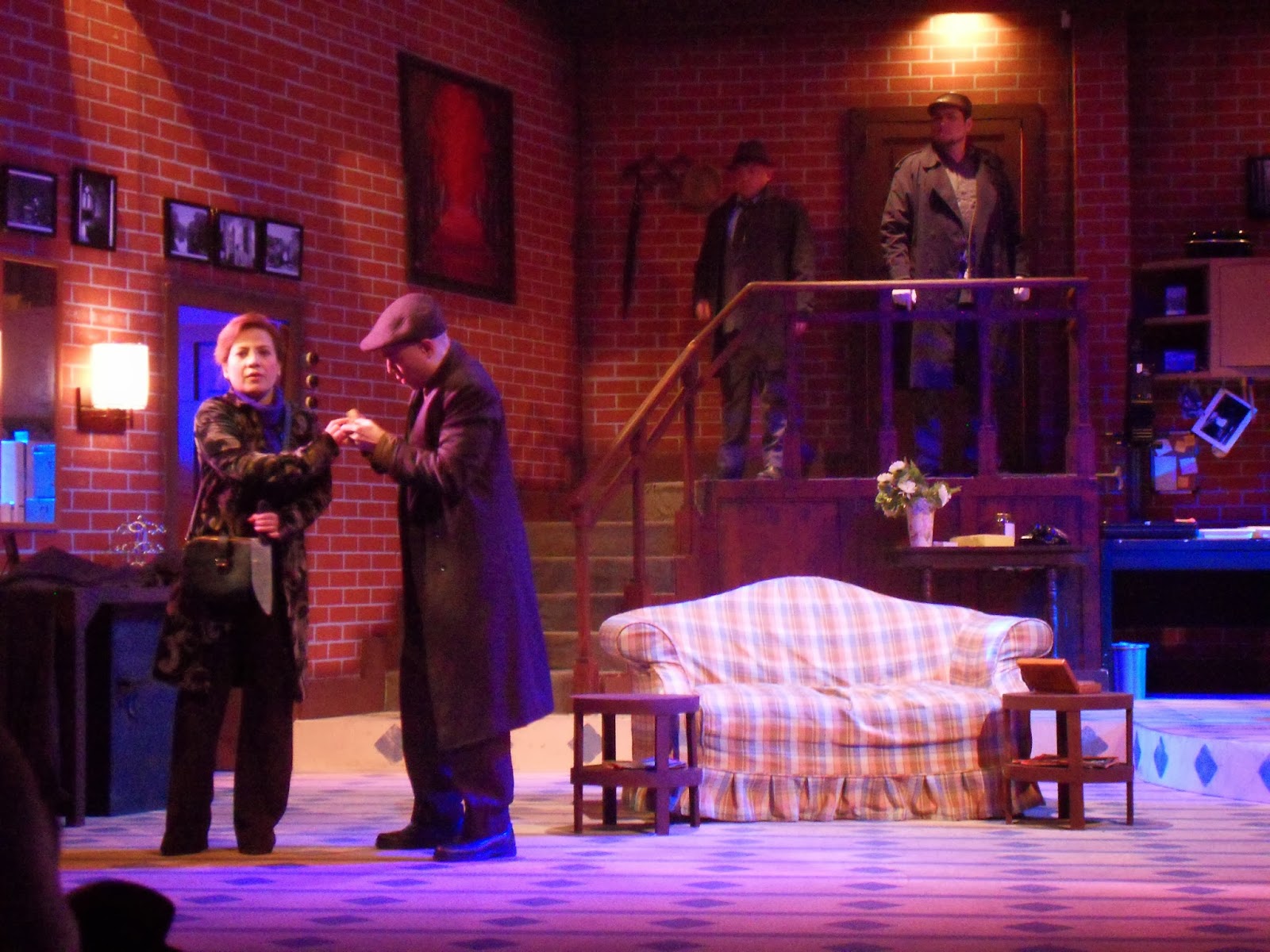 Joel Trinidad in the post-performance press conference said this was his most difficult role ever, only getting the proper character just two days ago.  I would have been fooled because he totally captured character of Mike Trenton, the petty criminal with a kind heart.  Mike's role in the con was to pretend to be Sam's friend and earn Susy's trust.  He did just that and then some, lending the play some touching moments.

Robbie Guevara provided the humor in this production with his simpleton thinking and obsession to wiping off his fingerprints as Trenton's partner-in-crime Croker.  This play marks Robbie's return to the Rep stage after many years. Young Daniella Gana plays the Henderson's upstairs neighbor Gloria with spunk.  Now we know her successful stint as Alice (in Wonderland last year was no fluke).  Lorenz Martinez got the role of the husband Sam also only six days ago after the original actor Arnel Carrion was upgraded to play Roat. The role is small and was a walk in the park for him.

Despite being set in the 1960s, the play did not feel dated at all.  The whole play was set in that neat underground flat of the Henderson's designed by director Miguel Faustmann himself. The critical elements of lights (especially in the last scenes supposedly happening in total darkness) was very well done by John Batalla.  The eerie sound effects of Jethro Joaquin completes the necessary atmosphere for excitement. 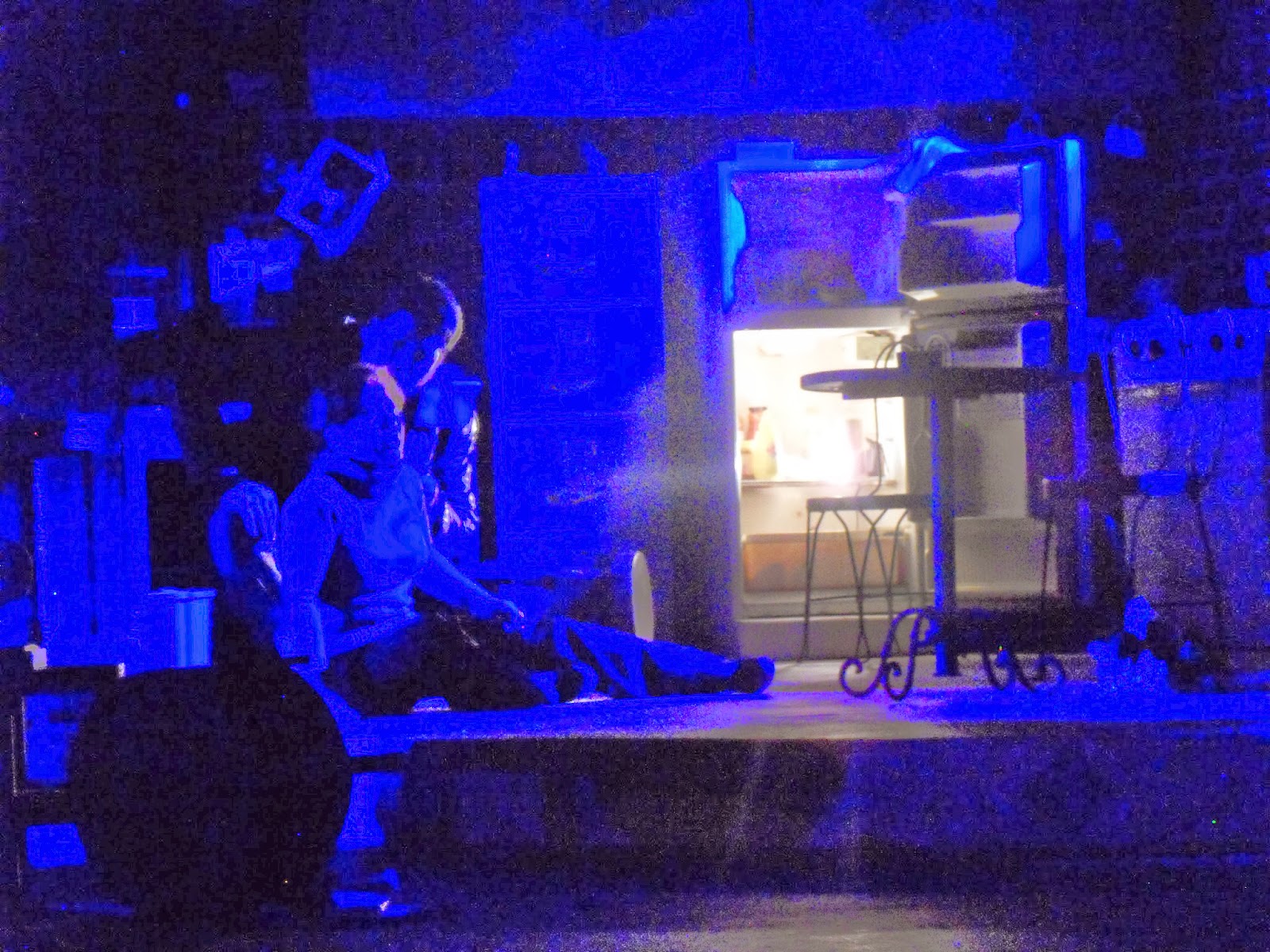 Congratulations to the Repertory Philippines crew for this rare, effectively suspenseful stage production. Jamie Wilson's unfortunate accident just a week before opening night was big hurdle to jump over, but troopers as they are, the show went on as scheduled with nary a hitch.  Even the souvenir programs had already been edited accordingly to reflect the new cast.  I am very impressed.

"Wait Until Dark" will run at the Onstage Theater at the second floor of Greenbelt One, from January 17 to February 9, 2014.  Take a break from musicals and comedies for a while.  Do catch "Wait Until Dark" for a different kind of theater experience!  For tickets call Ticketworld at 891-9999 or log on to www.repertoryphilippines.com.