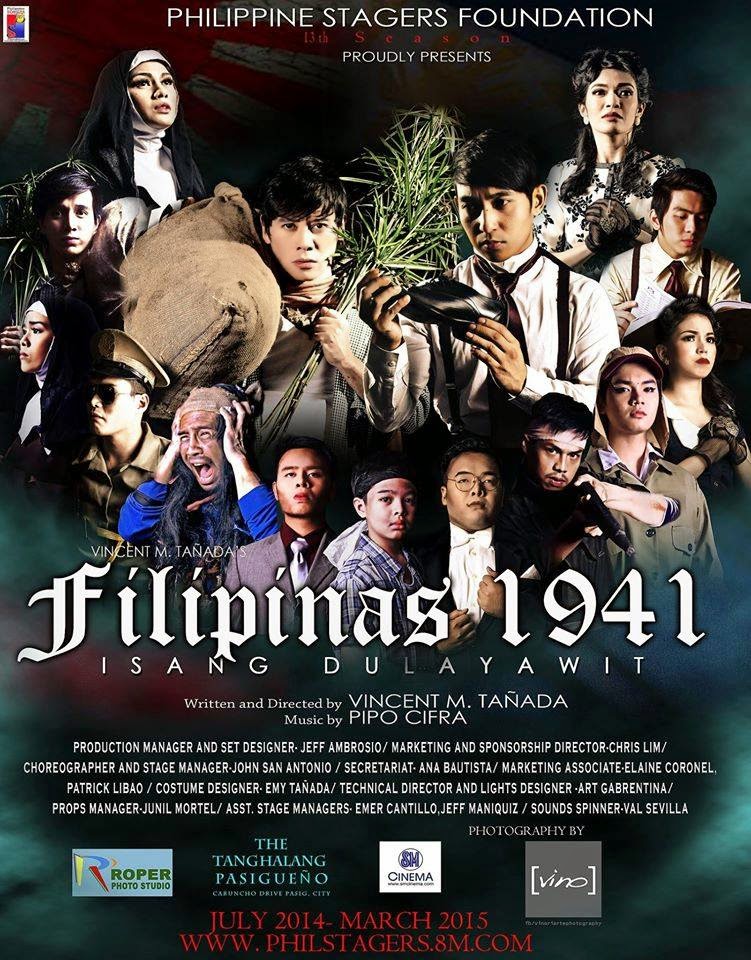 The Philippine Stagers Foundation continues its yearly tradition of creating an original Filipino musical play about a person or time in Philippine History. They have had previous plays about heroes like Jose Rizal, Andres Bonifacio, Ninoy and Cory Aquino. They had had productions about St. Lorenzo Ruiz and St. Pedro Calungsod as well. This new play this year has its setting in the Japanese Occupation, a painful and bloody time in relatively recent history that is rarely tackled in a musical.

"Filipinas 1941" is about two brothers, Felipe and Nestor, who were diametric opposites in their personality. Felipe is simple-minded school dropout with lowly ambitions. Nestor has a brilliant mind, graduating valedictorian of their class with big dreams. The two brothers got separated when Japan occupied the Philippines during World War 2.

Felipe's path led him to be a poor farmer, getting separated from his sweetheart Sophia (who just entered the nunnery when they parted) and becoming a member of the guerilla movement. On the other hand, Nestor married his girl Emilia and became a rich businessman in the shoe business, even supplying the footwear of the Japanese army. Will these two brothers ever get back together again as the war raged on? 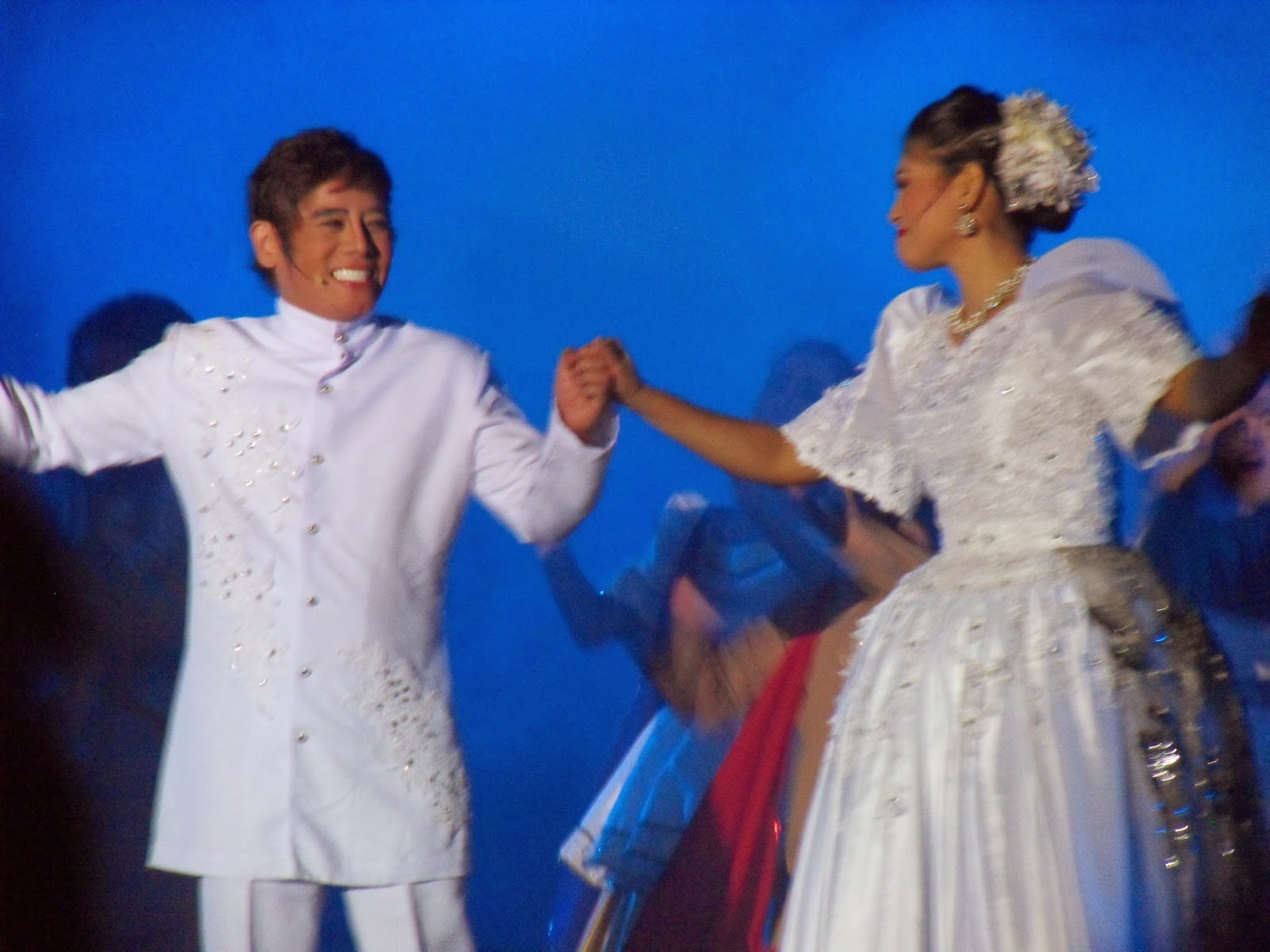 Atty. Vince Tanada, who also wrote and directed this show as well as all other Stagers shows, played the elder brother Felipe in his usual flamboyant style. It is a style which others may call overly theatrical, but evidently his legions of fans love him for it. His tenor singing voice is stronger here ever than how I remember it before. He reaches some pretty crazy high notes (as written by renowned Musical Director Pipo Cifra) solidly. This is very impressive vocal conditioning considering they stage this demanding show four times a day!

As writer, Tanada came up with an inventive narrative that was able to mix its love story with known personalities and elements about the Japanese occupation. The basic story of star-crossed lovers will turn out to be more cleverly plotted than you would think at first. For me, the best directed scene was for the beautiful 4-voice ballad "Wala Ka Man". Here the four leads sing about missing each others' love, and Tanada's inspired stage interpretation was surprisingly heartfelt and poignant. For our history lesson, we get to meet and understand the personality behind famous historical names like Manuel L. Quezon, Jose P. Laurel, Gen. Masaharu Homma and Gen. Douglas MacArthur. We see and hear more about comfort women, Mickey Mouse money, the Death March, and the Huks. 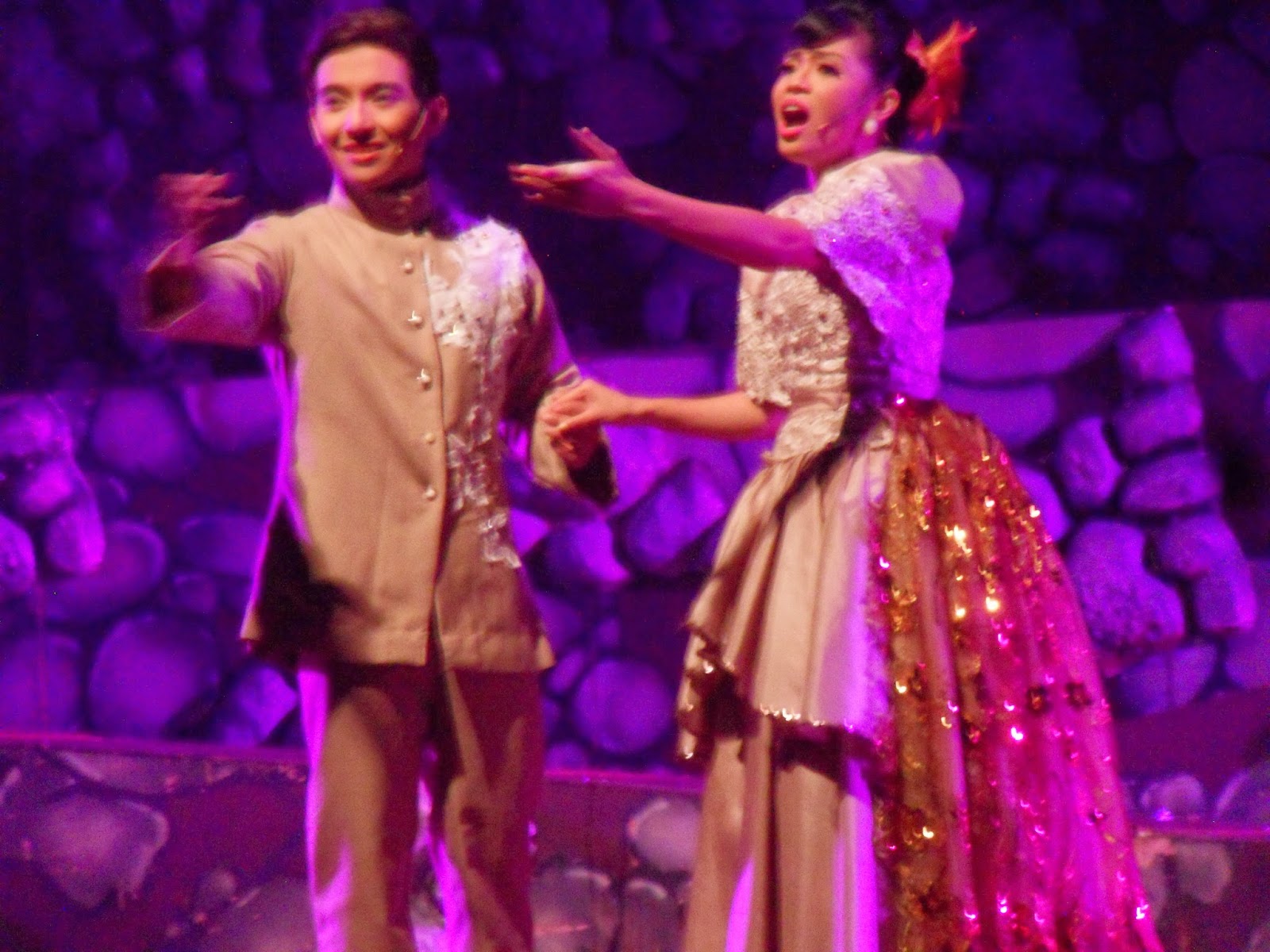 Patrick Libao and Cindy Liper joins Tanada as Stagers tried and true power triumvirate, also playing lead in their last two musicals that I have seen. Since I saw him first in "Joe", Libao (as Nestor) is constantly improving in confidence, acting-wise and singing-wise. Liper (as Emilia) is simply awesome as an actress and singer, I have to say she is the best total performer on the stage there last night. Adelle Ibarrientos was also in the last two musicals, but in a smaller roles. This time she becomes part of the lead quartet of this play and deservedly so, as Sophia.

Among the secondary roles, Chris Lim stood out delightfully playing Gen. MacArthur with a tongue-in-cheek drawl. JP Lopez was moving as the misunderstood puppet president Jose P. Laurel, whose intentions we barely knew anything about till now. Young Gabby Bautista had a lot of stage presence as Pancho, the boy left in the care of Felipe when his grandfather Tata Edong (Chin Ortega) disappears. Poul Garcia played the sadistic Japanese officer Tsuji Masanobu with evil glee. 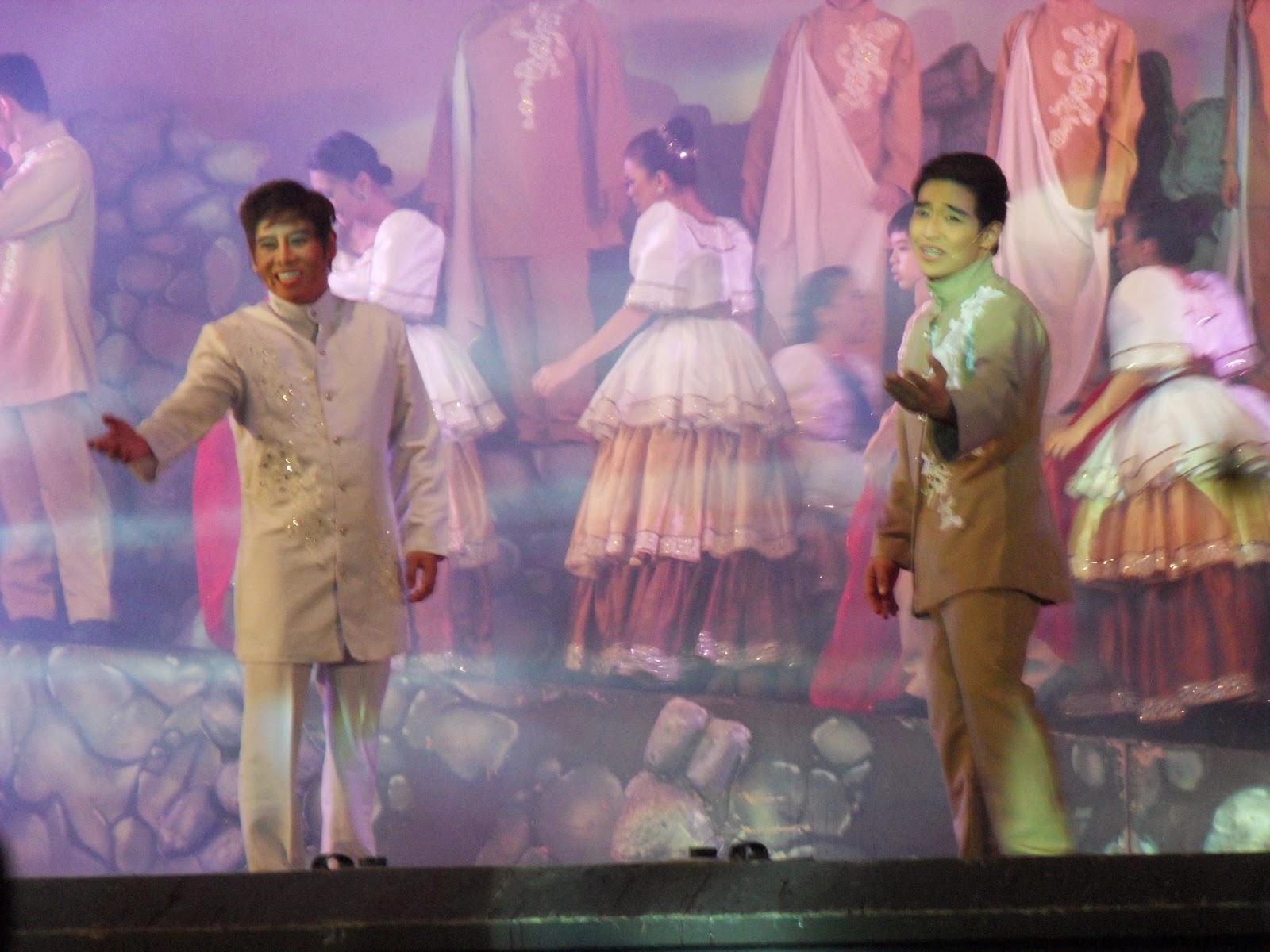 Tanada and Libao as Felipe and Nestor

When you've see a Stagers play before, you get used to its energetic and youth-oriented style. Every song is a big production number with cast members all over the stage, singing and dancing in unison. All the sung dialog has an accompanying choreography with some crazy arm gestures done by all. There is a portion when they would crack some shallow jokes for quick comic relief. The finale would be a major flag-waving nationalistic statement. This style is a signature that is unique for a Stagers' play and should not be taken against them. It would not be a Stagers play without these trademarks.

Overall, "Filipinas 1941" may not be as complex as "Joe" or "Bonifacio" before it. However, it was nevertheless able to fulfill its aims to entertain and to educate its young audiences. For some, the choreography of the song numbers may come across as crude and the attempts at comedy may come across as corny. But hey, the young audience lapped it all up and were enjoying the show heartily. As a writer-director, Vince Tanada truly knows the pulse of his target demographic. He eschews high-brow sophistication in favor of a more down-to-earth popular style, in order to effectively get his patriotic message across, and to get more youth more interested in the theater.

"Filipinas 1941" is being shown in SM North EDSA Cinema 9 and other venues all over Metro Manila and key cities all over the country since July 2014, and will run up to March 2015. These shows can fill up the whole theater, mostly with students from an entire school. For schedule of performances. check out the Phil. Stagers website, Facebook and Twitter accounts.