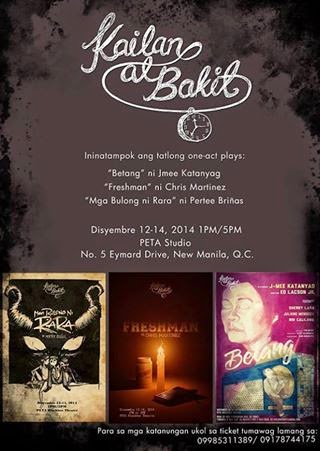 "Kailan at Bakit" is a set of three one-act original Filipino plays held at the Studio Theater on the 3rd floor of the PETA Center. (I never knew they had a small intimate theater venue up there before.). This show is the first production of Dalanghita Productions. One of the producers, Pertee Brinas, gave a very short introduction about their company which aims to produce all original local plays or musicals. This one weekend run of "Kailan at Bakit" is just a soft opening of sorts for this fledgling company. The big one comes in summer next year with the musical "Kung Paano Ako Naging Leading Lady." 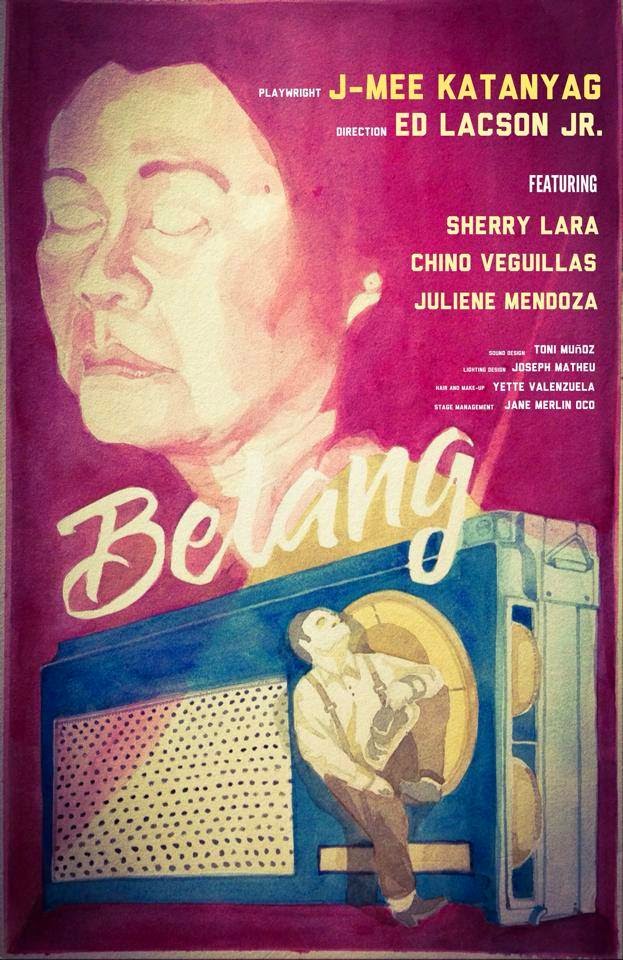 I had already seen this one-act play last July during the Virgin Labfest at the CCP. Here was how I reviewed the play back then:

"The situation in this play is so deceptively simple that the synopsis can be summarized in a single sentence: Octogenarian Lola Betang waits for her former lover boy to fetch her with him in the next life. However, the multi-layered performance of Ms. Sherry Lara as the title character Betang was able to show us so much more than that.  If there was a best actress for the festival, she would probably be one of the top contenders. The audience audibly responded to her, even when she was just batting her eyelashes or smiling coyly. 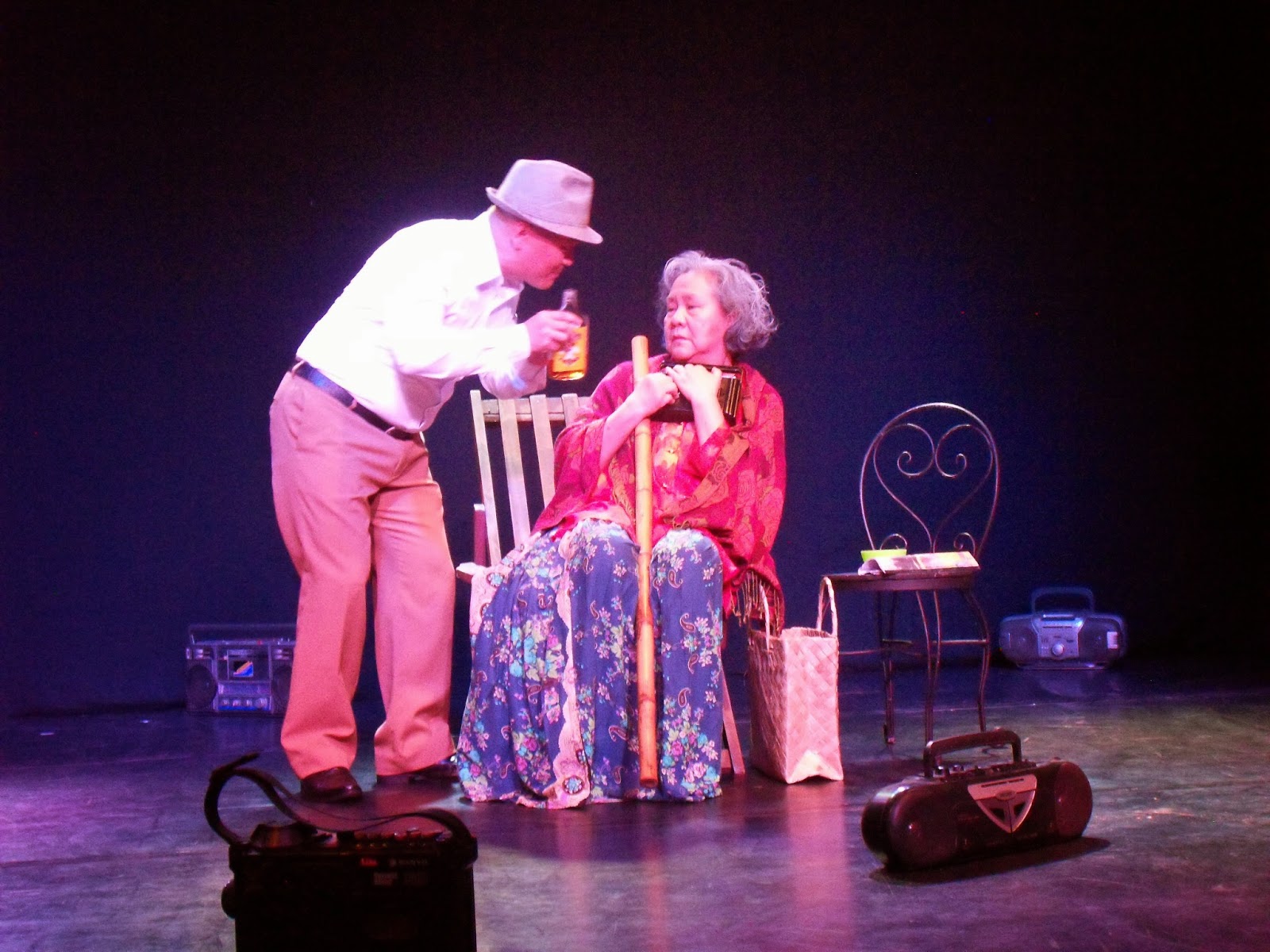 There was intense chemistry felt between Ms. Lara and the actor who played her long-awaited "sundo" (or, in Philippine superstition, a fetcher to the afterlife), Chino Veguillas. Veguillas possessed a palpable charisma that made many females in the audience swoon with Betang.  That theme song of theirs, "I Wanna Be Loved By You" by Marilyn Monroe, was so hauntingly perfect.  When they delivered those killer lines at the end, you'd have to be made of stone if you were not emotionally moved. Beautiful."

The luminous Ms. Sherry Lara reprises her role here as Betang. In the Virgin Labfest, Juliene Mendoza only played the minor third character, Betang's nephew Norberto. In this new staging, Mendoza takes on the main character of Betang's ghostly "sundo". Mendoza has always been a reliable actor and this time is no different. However, I do not know if it is because I had already seen this play before, but the romantic chemistry between Lara and Mendoza did not affect me as much as it did back in July. Maybe it was because I was already aware of how perfectly it had been portrayed the first time around. 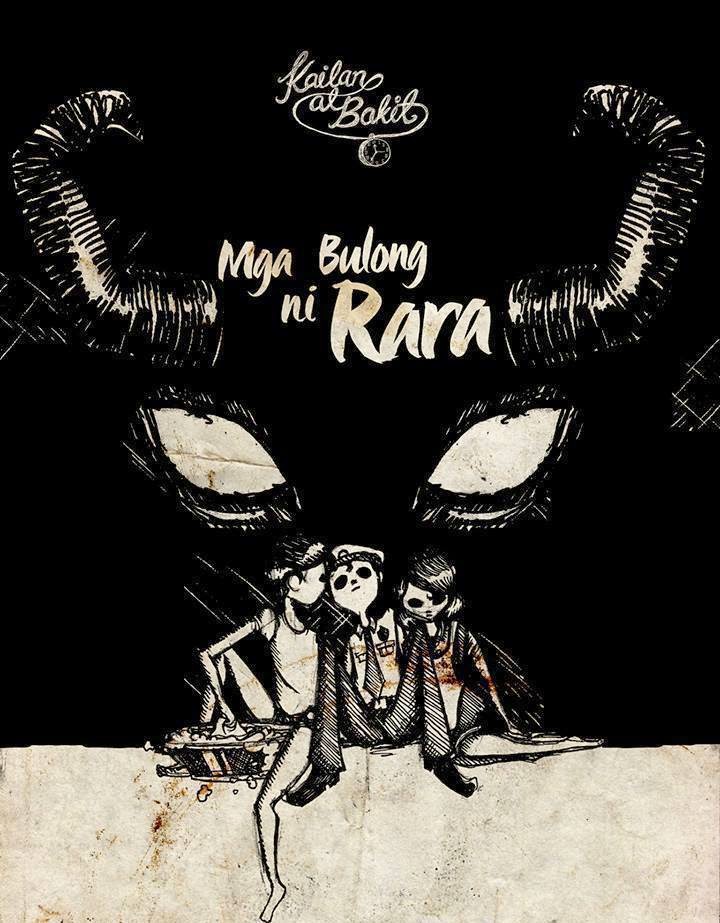 This play is set in a house inside a subdivision. Houseboy Nitoy is washing clothes and doing all the household chores because housegirl Gemma is in her first month of pregnancy. Her condition was the result of a one-night stand with hunky security guard Yuri, whom Nitoy also fancied. Their love triangle reaches a head when something disturbing happens to Yuri which had diabolical consequences.

The script throws us a weird curveball. From a funny love triangle story, it went to a totally unexpected direction that was not funny. Instead, it went from something light to something totally dark. This shift was so radical and sudden, with no clear explanations given. By the way, I also did not really get who the titular Rara is. 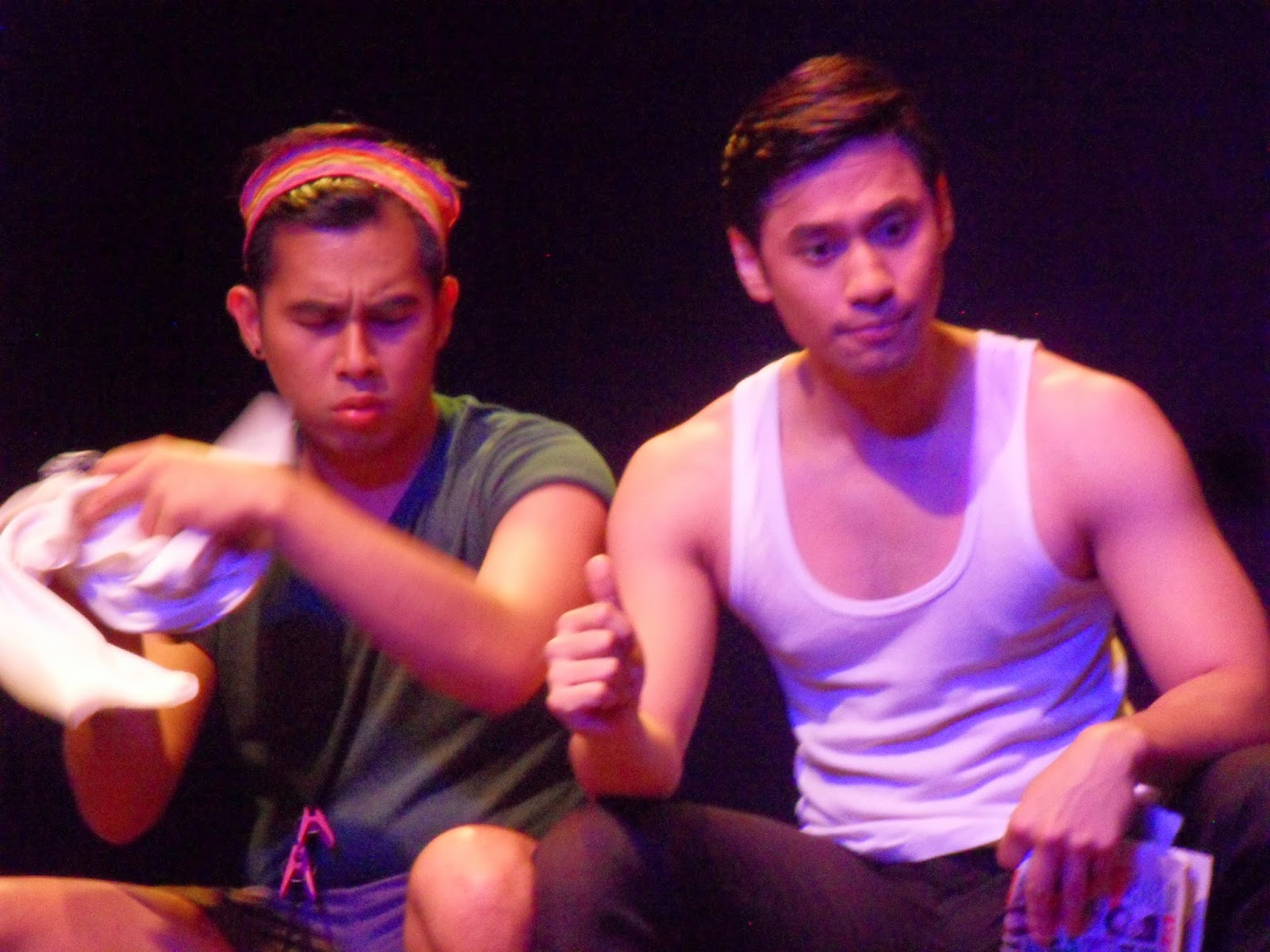 The three new actors all did well in their roles nevertheless. Flamboyantly helpful Nitoy was played by EJ Patacsil. The clueless guard Yuri was played by TJ de la Paz. The two of them have good playful chemistry together. The annoying Gemma was played by Ina Azarcon.  I am sure we have all met employees like her in real life. These three realistic characters as charmingly portrayed by these actors really made the supernatural twist come out of totally nowhere. I think the same initial premise of the play could be reused for a totally different and more interesting rom-com type of play, or even a musical. 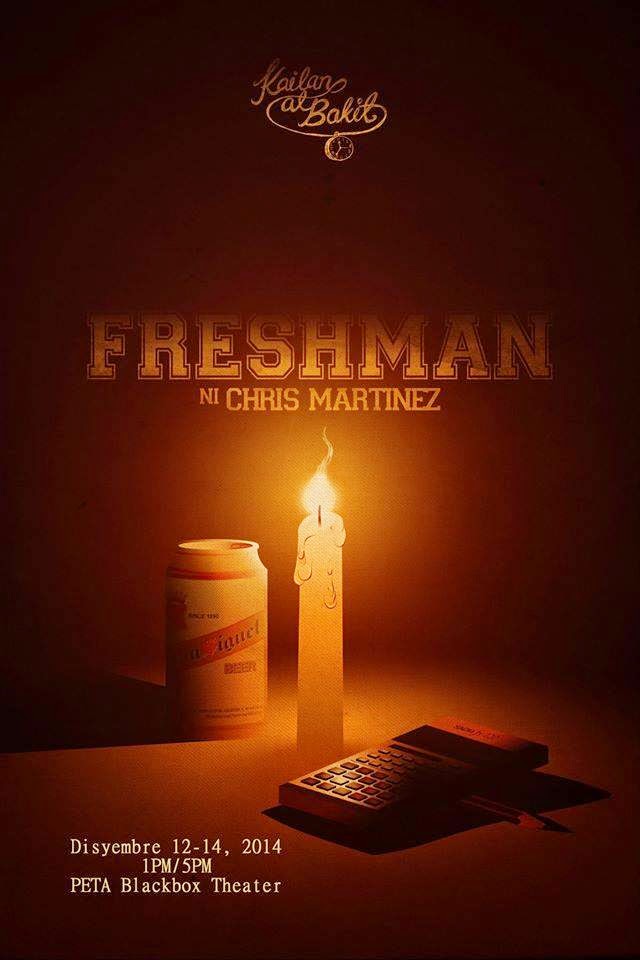 Bonn is struggling to study for their Statistics finals the next day. He asks his classmate Ryan to his house to help him in his review. In the course of this study session, their conversations turn from small talk about school to unsettling discussions about the most bizarre of subject matters.

I had the most expectations for this play because Chris Martinez is well-known for his well-written, very funny films like "Here Comes the Bride" and "Kimmy Dora". There was nothing light or breezy or funny about "Freshman". The whole play is strange, and very uncomfortable to watch. (I did like that reference to a certain "review center", brought back memories of my own college days in Diliman.) 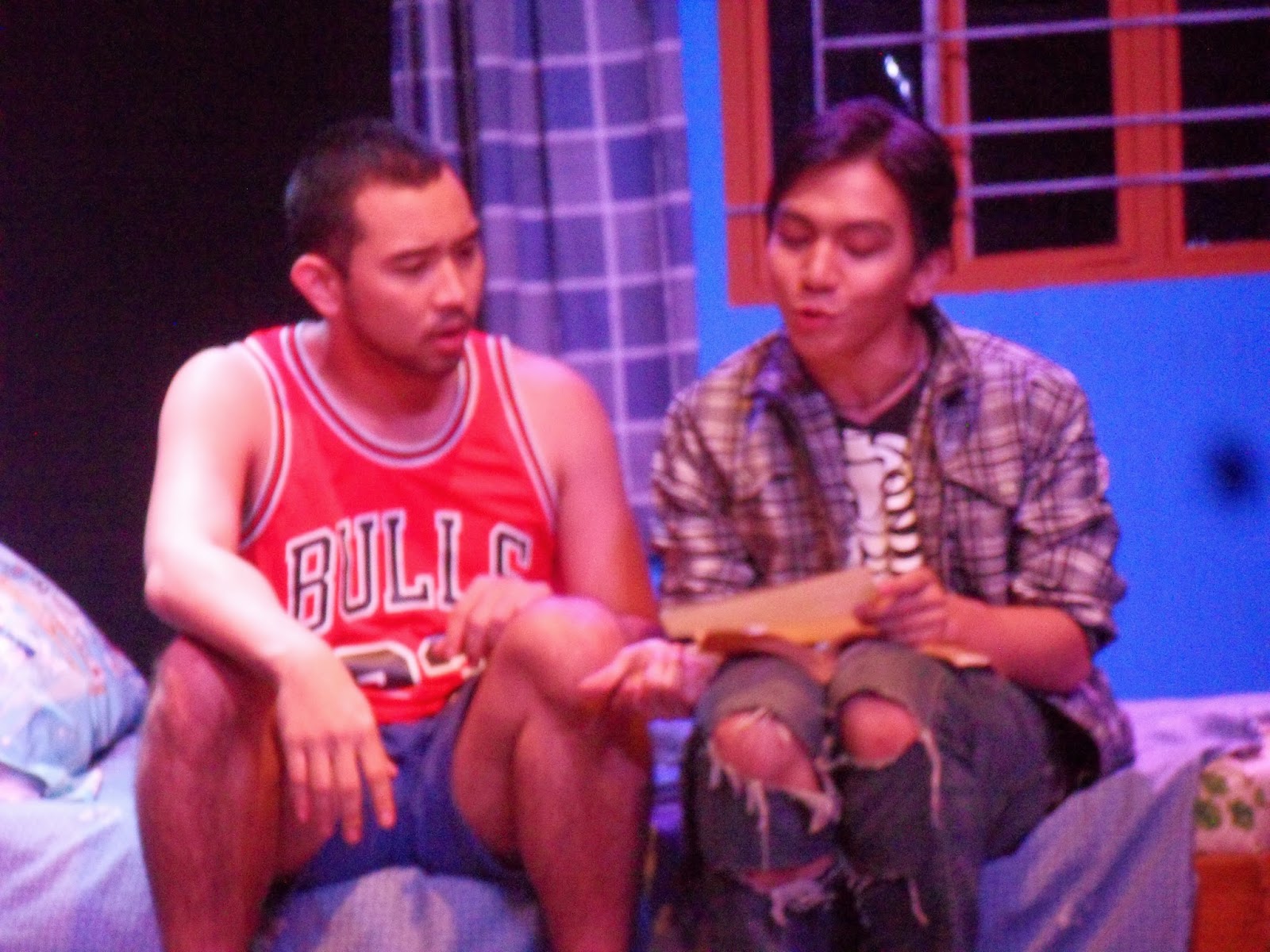 Ryan is a manipulative weirdo genius with repressed desires and violent tendencies. I guess there are really crazy people like that in college. Gio Gahol got all his character's idiosyncrasies down -- from the way he eats his potato chips, to his calculator rituals, to the secret of his "ballpen". He was totally committed to his role, did not fall out of character, no missed beat.

It was Bonn though that was unrealistically written, as portrayed here by Brian Sy. Is desperation to pass a subject enough reason to bear such indignities as this character was made to endure? In the first place, why does he not have his own calculator? The two of them can't be sharing this quirky calculator during the exam, can they? Two sick violent events happen to him that night, and both times, this supposedly macho jock just gets up to resume his review. I would have told that guy to get the hell out of my house after the first one. Of course, maybe I just did not get it.

"Kailan at Bakit" will run only for this weekend, December 12-14, 2014 at the PETA Studio, 3/F PETA Theater Center in Quezon City. There will be two shows on Saturday and Sunday, 1 pm and 5 pm. The 5 pm show is perfect appetizer for those who are watching "Rak of Aegis" in the main theater at night. The 5 pm show ends about 7:30 pm, just as Rak will begin at 8 pm. Each ticket costs P 600 inclusive all three plays already. For ticket reservations, contact number is 09985311389.