Review of GTF's KANSER @ 35: THE MUSICAL: Putting a Long-Running Play into Song 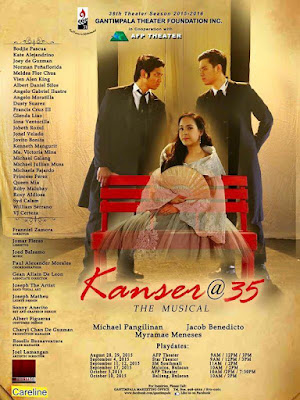 "Noli Me Tangere" is probably the most well-known novel written by a Filipino author in the Philippines. Every Filipino who went through local high schools should know the story and all the characters of this book written by our National Hero, Dr. Jose Rizal.

One of the many plays based on "Noli Me Tangere" is KANSER of Gantimpala Theater Foundation Inc. It is hailed to be the longest running play in Philippine theater history. To mark its 35th year in existence, “KANSER@35” will be presented for the first time as a full length musical theater production. The libretto was written by Jomar Fleras. The music was by Jed Balsamo, while choreography was by Paul Alexander Morales. This show is under the direction of Franniel Zamora.

I think making it a musical is a brilliant idea, as songs should make the show more appealing to more audiences. The casting of pop singers and reality TV stars in the lead role of Ibarra is also a smart move to attract the youth to watch. 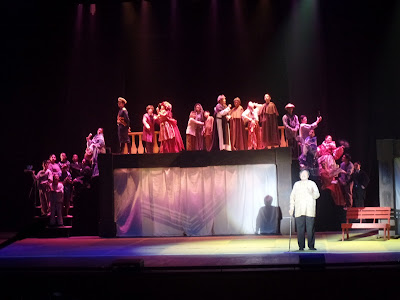 Of course, we all know the story of Crisostomo Ibarra and how he came home from Europe to find his father's grave desecrated by the friar Padre Damaso. Continual verbal taunts, an attempt on his life and false accusations eventually push the intellectual Ibarra to take up arms. Meanwhile, Ibarra's lady love Maria Clara learns about who her real father is from her mother's letters, given to her by the slimy Padre Salvi. In shame, she bid goodbye to Ibarra and enters the convent instead.

The best performer in the entire ensemble is Myramae Meneses as Maria Clara. She is totally at home with this role, maybe because she also played Maria Clara before. In fact this is already the THIRD time I have seen Ms. Meneses play the saintly heroine. I saw her as MC the first time in "Noli Me Tangere the Opera" in UP Diliman. I saw her again when that show was brought to Newport Performing Arts Center in Resorts World Manila. In any case, Ms. Meneses was in excellent soprano voice and was never lazy in her performance. You can really see her passion in those emotional songs in the homestretch, peaking during that haunting scene in the nunnery. 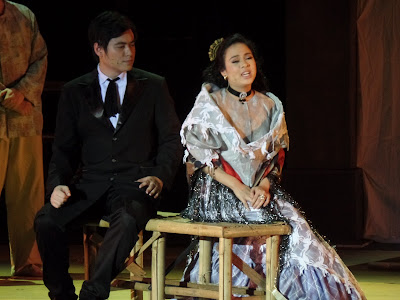 Crisostomo Ibarra was played by Jacob Benedicto. Benedicto, who joined the blind auditions of "The Voice" and was a housemate in "Pinoy Big Brother", had a pop singer's voice, but he can project his baritone higher and stronger as the songs required. Despite this being his first stage play, he did have a strong stage presence especially during the first act. However, during the second act when Ibarra was arrested, Benedicto seemed to be very uncomfortable with the torn shirt he was made to wear and it showed in his acting, which suddenly seemed awkward and tentative. I am sure he will continue to improve as the play continues its run.

(In other shows, the role of Ibarra will be played by pop crooner Michael Pangilinan. I am very curious to hear him hit the big notes, since his singing style is cool and easy.) 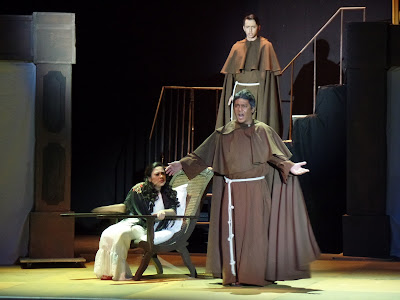 The two actors who played the antagonistic friars did well in their roles, both in acting and singing, although they may need to work on the stage presence more. Carlo Angelo Falcis comes with all the fire and brimstone of Padre Damaso, but somehow he needs to be more formidable and hateful. Carlo Mañalac only achieves the full creepiness of Padre Salvi in his scenes with Maria Clara, especially the scene with the letters.

Vien Alen King was a good Elias. Like Benedicto, King is also a product of a reality TV show -- "Protege" . However, his voice had a distinct airy quality that really stood out when singing side by side with Jacob Benedicto, who has a fuller-bodied voice. 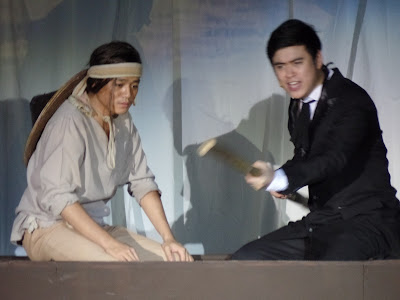 Kate Alejandrino displayed excellent dancing skills as Sisa. These were best seen during that scene where the church workers were molesting her. That scene bathed in red light was truly disturbing to watch, and I felt it may a bit too graphic and scary for young viewers. Unfortunately, I noted she may be hoarse or just had a very weak voice when she was singing yesterday. (Michaela Fajardo alternates in this role.)

Maria Victoria Mina was so over-the-top as Dona Victorina, as that role should be done. She steals every scene she is in. Her colorful ruffled gowns and ornate hats make sure of that, and also her brilliant singing voice. Her catfight with Meldea Flor Chua as the whip-lashing, leg-baring Dona Consolacion was downright fun to watch, livening up the serious proceedings. 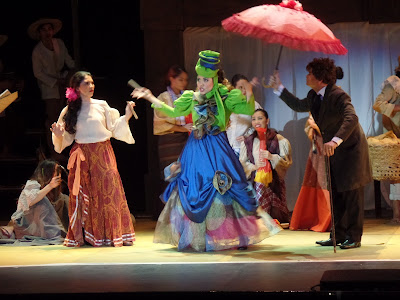 The period costumes were outstanding especially for the ladies. The main sets were also very good, providing a stage for dramatic cast tableaus. The music and the songs were very good as well. My favorite song was that one where all the main characters were singing about letters with secrets. The two emotional duets of Ibarra and Maria Clara, one for their first meeting and one for their final goodbye, were also very well-written and well-sung.

As the show I watched was the press preview, there were still a lot of technical issues that need to be addressed. The lighting seemed too weak for the big stage of the AFP Theater, and a lot of scenes looked very dark. The screen for the video projections was so dim you can hardly make out what it is showing. The sound was still rife with glitches with non-functioning microphones and loud feedback. There were also a lot of transition problems between scenes causing lags. I trust these could be addressed readily for future shows, starting on Opening Day today. 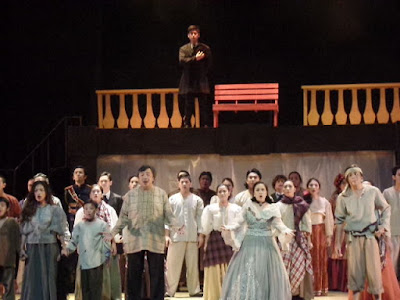 For more information, booking reservations, and show buys, call GANTIMPALA Marketing Office at tel. numbers: 998-5622 and 872-0261 or text at mobile number 0921-251 3733 or send email to gantimpalatheatermarketing@yahoo.com.