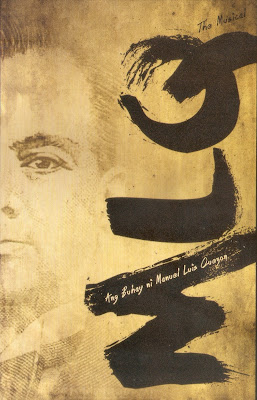 Last August 19, 2015, the occasion of President Manuel L. Quezon's 137th birth anniversary, a musical about the life and times of MLQ debuted at the brand spanking new Kia Theater, the newly-renovated New Frontier Theater in Araneta Center in Cubao, Quezon City. Commissioned by the QC government, this show was first performed in 2009 at the PETA Theater for the 70th anniversary of QC. This year, the creators were requested to restage it as part of the 75th anniversary of QC to give opportunity for more students to watch the show. 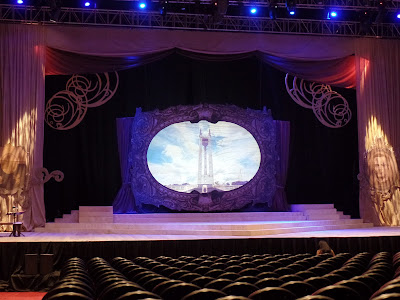 The Stage of the new KIA Theater

Three students, Manny, Louie and Quiel, have a school history research project about Manuel L. Quezon (or MLQ). They visit the QC Memorial Circle and decide to base the outline of their report on MLQ's epitaph which states: “Statesman and Patriot, Lover of Freedom, Advocate of Social Justice, Beloved of the People”. From there, we see the story of MLQ from an impoverished child from a farm in Baler, to an interno in San Juan de Letran, to a law student at the UST, his whirlwind marriage to Aurora, and his political career until he became the first President of the Commonwealth era. 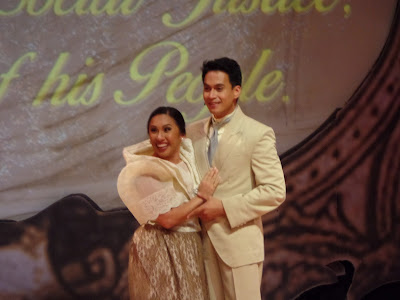 Multi-awarded film, TV and theater actor Arnold Reyes plays a dashing and dignified Manuel L. Quezon. He authoritatively declaims his speeches and pronouncements -- very presidential. He also knows how to play to the teenagers in the audience with some "kilig" moves up his sleeve, which he displayed to the delight of the girls during his scenes with Chinie Concepcion as his wife, Aurora. 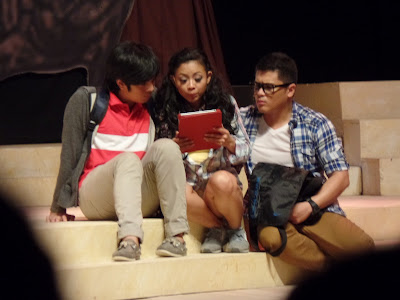 As this production is geared for high school students, the execution of this potentially dry history lesson was made more lively by incorporating various dynamic theater devices into the narrative. The three students were there so the kids in the audience will have someone to identify with. Joshua Deocareza plays the nerdy guy Louie. Ross Pesigan plays the take-it-easy guy Manny. The two of them had a faux MMA fight in the last act which was quite fun. Pesigan proved to be a favorite among the girls at curtain call. Martha Comia plays the English-speaking Quiel. It is from her that we hear the various sources of the MLQ story like books and websites. This is the most wholesome role I had seen Martha play (after "Duchess of Malfi," "The Country Wife" and "Huling Huli"). 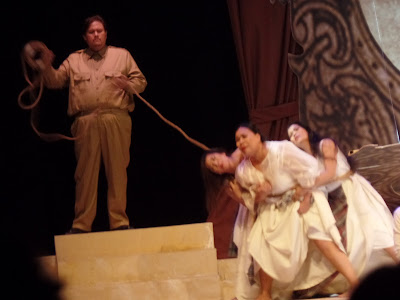 Richard Cunanan and the Chorus

There was live singing of kundiman by a trio of ladies (Kathleen Francisco, Ruth Alferez and Joann Co) as sort of Greek chorus. The kids' teacher (played by Ron Alfonso) summarized the whole timeline of the transition from Spanish to American rule with a wacky stance and style. The discussion of the Independence missions were tackled in a interview-type TV show format hosted by Quiel and Louie with guests MLQ and Sergio Osmena (played smartly by Randy Villarama) -- very nicely done. Various pop references abound from Minions to "Watch Me" by Silento which drew delighted LOLs from the young crowd. 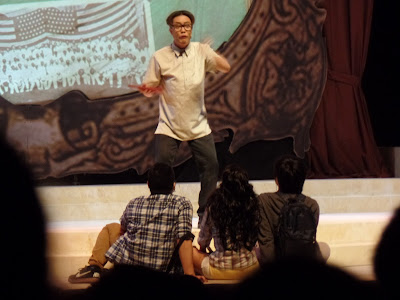 The various Spanish and American side characters were made objects of humor in side-splitting skits featuring a couple of scenes-stealing actors. Richard Cunanan took on the role of a screeching leg-baring Spanish friar, an American judge and even MacArthur himself. Topper Fabregas in particular was quite a hit with the audience with his over-the-top portrayals of a whip-lashing Cabo de Guardia Civil, an American opportunist with a deep Southern drawl and a rapping W.A. Jones of the famous Jones Law.

The show ended with the eulogy of Claro M. Recto for MLQ. While the words were eloquent, it felt too slow and long for the ending. The words were flashed on the screen behind Joel Saracho who was delivering the speech as Recto, but there were so many words scrolling upwards you can hardly follow it. Fortunately there was still a finale song number with the whole cast singing the inspirational song "Inang Bayan" (composed by Roy del Valle), saving it from a downer of an ending.

The Whole Cast at the Finale

The pace of the play was quite at a fast clip. Some of the historical data (names, dates, events) may just flash right by as they are cited. Some of the data may actually get lost during the various gimmicks -- like songs, raps and jokes -- employed to liven them up.  Teachers will have to follow this play up with a review of that period of history right away or else the opportunity may be wasted. But still I thought the writer and director George de Jesus III told the life story of MLQ quite effectively for school children within an hour and half time. As school material though, this play really needs a follow-up discussion in the classroom to be truly effective instructional material. 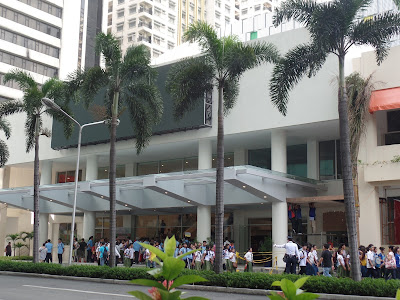 The exterior of the new KIA Theater

"MLQ" will have six more shows daily this week up to August 28, 2015, with two shows a day at 10am and 2pm, at the KIA Theater, Araneta Center, Cubao, Quezon City. Admission is FREE, but I think you have to reserve your tickets. I got my ticket reserved by contacting Ms. Chinie Concepcion via private message on Facebook.