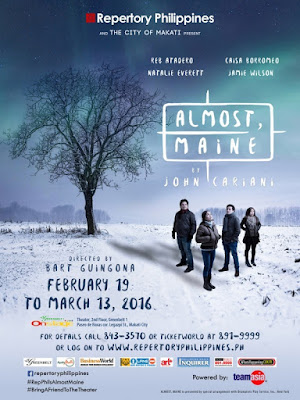 It was a Saturday night when I went to catch this show on its second weekend. While I have attended shows where the Onstage Theater was not full, but this one was the saddest attendance I have seen. I was dismayed to see that there were less than twenty people inside when I entered the auditorium. The Rep really needs to improve their publicity it seems, especially for shows with a relatively obscure title or playwright. There was so little I see about this new play of theirs in regular or social media. Nevertheless, the stage looked very good, so I was determined to stay and enjoy their show, as I usually do.

The stage only had one big square platform in the middle, and every other surface was coated in white to simulate snow. I thought this set design by Coco Anne and Baby Imperial was simple yet very well done. Together with the windy sound effects (by Jethro Joaquin), the bluish lights and the "steam" behind the characters (by John Batalla), the winter illusion was complete and realistic. The emptiness of the auditorium made the desolation of the setting even more felt.

"Almost, Maine" by John Cariani is a collection of unrelated vignettes about 21 characters who lived in an imaginary town in the northeasternmost tip of the US, where winters were harsh and where the Northern Lights play in the sky. There were only two characters in each scene, except one with three. All the scenes tackled various aspects of love -- falling into love, falling out of love, regretting love, hurtful love, hopeful love, affirming love. These 21 characters were played by 4 actors, upon whose charisma the success of this simple yet whimsical play rests.

Reb Atadero is really very good in playing eccentric characters, just like he did in his breakthrough role of Benjamin Braddock in "The Graduate" (also by Rep 3 years ago). Among the four actors on the stage, I thought Atadero was best able to project the strangeness of the situations being depicted in the vignettes assigned to him. He was very good as East in the scene called "Her Heart" and as Danny in the scene called "Story of Hope". He had this Jesse Eisenberg vibe going on which makes his stand out from the rest.

Jamie Wilson is such a veteran already with all these unusual roles he is given to play. Only he could have pulled off the role of Pete in that weird "Prologue-Interlogue-Epilogue" scenes or as Steve in the scene called "This Hurts" with his trademark teddy-bear innocence and charm. Wilson's age may sometimes get in the way of roles like Chad in "They Fell" or Dave in "Seeing the Thing", where a younger millennial actor may have been better cast.

Caisa Borromeo was in three straight scenes in the first act. Her performances were good, but nothing that really grabs you. Her best scene would be that in "Story of Hope" where she really shone as Hope, the girl who goes back to her hometown to finally answer the question of a suitor she left hanging years ago. This was the only scene that I felt chemistry between Borromeo and Atadero, barely felt in their two other scenes together. "Getting It Back," the last scene of Act One also with Borromeo and Atadero, did not work for me.

Natalie Everett works very hard to make her roles pop, but with inconsistent results. I thought the role of Rhonda in "Seeing the Thing" was not really fit for her as her acting efforts were very evident. That scene was not comfortable for me to watch and it was even the very last scene. However, in total contrast, she was really so good as Marci in the scene called "Where It Went." Her subdued, natural yet powerful performance in that scene alone made up for everything else.

Overall, Rep's production of "Almost, Maine" as directed by Bart Guingona is an "almost" success. The general feeling is good, but it was a mixed bag. When it works, it really works; but some scenes did not really fly. Being love stories, this depends heavily on the chemistry between the cast members, which was not always there. The various roles assigned to the cast members did not always feel right for them -- be it by look, by age, or by personality --which may affect the success of their scene as it toes the line between cute and corny.

Still, the script and production as a whole were very charming in their own odd little way, and is certainly worth checking out for fans of quirky rom-com films and plays. This should be seen by more young people for whom themes like these would definitely connect more. That empty Saturday night when I watched it was just a one-off fluke. That really should not happen again in the next two weeks of this play's run. It deserved more love than that.

“Almost, Maine” plays Friday and Saturday evenings at 8 pm, with Saturday and Sunday matinees as 3:30 pm, until March 13 at the Onstage Theater in Greenbelt 1, Paseo de Roxas cor. Legazpi St., Makati City. For tickets, call Repertory Philippines at 8433570 or TicketWorld at 8919999. Ticket prices range from P400 to P800.