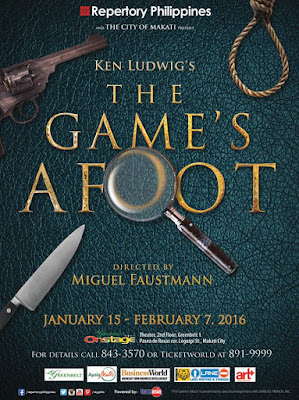 Since I was younger, I am a big fan of detective books and films, from the Hardy Boys to Agatha Christie to Arthur Conan Doyle. That was why when Repertory Philippines announced that their first play for this their 49th season was a whodunit-comedy entitled "The Game's Afoot" (written by Ken Ludwig and first staged in 2011), I was excited to go see it. However, because of busy schedules at work, I was only able to watch it yesterday, on its very last day of the run.

William Gillette was a stage actor best known for his portrayal of Sherlock Holmes in the 1930s. He was injured by a real gunshot during the curtain call of his final performance in New York. So while convalescing from his injury, Gillette invited a few friends over for a Christmas Eve dinner at his isolated Connecticut mansion. When an actual murder happens that evening, Gillette literally donned his Sherlock Holmes garb to figure out who the killer is.

The guest list include William's mother Martha and William's co-stars in his latest play - veterans Felix and Madge Geisel, the debonair Simon Bright and the ingenue Aggie Wheeler. The plot thickens when vicious gossip-mongering reporter Daria Chase makes an appearance. As expected there was a lot of witty repartee and puzzling plot twists to make this a pretty engaging and entertaining, albeit old-fashioned, ensemble play. 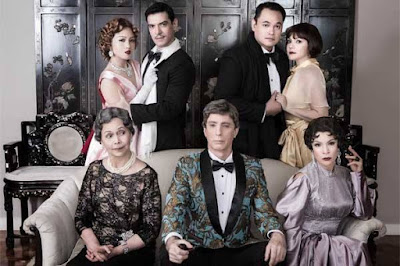 I think Paul Holme could do parts like William Gillette blindfolded already. He was so much into Gillette's skin, it felt like he was actually playing himself as he snugly fit into that Sherlock Holmes cape. Jeremy Domingo is so comfortable in these bumbling best-friend roles like Felix, much like his character in "Run for Your Wife", only wearing a tux this time. Jay Glorioso is cozily doing these mother roles once exclusively Joy Virata's turf. (Ms. Virata actually alternates in this role.) It was fun to finally see Hans Eckstein play a numbskull character like Simon.

I did not recognize Pinky Amador as she arrogantly strutted onstage as the arch, bitchy and scandalous Darla Chase. Ms. Amador can really transform into these interesting characters she picks, as she always had in her other plays like "August Osage County" and "Piaf." That role that the juiciest lines and the most surprising (and hilariously macabre) scenes. This was truly the centerpiece role of the whole play, and Ms. Amador absolutely commanded it.

The rest of the roles were filled by promising newer names: Mica Pineda (as Aggie), Christine Flores (as Madge) and Natalie Everett (as the Inspector). Pineda and Flores looked and acted very convincingly as glamourous Broadway stars of the 1930s. Ms. Everett looked so awkward and unlikely as a pioneering female detective (which may be how the role was originally described), but she got to deliver some pretty funny lines as this cop was also a frustrated actress. 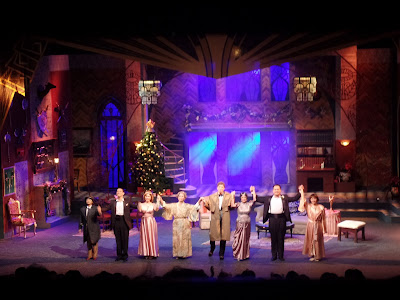 I felt this play was also very interesting because the story involved theater people and their quirks and idiosyncrasies. Since I write about theater, one line by Martha Gillette really stood out for me. "She's cruel. She's evil. She is a theater critic, you know." This line had me laughing out loud like a crazy person. Subtle wit like this is truly hard to come by these days.

This is the type of play that only Repertory Philippines can deliver so well. As evidenced by the near full house in yesterday afternoon's final matinee show, there is still a healthy market for these traditional genres of theater. The Rep is approaching 50 seasons of existence, and it remains to be relevant today. This is despite the emergence of more modern and much edgier theater fare in Manila's very vibrant theater scene now, itself a fruit of Repertory's pioneering efforts.

As a bonus for watching yesterday afternoon's finale show, we were also able to see and hear Rep stalwarts Joy Virata and Baby Barredo pay tribute to the late Ms. Zenaida Amador, whose 83rd birth anniversary they celebrated yesterday. It was Ms. Amador and her signature brand of theater discipline who raised Repertory Philippines up from its shaky birth to the institution it is now. It was interesting to hear Ms. Virata estimate that probably 70% of local Filipino theater actors/crew members became part of Repertory Philippines.