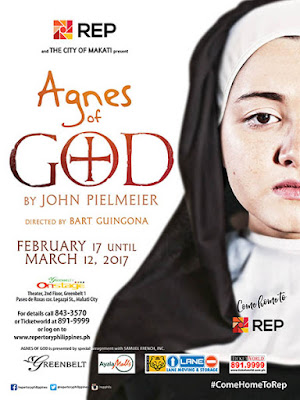 A dead baby was found in the wastepaper basket inside the room of young novice Agnes. She does not have any memory about the event. Mother Miriam Ruth, the Mother Superior of the convent, is very protective of her delicate young ward. However, the court-appointed psychiatrist, Dr. Martha Livingstone, is determined to get to the bottom of the crime, using hypnosis and whatever else it took.

I am familiar with this title. There was also a film version of "Agnes of God" in 1985 directed by Norman Jewison. The cast included Anne Bancroft as Mother Miriam Ruth and Jane Fonda as Dr. Livingston, with Meg Tilly as Agnes. Bancroft and Tilly were nominated for Oscars for their performances. Tilly won the Golden Globe as Best Supporting Actress.

Even before that film in 1983, Repertory Philippines staged the original play version. I may have watched it, I am not sure anymore, I was still very young. The cast included the two pillars of Repertory Philippines -- Zenaida Amador as Mother Miriam Ruth and Baby Barredo as Dr. Livingstone --with Pinky Amador as Agnes, for which she won her first Aliw Award for Best Actress in a Play.

Now for the second offering in its 50th season, Repertory Philippines is again staging "Agnes of God." They have pulled no punches in their powerhouse casting for this show. Pinky Amador is back on board again, but this time she is playing Mother Miriam Ruth. Menchu Lauchengco-Yulo is Dr. Livingstone, and the title role of Agnes played by promising ingenue Becca Coates.

Bart Guingona directs this show, and he clearly did not settle for anything less than stark perfection. The stage only had a chair or two on it. Nine big bare panels serve as the backdrop. That was all the set Joey Mendoza needed for this intense acting vehicle. Nothing will distract you from the actresses. There were only three actresses there on that stage yet they filled it up with their powerful presence. The lights behind the panels by John Batalla and the sound and vocal enhancements by Jethro Joaquin create an eerie monastic atmosphere.

All three actresses had their big moments on their own, delivering lengthy soliloquies with such brio and exuberance; and with each other, playing off each other's passion. The script of John Pielmeier gives his actresses ample room to navigate the deepest of emotions from ecstasy to despair, from pity to fury. Amador, Lauchengco-Yulo and Coates never backed off from that formidable challenge, constantly giving us 100% of themselves in their characters.

Amador and Lauchengco-Yulo are already known quantities for their acting talent, but they manage to even exceed my high expectations. Even if Pinky Amador may physically seem too young to play a strict jaded Mother Superior, she convinces us that she was one by the sheer gravelly grit of her voice as she delivered her world-weary lines which dripped with bitterness. Menchu Lauchengco-Yulo never missed a beat as the chain-smoking doctor. Her psychiatrist was frank and straightforward, yet caring and empathetic. That chest-beating scene is simply so potent.

This is my first time to see Becca Coates in action as I missed her mainstream debut as a girl dying with cancer on "Dani Girl". As Agnes, she reminded me of the raw talent exuded by a young Monique Wilson. Her look and her voice were angelic and innocent, yet she made us feel Agnes' fractured psyche. In a riveting performance belying her age (only 19-years old!), Coates' Agnes teetered on the edge of sanity, never really letting us have the satisfaction of knowing what really happened -- no mean feat. She was so realistic, even her stigmata did not seem impossible.

It is only February, but as early as now, I am already expecting all three of them to be vying for Best Actress accolades in the awards season by year's end. If there was an award for Best Ensemble in a Play, I would say that this cast is already the solid favorite to win. Everyone was performing at her absolute best the whole time. The little nuances of each character were all always in full display. The material is no doubt controversial, even offensive for some conservative Catholics. However, as a pure acting showcase, this articulately-written play was a true masterclass. 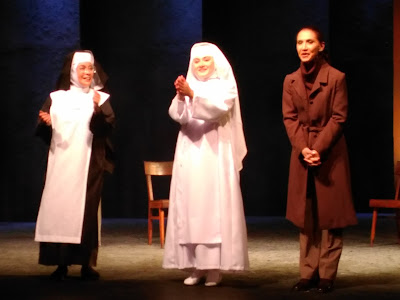 “Agnes of God” opened last February 17 and will run until March 12, 2017 at Onstage Theater in Greenbelt 1, Makati City, with shows at 8 pm on Fridays and Saturdays, and 3:30 pm matinees on Saturdays and Sundays. Ticket prices range from P1000 to P600.