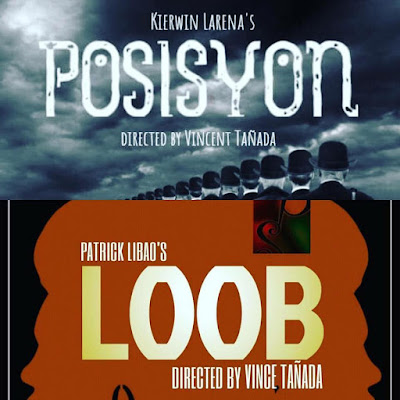 This is already the 11th year of the Theater Festival held every summer by the Philippine Stagers Foundation. This is only the first time I had ever attended one of their sessions, held for four consecutive Saturdays each summer. Each Saturday there would be at least six original one-act plays -- two amateur, from their summer workshop participants: two from collegiate theater organizations, and two by members of PSF themselves. This was held in the intimate setting of the PSF home theater along G. Tuazon St. in Sampaloc, Manila.

This is a competition to be judged by a distinguished panel of judges, this year including award-winning writers Atty. Nicholas Pichay and Moira Lang, and actors Patricia Javier and Mike Lloren. Listening to the funny, meaty and instructive commentary of this panel of experts was very eye-opening as they spoke from their own trove of experiences in the world of theater. Their notes and suggestions were indeed very rich lessons in theater craft for the cast and crew, and in theater appreciation for us theater fans. 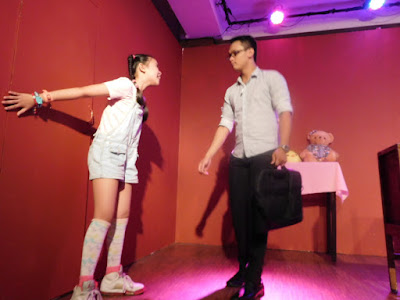 Trisha and her tutor Daniel in "Puppy Love"

I came in about 4 pm already, but I was still able to catch the two amateur plays about children written by the same playwright Jomar Bautista. The first play "Puppy Love" was about a 10 year old girl Trisha and her crush on her 23 year old tutor Daniel. The topic was not exactly too comfortable to watch for a parent like me. However, the simple premise of seeing puppy love in the child's point of view was quite cute, especially since the spirited young aspiring actress from Cagayan de Oro Chill Paloma Albasin portraying Trisha is really 10 years old. This was directed by Rotsen Etolle. 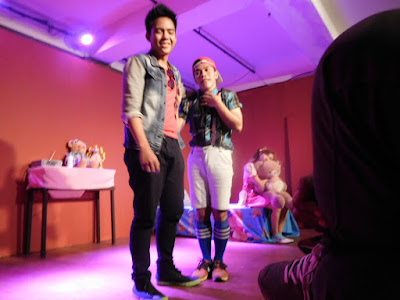 The second play "Fan" was about a 10 year old boy Francis who was secretly gay. That night, he had his friend Trisha (played by different actress now) over for a sleepover. I am not sure why Trisha was allowed to sleep in Francis' room if the parents were not aware he was gay. I would not know if this is really how gay boys behave in their bedrooms as they fantasize over a poster of their favorite male singer, but I guess the current over-the-top standards set by Awra (in turn influenced by Vice Ganda) prevailed in this characterization. The huge guy playing Francis' mom attacked his character the same exaggerated way, with hilarious results. This was directed by Gerald Magallanes. 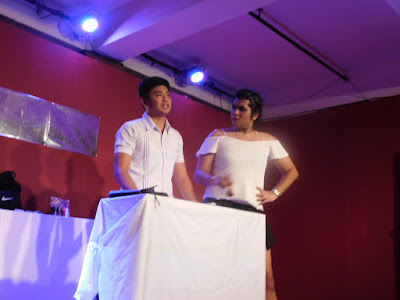 The next play "Kolorete" was competing in the collegiate category, and was from the Colegio de San Juan de Letran. This play was about a day in the life of a gay make-up artist named Tara who worked in the salon of Madame X. His customers that day include a pressured student who failed in school, a hero cop, a battered wife, an abused child and finally, his own mother. The progression of the play was quite puzzling and long-winded, but when you realize what's going on, you will understand why it went on that way. Adjustments could still be made to improve on what is already a solid story concept.

After a 15 minute break, it was the turn of the plays written by Stagers to be presented. Both were directed by Atty. Vince Tanada himself. According to both writers, they only submitted their final scripts earlier this week and their casts barely had time to get their acts ready. In fact, both of these shows only had their first and only general rehearsal last night. This fact made the actual performances we saw tonight all the more impressive. Also amazing was the fact that the writers were also actors in other plays in this same set. 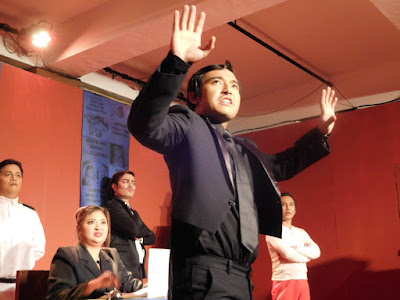 The first Stagers play was "Posisyon" written by Kierwin Larena. It was about an opening for one certain unspecified position where the applicants were various Filipinos throughout Philippine history, including Rizal, Bonifacio, Aguinaldo, Mabini, Juan Luna,  Marcelo H. del Pilar, Tandang Sora, Gabriela Silang and Sultan Kudarat. The concept is quite iconoclastic as it pits one hero against another using scandalous bits of information known about them. This resulted in an irreverent yet very entertaining play. The ending was a big question mark for me though. I don't think I understood why it ended that way.

The second Stagers play was "Loob" by Patrick Adrian Libao. There were only two characters -- Mika, a male ballet dancer who was brought up thinking he was female by his mother, a prima ballerina of the Bolshoi Ballet; and Mika, his favorite doll, a silent witness to everything happening in that damaged household. How Libao was able to come up with such a psychologically exhausting script in two days is a miracle of writing talent. 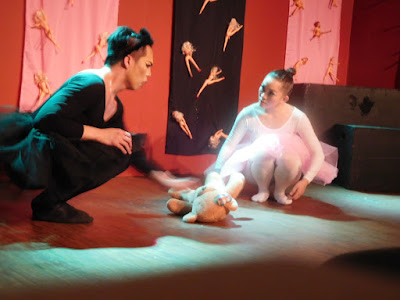 Mika and Mika (Magallanes and Golondrina) in "Loob"

The performance of Gerald Magallanes, the Stagers resident choreographer, as the ballet boy Mika was bold and graceful in the course of his painful self-discovery, literally baring himself body and soul on that stage (and for a significantly long time). His intensity was matched stroke for stroke, step by step by Arian Golondrina, who amazed everyone with her fluid versatility as she seamlessly transitioned from sympathetic doll Mika, to invalid father to dominating mother, even dropping a few lines in Russian. A thunderous standing ovation greeted this mesmerizing play when it ended, all truly deserved! 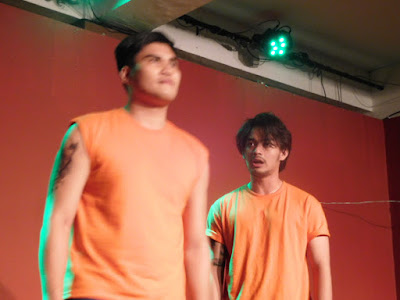 As a bonus for this night, Vince Tanada presented one more play not in competition. It was a performance of his own two-hander play, "Dilaw o Pula," starring Kierwin Larena and Chris Lim as two political inmates, the Marcos-loyalist Emil and the Aquino-loyalist Benjo respectively. They were awaiting the announcement if they would be among those pardoned and released by the president that Easter Sunday which was the usual custom. This was one heavy play with both politically, emotionally and visually vexing moments. This play is truly signature Vince Tanada in its script and execution.

It was already 9 pm when that day's activities wound down. Three Saturdays down and one more Saturday to go before this year's PSF Theater Festival concludes its run. Even if I just watched this week, I think I may have already seen the winners for best play and best acting. In any case, win or lose, the intensive exposure of these aspiring theater artists to all aspects of theater production during this festival is an invaluable enough reward.