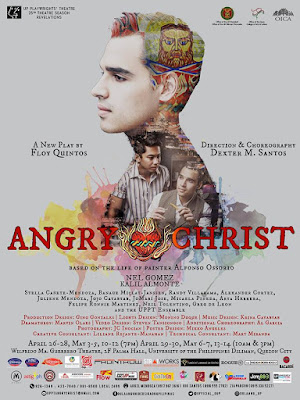 UP Playwright's Theater (UPPT) is an arm of Dulaang UP started in 1986 by Antonio Mabesa to exclusively stage original plays by Filipino playwrights. As I reviewed the list of plays produced by UPPT, I realized that the only play of theirs I had seen before was "Death in the Form of a Rose" by Anton Juan, and that was back in their 5th season (1991-92), staged at the Teatro Hermogenes Ylagan in the Faculty Center.

The first Floy Quintos play I had seen was "Collection" staged by Dulaang UP in 2013 (MY REVIEW), directed by Dexter M. Santos. I had seen two other Quintos - Santos collaborations since then, both by Dulaang UP -- "Ang Nawalang Kapatid" (MY REVIEW) and "Ang Huling Lagda ni Apolinario Mabini" (MY REVIEW)-- both excellent shows as well.

This new Quintos - Santos collaboration is inspired by the real life story of Alfonso Ossorio, a Filipino artist who painted on a wall in the sanctuary of a chapel in Victorias, Negros Occidental in 1950. The creation of this mural, called "Angry Christ," was the source of much turmoil and controversy for Ossorio, but it eventually became a high point of his career as an artist, and the work he will be remembered for in the land of his birth.

I did not know that this play was based on a real person or events. I confess that I had never heard of Alfonso Ossorio the artist, or about this bold church mural of his before watching this play. As the play unfolded, I recalled Quintos' other play about art that I had seen before -- "Fluid." (MY REVIEW). I was swept with the feeling of how this story of artistic angst was perfect for Floy Quintos to weave his dramaturgical magic.

Quintos built up dramatic tension of Ossorio's internal and external struggles with such eloquent impact. While he admits literary license with the inclusion of a Christmas manger scene and Holy Week penitential rites, but these were very vividly effective in making the audience understand Ossorio's fascination with the Christ figure. Quintos credits art consultant Liliane 'Tats' Manahan for keeping his script loyal to artistic temperament of his subject and assuring accuracy in the production design of Gino Gonzales. He uses the device of Lecturer, smartly played by Micaela Pineda (alternating with Arya Herrera), to deliver the expository details.

For a second consecutive time this year, Nelsito Gomez is playing an artist with a controversial painting about Jesus Christ against popular conventions of religious art. In "My Name is Asher Lev" (MY REVIEW), Gomez played a Jewish artist who faced controversy with his avant garde painting of a crucifixion scene.

As Alfonso Ossorio, Gomez here faced similar artistic dilemmas but with more complex conflicts. Instead of mere canvas, his painting will be on a wall to be seen by simple farmers every time they hear Mass that in that chapel. Artistic conceits aside, Ossorio was a wealthy man whom the whole community kowtowed to and called "señorito". On top of all that, Ossorio was also a homosexual, feared and derided by society. To his credit, Gomez was able to delineate one conflicted artist character from the other, which is no mean feat. This was definitely not just a case of Asher Lev transported to 1950s Negros.

Playing the innocent farmhand Anselmo in perfect contrast against Alfonso's worldly gay artist is Kalil Almonte. As with his past plays that I had seen like "Games People Play" and "Fluid", Almonte can convincingly play a country bumpkin ripe for corruption with his wide-eyed quizzical look and his heavily-accented line delivery.

Adelaide de Bethune was a Belgian-born American artist who did the mosaics of the chapel's outer walls. Banaue Miclat-Jannsen gave her such a charming and delightful disposition, especially when she was able to pick up the native language. There was a scene there when Ade had to shout, and I feared for Ms. Banaue's precious vocal folds for a while. (Stella Cañete-Mendoza alternates in this role.)

Padre Nunelucio was the local parish priest who represented the Church's resistance against Ossorio's progressive artistry. He was played with studied wariness by ever-reliable Juliene Mendoza. (Jojo Cayabyab alternates in this role.) Jose Nava was a Communist rebel who used to be an artist, actor and writer. He was played with powerful dignity by Greg de Leon. (Neil Tolentino alternates in this role.) Alexander Cortez, Randy Villarama, Felipe Ronnie Martinez and Jomari Jose complete the primary cast. 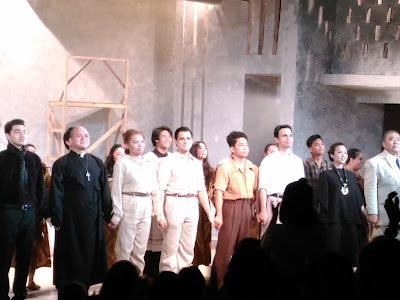 The lighting design of veteran Monino Duque was on point throughout. The musical score of Krina Cayabyab consisted of traditional folk songs, classical tunes (Verdi, Chopin) and jazz classics (by Gershwin, Holiday). I had never seen video designs so critical in the success of a production than the work of Steven Tansiongco here.

Dexter M. Santos translated Quintos' ideas so well on that stage with such vibrancy of vision, with his own distinctive brand of fluid stage choreography. The two and half hours (with 10 minute intermission) of the play never became dull even if it had several scenes of deep wordy internal dialogue. The climactic reveal of the final mural at the end was so enthralling and magical that the whole audience was in absolute awe.