Review of Artist Playground's FLY ME TO THE MOON: Dark, Downbeat and Daring 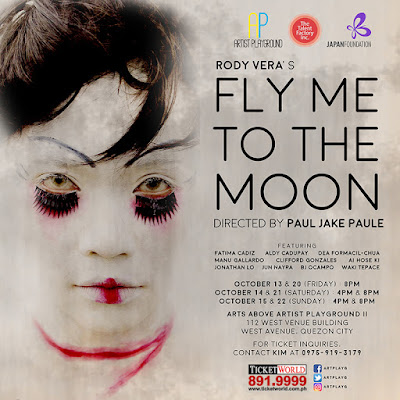 Last year, Artist Playground presented Rody Vera's "Happiness is a Pearl" (MY REVIEW) at their Little Room Upstairs. This was a Japanese-themed play about what a person would do for love. This play was re-staged just this August to September, this time at a bigger venue in Arts Above on West Avenue. It turns out this re-staging was to prepare the audience for yet another Japanese-themed play by Rody Vera, also about love. But this time, "Fly Me to the Moon" would be about what love can do to a person.

Jo, a Japanese prostitute (or karayuki-san), and Melanie (a.k.a. Manuel), an aspiring Filipina transgender entertainer, meet onboard a dingy sea vessel en route to Japan. Jo told about why she was sent abroad to do her dirty job and her tragic forbidden affair with Muslim islander Ibrahim. Melanie told about her. Melanie told about how her dream to become a full-fledged woman drove her to ditch safety and stowaway on this ship. 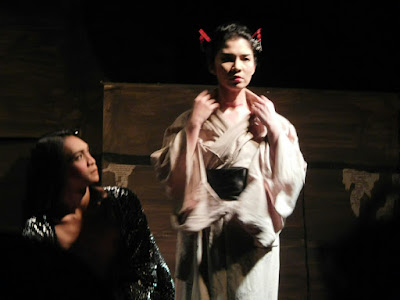 From the get-go, you will note a puzzling temporal disconnect between the two main characters. Jo is demure and formal, dressed up in a kimono, humming standards like "Fly Me to the Moon". A karayuki-san was a Japanese woman from very poor families who were sold abroad to work as prostitutes in the first half of the 20th century. Melanie is clearly from a more recent time, a loud Japayuki-wannabe dressed in garish robe of silver lamé, singing gay anthems like "I Am What I Am".  This anachronistic contrast is not accidental and is essential to the story of Vera's play.

The historical background behind the character of Jo is interesting. I never knew about karayuki-san before and was surprised to learn that international sex-trafficking happened even in those early days. In Jo's case, she was sent to a brothel in Southeast Asia (Sandakan in Sabah, Malaysia) to earn the price for his brother's "becoming a man," hence we see men dressed in tribal costumes as her customers and her true love Ibrahim.

We can imagine how Melanie may have snuck up into the boat, but how did Jo get up there? Did she just board the boat with her Cat at the same time with Melanie? Or had she been in the boat the whole time? If it is the former, what made her decide to board the boat at that time after all those years? Did she see Melanie as kindred spirit? If it is the latter, how can a small boat remain seaworthy enough for fifty or more years to make the long sea voyage from the Philippines to Japan? Then again, maybe we do not really have to think too much about this issue.

Dea Formacil, who was just fresh from playing Maria Clara in "Kanser," now makes a complete turnaround to play the jaded karayuki-san Jo. Her acting style is appropriately subtle given the historical context of her character. Her delivery of lines was clear in her delightful Japanese-inflected English. Formacil had to portray her own flashback scenes so it must have been exhausting for her to move from one stage to another. (Fatima Cadiz alternates as Karayuki.)

Xosh Ardio is raw, "out-there" and over-the-top as Melanie, providing the energy to counter the oppressive darkness. It must have been difficult for this her to spend the whole time on stage topless (I guess this was a metaphor for his openness) or holding up a loose-fitting bra (should be fixed in the regular run). Melanie had another actor playing his flashback scenes, so Ardio is spared from costume change problems, but this may be confusing for the audience at first. I know Melanie was supposed to be a lousy singer, but I wish she could try to sing "Fly Me to the Moon" better. That was such a emotionally-charged scene, but its effect is hampered by the tuneless singing. (A.I. Hose Ki and Aldy Cadupay alternates as Melanie).

Clifford Gonzales played Ibrahim, Jo's lover. He also doubles as the cat that accompanied Jo on the boat. The symbolism is apparent, and actually rather cute, given the dire circumstance they were in. (Ar Ar Ramilo and BJ Ocampo alternate as Ibrahim.) Manu Gallardo, who played Japanese officer Hirohito in another Artist Playground play "Lagablab" (MY REVIEW), again plays a Japanese baddie here, as the Captain of the ship the two main characters were on. (Jun Nayra alternates as the Captain.) 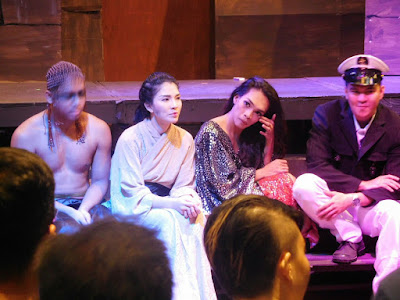 "Fly" is more daring and more downbeat than "Happiness" was, as it dealt with brothels and deaths. The mood is persistently dark and gloomy throughout and the dim lighting design made sure we felt it. There was just a shrill panel of silly judges at an audition of gay singers that provided the only scene with laughter.  There are multiple scenes that dealt with illicit and forced sex which makes this play for mature audiences only.

There is one main stage in the center where Jo and Melanie were talking, while their flashbacks were happening in two other smaller stages on either side. One limitation of the stage design was that it failed to consider that the seats of the audience were at the same floor level. People who sat on the third row already cannot see what was going on on the foreground so we had to stand up to see some scenes better. I hope this problem can be rectified during the regular run. This was not a problem in Little Room Upstairs because the bleachers were elevated.

Being still the press preview a week prior to opening day, there were still some problems in the sound department. Sometimes the background music would be too loud or tinny, tending to drown out the dialogue on stage. There was a very ingeniously staged scene where the Captain was speaking to Melanie in Japanese (how accurate, I would not know), and in the background Jo and the Cat were translating was he was saying real time. The idea was great, but the execution still needs polishing since the overlapping lines were difficult to understand at times. 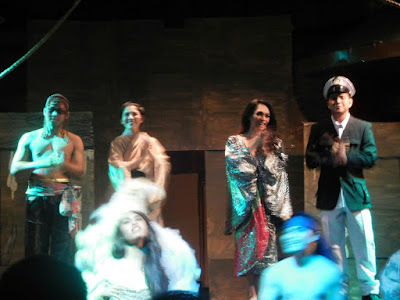 The main cast at the curtain call

There is however a major error of anachronism in the main song hummed by Jo in the play, which is fact also the very title of the play (making it difficult to rectify). "Fly Me to the Moon" was written by Bart Howard and  released as a recording (by Kaye Ballard) in 1954. The most popular version by Frank Sinatra was released in 1964. Karayuki-san like Jo were supposed to have existed before World War II, in the 1930s. I am sure playwright Vera had any compelling reasons for choosing this particular song for this play.

Congratulations to director Paul Jake Paule for the imaginative direction of the complex script by Rody Vera that involved a lot of scene changes and flashbacks, which could have been more confusing in lesser hands. The transitions between those flashback scenes (especially those scenes not directly involving the main characters) could still need some smoothing out and streamlining for better understanding of the story.