Recap of THE MUSIC OF JOSE MARI CHAN: Treasure Trove of Timeless Tunes 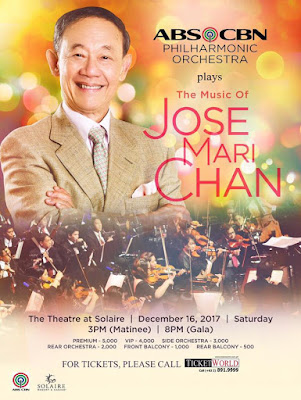 I had known about Jose Mari Chan and his music since I was a child. I had seen him sing a song or two at some special occasions before, notably our silver high school homecoming back in 2008, but never a full-length concert. This year he is celebrating 50 years of an evergreen music career. This concert, written and directed by Mickey Munoz and held two times yesterday at the Theater at Solaire, is a tribute of the ABS-CBN Philharmonic Orchestra for his unique signature style of OPM, unmatched from then till now.

The concert began with an Overture played by the orchestra, led by Maestro Louie Ocampo. The legend himself came onstage to sing "Can We Stop and Talk Awhile". After cracking some pretty funny jokes, he announced that he was going down to the audience to enjoy the rest of the show. I was surprised by this development and I am sure everyone else was too. So, it turned out this was really going to be a tribute by other singers to his songs, not by himself. An introductory video by Gerard Salonga brought us back to the beginning of Mr. Chan's 50 year journey.

First up were Mr. Chan's own sons Franco and Joe Chan, who sang "Mr. Songwriter." This was the same tune used for "Mamang Sorbetero" by Celeste Legaspi (who was in the audience herself last night). The two guys proudly talked about how their father, then working in the family sugar business in Iloilo, started his entertainment career as a host and singer on the ABS-CBN TV show "9 Teeners" in 1965. This later led to his first single, a hit entitled "Afterglow" in 1967, which the two also sang together as a duet. Their set ended with their version of "Deep in My Heart." 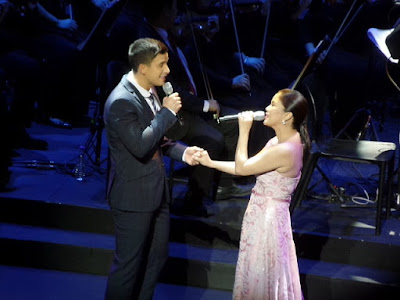 Markki Stroem came onstage to sing the modern classic "Beautiful Girl". He then introduced Juris who sang a song Mr. Chan wrote for his 7th wedding anniversary -- "A Love to Last a Lifetime". Markki then came back to join Juris to sing "My Girl, My Woman, My Friend." Upcoming singer and guitarist Migz Haleco then sang his own versions of "Can't We Start Over Again" and a song I never knew was a JMC composition till now -- "I Remember the Girl" (or "I Remember the Boy" as more popularly recorded by Joey Albert).

After the orchestra then played an instrumental version of "Stay My Love". The young vocal group Acapeliago came onstage for a poppy rendition of "Afraid for Love to Fade".  They were joined onstage by Jona, and they sang a beautiful acapella version of "Minsan Pa," in what I thought was the best vocal performance of the night. This song had lyrics written by National Artist Rolando Tinio, and was originally by Janet Basco in 1978 as one of the finalist of the first Metro Pop Festival. The vocal arrangements in this segment were by Moy Ortiz of The Company. 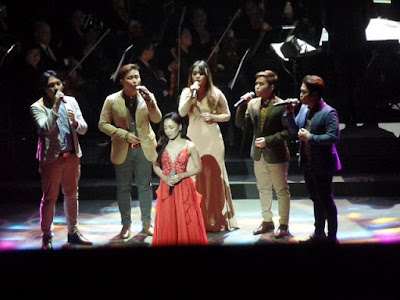 The next number was a very entertaining medley of commercial jingles composed by Mr. Chan by another young vocal group, Vocal Synergy. We heard very familiar ads of  Alaska Milk ("Wala Pa Ring Tatalo"), Sunquick ("Over Twenty Glasses"), Mr. Clean ("Kuskos Piga"), Hallmark Cards ("No One Throws Away Memories"). One particularly funny one was that for Knorr Real Chinese Soup, where Louie Ocampo joined in. He later shared that he was actually the original singer of that jingle. The orchestra concluded the set with instrumental versions of "Big Beautiful Country" (the official theme music of the Banahaw Broadcasting Corporation BBC Channel 2) and "Love at 30,000 Feet" (Philippine Airlines).

Bituin Escalante came onstage to sing another song I never knew was composed by Mr. Chan -- "Hahanapin Ko" (VIDEO). This song had lyrics written by Jimmy Santiago, and was one of the finalists of the Third Metro Pop Festival in 1980, interpreted by Anthony Castelo. After an emotional spiel, Ms. Escalante sang a very different, very jazzy (with scatting!) version of "Thank You Love" as arranged by JD Villanueva. 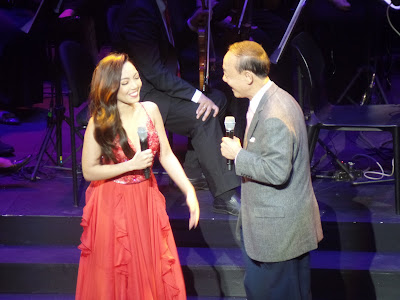 Mr. Chan jokes around with Jona before their duet

The orchestra proceeded to play an instrumental version of "Please Be Careful with My Heart". Gerard Salonga came back on video to invite Mr. Chan back onstage to sing this same song as a duet with Jona (VIDEO). We were so glad to see Mr. Chan back onstage to sing some more. Before the song, Chan greeted old friends in the audience (some Fookienese greetings in there) and then went on to crack another series of jokes (a few green ones in there, haha!) I did not know he was such a joker in his spiels. The audience lapped it all up with glee.

After the beautiful duet, Mr. Chan stayed on to sing "Tell Me Your Name" (a song with lyrics by Cristina Tabora) and "Refrain" (a sad song written when Ms. Mary Ann was abroad). Then all the guest artists Stroem, Juris, Migz, Jona and Escalante returned onstage to join Mr. Chan sing "Constant Change." 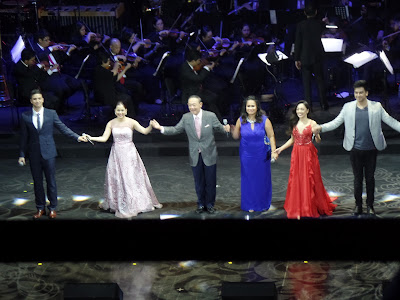 As a finale, Mr. Chan ended his concert with his Christmas carols, beginning with "A Wish on a Christmas Night" (sung by Vocal Synergy & Acapeliago), "A Perfect Christmas" and finally his classic "Christmas in Our Hearts" (VIDEO) where he was joined by his children Joe, Franco and his original duet partner Liza. He invited the audience to buy his latest collection of all-new Christmas songs and he will be outside to sign autographs and take pictures. The long lines for this after-show activity was proof that the legacy of the indefatigable Mr. Jose Mari Chan is as vital now as it was back then.