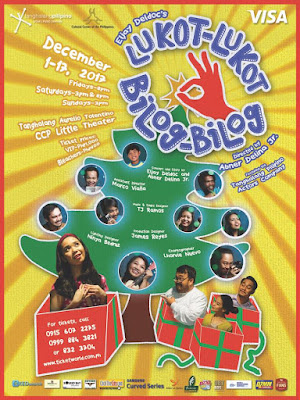 Gwyneth just received P1,200 from her godparents as an early Christmas present. She decides to use this to pay her college application fee. On her way to St. Anne's University though, she gets tempted to buy a very popular special spaghetti dish in the cafe, a cute green polka dot dress on sale at the boutique, a discounted bus trip to Bicol -- all of which she desired a lot. Will she have enough money to apply at the college of her dreams?

For Tanghalang Pilipino's Christmas offering, they chose to stage a play Eljay Castro Deldoc for young people about managing finances. I have seen three plays written by Deldoc all at the Virgin Labfest. These were the unforgettable "Si Maria Isabella at ang Guryon ng mga Tala" (MY REVIEW), the hilarious "Ang Goldfish ni Professor Dimaandal" (MY REVIEW), and the outrageous "Pilipinas Kong Mahal with All the Overcoat" (MY REVIEW). I know for a fact that this guy can really communicate with the young people.

The core of the play is very simple, something school children may in fact whip up themselves when given a topic about saving money. However, in the hands of a Palanca-winning wordsmith like Deldoc, together with the ideas of director Abner Delina, Jr., the plot was elaborated into an engaging full-length play with a lot of millennial humor and imaginative storytelling devices to liven things up. The production design of James Reyes was deceptively simple, but delivered several surprises in the course of the show.

Blanche Buhia was a cheerful and naive Gwyneth. She may not be able to control her spending, but you know she had a kind heart in her. Eunice Pacia was a loyal and concerned best friend in Jing-jing. Being the younger members of the TP Actor Company, I have seen these two girls mostly in supporting roles. (I missed Buhia's Gawad Buhay nominated lead role in last year's "The Wong Kids in the Secret of the Space Chupacabra Go" also by TP.) Here in "Lukot," the two carried the show ably with their verve and charm.

Playing various other roles in the ensemble were Doray Dayao (who played a persistent travel agent and Mayon Volcano), Aldo Vencilao (who played a sleepy cashier and Andres Bonifacio), Ybes Bagadiong (who played various sidekick characters, including one in drag) and Joshua Tayco (who played a desperate thief and Jose Rizal). Child actor JM Canlas played the beggar boy Nico. Canlas gets to sing the beautiful wartime carol by Felipe de Leon "Payapang Daigdig." Aside from this song, other Filipino carols were also sung with some lyrics altered to fit the theme. 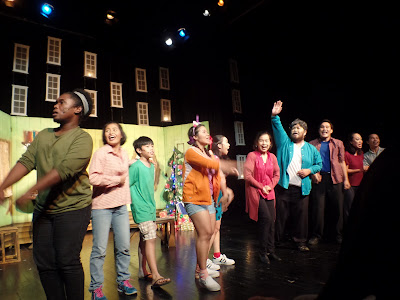 The cast take their bows after the show

It was refreshing to see the Tanghalang Pilipino actors all smiling in very light-hearted roles after their very intensely serious turns in their last two shows "Ulilang Tahanan" (MY REVIEW) and "Ang Pag-uusig." (MY REVIEW). Their acting performances here were all so exaggeratedly giddy and happy; delightful, not corny. When the characters broke the fourth wall to personally engage random members of the audience, the big surprise worked to get the viewers alert and involved. The whole play proceeded so infectiously catchy and lively, just as juvenile audiences will surely like it.