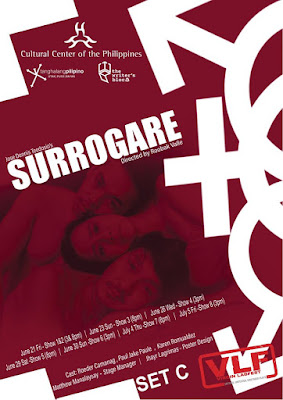 I attended a meeting earlier so I reached the CCP about 4:30 pm already. I only caught the last play of Set C, mysteriously titled "Surrogare." I missed the first two plays of the day, Anthony Kim Vergara's "A Family Reunion" and Dingdong Novenario's "The Bride and Bachelor." I did stay after the show to listen to the open forum with the artists. All three playwrights spoke very well about their plays and how they came up with them.

40-something Adam and his 20-something partner Evangelio (Eve for short) are celebrating their 7th anniversary of living together. However, that night, Adam brought his former student, former stalker Ana home with him, much to the annoyance of Eve. Adam went down on one knee to propose marriage to Eve. After that, Eve came up with a proposal which caught Adam by surprise. Then, Ana revealed why she was there in the first place.

Playwright J. Dennis Teodosio (who had been based in Myanmar since 2011) had been part of VLF from the very start, with "Geegee at Waterina" (which returned as a musical last year) part of VLF1. Heshared that the central story of this play was based on him and his partner when they were trying to adopt a child after seven years of living together. Their research about adoption laws and options led to the birth of this new one-act play. 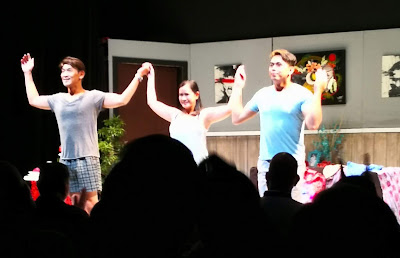 I had seen Paul Jake Paule perform in plays before (the most challenging one being Macbeth), but this turn of his as Eve was the most outrageous I've seen him in! He fluidly transitioned from flirty and flighty, to bitter and bitchy, from confidently flashy to emotional wreck. Veteran actor and singer Roeder Camanag played Adam in stark contrast to Paule's flamboyance, as a calm and mature partner. Karen Romualdez played Ana, whose character could have been fleshed out some more to explain better her offer to the couple. 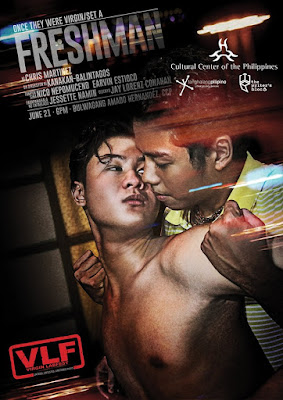 Two college freshmen from UP were studying for a critical math final exam together one night. Bonn is a basketball jock who was having trouble with his grades. So, he was asking help from Ryan, a free-spirited gay guy who gets high grades with no effort. However, when a power outage interrupted their study session, their conversations move on from Statistics to more bizarre matters.

One of the innovations in this year's VLF Staged Readings was "Once They Were Virgin" featuring the first one-act plays ever written by now well-established playwrights. "Freshmen" was the first play written by Chris Martinez, who had since gone on to great success as a writer and director in both theater and film. This was directed by no less than its original director way back in 1991, Kanakan Balintagos, who had also gained much acclaim as a director in both theater and film since then. 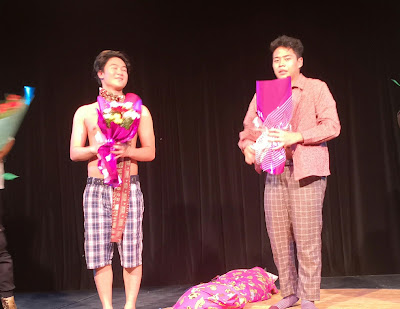 This was supposed to be a staged reading, but the two young actors actually had their lines down pat already and did not have scripts in their hands anymore. Nico Nepomuceno played straight conservative virgin Bonn, as Earvin Estioko played the liberated weirdo role of Ryan. As the play went on, I realized I had seen this one-act play staged in PETA before (MY REVIEW), directed by Chris Martinez himself. As it was before, the overall outlandish weirdness and situational illogicality of the this play still did not really sit too well with me. 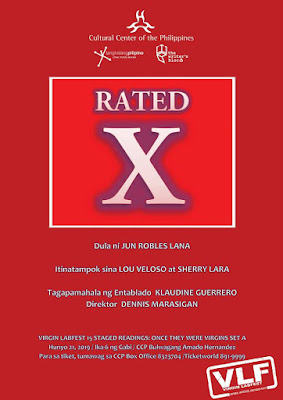 Two 70-something senior citizens were stuck in bad traffic jam. Since they did not have a driver that day, Elvira had to drive her husband of 45 years Manolo to the hospital because he seemed to be suffering a heart attack in progress. As they were waiting for the traffic to move, Elvira wistfully reminisced about their lustful younger days when sex was the best part of their marriage.

Jun Lana is recognized as a genius writer, having won 11 Palanca Awards for Literature, the youngest man to enter the Palanca Hall of Fame in 2006. He is now better known as an acclaimed film director.

Provocatively titled despite its senior cast, "Rated X" was the first one-act play ever written by Lana, but this was the first time it was ever performed in public on a stage. According to VLF festival director Tuxqz Rutaquio who introduced the play, this was supposedly banned the first time Lana tried to stage it, not really sure why.

The simple set consisted just two car seats, with a telephone (a typical landline-looking variety, haha!) in between them. The scripts were placed on stands in front of the seats, looking like the dashboard. The two actors who played Elvira and Manolo were seasoned veterans -- Sherry Lara and Lou Veloso. 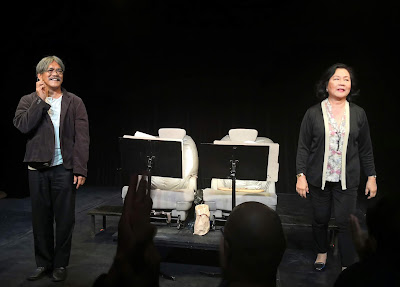 Veloso's acting was very restrained, owing to the fact that he was playing a weak man slowly succumbing to a heart attack. This situation allowed the ever-luminous Ms. Lara to shine brilliantly for all she's worth. In spite of the fact that she was just sitting down on a chair for practically the whole play, Lara's Elvira was funny, naughty, raunchy, heartbreaking, poignant, beautiful -- one of the best one-act play performances I had ever witnessed.