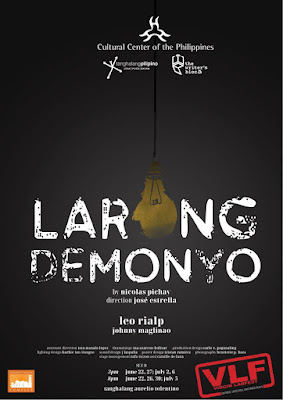 Written by: Nicolas B. Pichay
Directed by: Jose Estrella

General Videla was a notorious soldier back in Martial Law, who changed loyalties and led the military coup during the EDSA Revolution. Since then, he had retired and kept by himself in his own private island. When he turned 82, he decided he wanted to have his memoirs written to bring himself back to public attention, in an ambition to run for the presidency. A young man Efren appeared at the mansion whom the General thought was the writer he hired. Apparently, Efren had other things on his mind.

The playwright Nicolas B. Pichay is also an attorney, as well as a Palanca Hall of Famer. Unlike the other plays I had seen so far in this festival, this play was dead serious, with a palpable sinister streak of danger and violence running through it. Well, it was a Martial Law-inspired play about torture and revenge, humor had no room. There had been plenty of plays about Martial Law before, but this one had a different attack on the subject matter -- a tense conversation between two characters with a dark philosophical debate about two opposing schools of thought on how to mount and win a revolution, with a game of chess as the apt analogy. 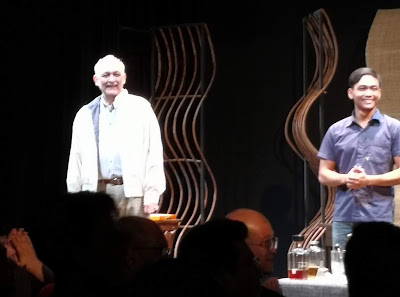 General Videla was played by veteran actor Leo Rialp in a powerful, masterful portrayal of a Martial Law monster. Even at his age, Rialp had the handsome snappy bearing of a military man. His commanding voice and intimidating presence totally dominated the stage. He sounded frightening even when he was just announcing his chess moves. The role of Efren was played by neophyte actor Johnny Maglinao, who tried his best on that stage to project confidence and bravado. Facing off with Rialp in a showdown of wits was a tall order for any new actor, Maglinao survived a baptism of fire in his first VLF. 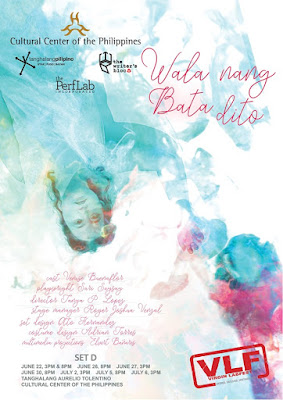 Dolor Espina was packing the clothes of her daughter who had been arrested for stabbing a soldier. Talking to herself, Dolor related and relived the events that transpired in the past months that led to that day --  how her husband Emmanuel was recruited to be an NPA member surrenderee to earn money, and how she was forced to sell her body to keep her and her daughter alive after he never came back home..

Playwright Sari Saysay worked in community theater and Dolor's situation is an amalgam of realities he had learned while working among the poor fisherfolk. His last two VLF plays, "Bus Stop" (2017) and "Ang Mga Propesyunal" (2018) all had children as the main characters. For this year, there was still a child involved but she was not seen on stage, as the play concentrated on a mother who was about to lose her child. 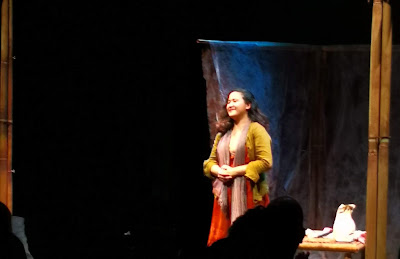 This play was a one-woman affair, with young Venise Buenaflor boldly taking on the role of Dolor. She delivered one continuous hour-long monologue, recounting all those painful experiences she went through, at first with her husband, and later with her daughter. This was a monumental task for any actor to achieve. Buenaflor pulled it off creditably but she was somewhat lacking in stage presence. Because of its length and somber mood, I think the audience may likely have had a difficult time trying to pay full attention to her complex serious soliloquy the whole time, that is if they could keep awake. 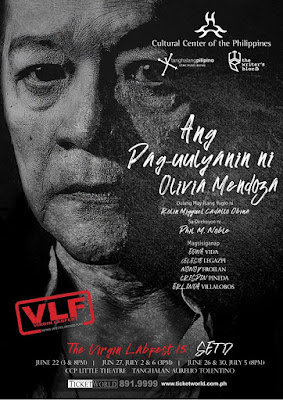 Olivia Mendoza was a 70-something old woman who had been living in a home for the aged with some other cranky old folk. However, Olivia was already suffering from Alzheimer's Disease, which was making her her drift in and out of her normal memory. One day, when Julia, a flashy old friend, suddenly paid her a visit, Olivia's painful past memories all came coming back.

Rolin Obina's script began as what seemed to be a quiet, even poignant little piece among senior citizens living together in a home. However, when the haughty and flamboyant Julia came into the scene, the whole play turned upside-down to high-stakes comedy. The title and poster made me expect a very serious play, so I was totally caught off-guard by Obina's big knockout LGBTQ plot twist, which was so insane that it was so good. The script though can feel to be too long and repetitive at times, but I believe it could still be streamlined further in future performances. 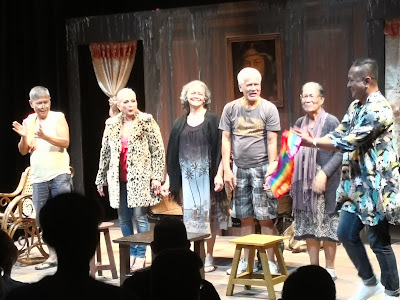 Edna Vida Froilan played Olivia Mendoza in a performance so physically and emotionally fragile, with her rich deep voice so vital in her character. Her true love Andres was played by her real-life husband Nonoy Froilan, which accounts for their romantic chemistry in their tender scenes (like how it was in "Hintayan ng Langit"). Indie film actors Erlinda Villalobos and Crispin Pineda add to the crazy mix as their cantankerous housemates, Lika and Cesar. However, they all took a back seat to Celeste Legaspi who was certainly the life of this party as Julia. Her dripping sarcasm and snooty nouveau-riche attitude was played to the hilt for maximal comic effect. This outrageous rollicking play was an easy audience favorite, its messy writing and direction notwithstanding.