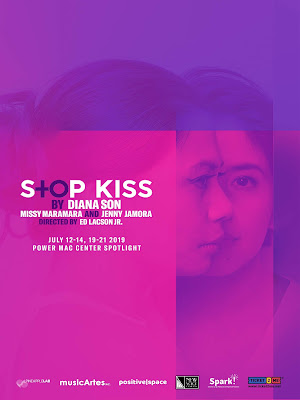 American playwright Diana Son's 1998 play "Stop Kiss" is about two women who lived in New York City. Callie is a bored cynical TV traffic reporter. Sara is an idealistic elementary school teacher in the Bronx. They became close friends after their first meeting despite their disparate personalities and backgrounds. One early morning at 4 am, they were assaulted by an unknown man on the streets of West Village. While one of them escaped with minor injuries, the other ended up comatose in the ICU.

This is not the first time "Stop Kiss" is being staged in Manila. The New Voice Company, known for its advocacy of women's issues with feminist plays like David Mamet's "Oleanna" and Eve Ensler's "The Vagina Monologues," first tackled this play in 2003. This year, new player in theater production Positive Space, in cooperation with MusicArtes, Inc. and New Voice Company, brings back "Stop Kiss" again.

In the 2003 run, Jenny Jamora played the role of Callie, while Missy Maramara played the role of Sara. This year, 16 years later, Jamora and Maramara are back in these roles once again, but each in the other's role. The way Maramara and Jamora inhabited the roles of Callie and Sara respectively this time around was so like second skin for both them, I could not imagine one in the other role at all. This switch casting was a testament to their versatility as actresses. I was wishing they would actually switch cast within this same run. 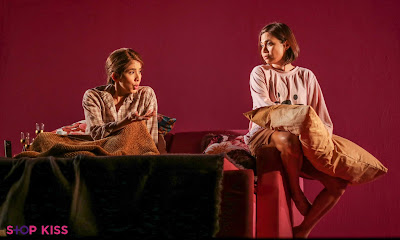 The first time I've seen Missy Maramara perform was in an emotionally-devastating one-woman show was just last year in Dulaang UP's "Ang Dalagita'y Sang Bagay na Di Buo." Since then, she was on a roll with marked roles in "The Dressing Room" and "The Kundiman Party" (both also with DUP), and "The Dresser" (with Repertory Philippines). In between, she took on the directorial chores for Blue Rep's topnotch production of "Spring Awakening" and got through it with flying colors.

As Callie, Maramara was in practically all the scenes as they switched from flashback to present day with the mere slide of a wall to delineate the change in time setting. This would necessitate Maramara to switch emotions from dark to light and back within seconds, and impressively, she was more than able to do so effortlessly it seemed. Having been a New Yorker for 11 years now, Callie was already jaded with how her life was going, until Sara came along like a bright ray of sunshine.

The first time I've seen Jenny Jamora perform was in 2005 at the now defunct Republic of Malate in the New Voice Company production of David Hare's "The Blue Room." Fast forward to the present, Jamora is one of the theater actor-directors comprising the Red Turnips, with whom she had an acclaimed stint as the director of "33 Variations." This year, she directed "Every Brilliant Thing" with Sandbox Collective" and reprised her role of the liberated Tita Mitch in "The Kundiman Party" (a role she alternated with Maramara).

As Sara, Jamora needed to project authenticity as a zealously dedicated school teacher. She was a bit on the quixotic side as she strove to break free from the comfort zone she knew her whole life in laidback St. Louis, Missouri, in order to teach (and make a difference) in a notoriously rough public school in the Bronx.  Jamora was able to bring out that sense of naivete and idealism which enamored her to Callie and to us. Delicate and vulnerable, Jamora made us care for Sara, and made us want to take care of her. 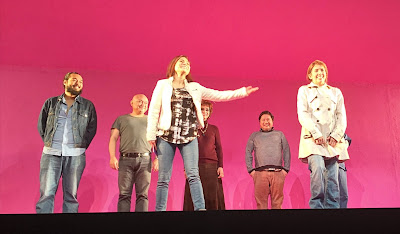 Missy Maramara and Jenny Jamora at the curtain call
El Tayech, Guveara, Glorioso and Mercado behind them

The rest of the cast played characters peripheral to the lives of Callie and Sara. Tarek El Tayech stole his scenes as George, Callie's easygoing friend with benefit. Robbie Guevara played Detective Cole assigned to investigate the assault case, while Jay Valencia-Glorioso played the excitable Mrs. Winsley, a witness to the attack. Gabe Mercado felt miscast as Sara's estranged boyfriend Peter, as I initially though he was Sara's dad. J-Mee Katanyag played a Nurse in the hospital scenes.

Ed Lacson Jr. outdid himself in this project as he took on the hats of both director and set designer. The ingenious sliding front wall Lacson devised was instrumental in his storytelling, as the scenes alternated from past to present back and forth, depicting blissful happy moments between girls in their apartment, alternating with the grim depressing post-assault scenes in the hospital. With Teresa Barrozo's subtle music score and Jethro Nibaten's enhancing light design, Lacson made these major scene transitions feel smooth and easy, like watching the story unfold on a television screen. Pacing may feel a bit long in the second act, but as a whole, this was one compelling play to watch.