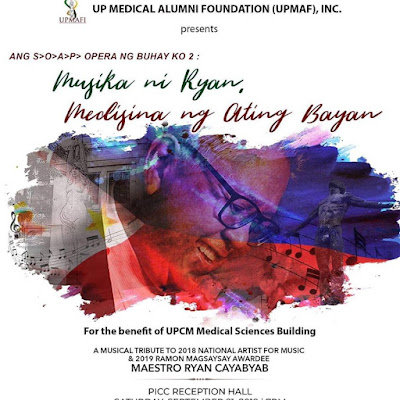 This year, Dr. Hernandez again took on the challenge for the second edition of S>O>A>P> as its Overall Chair to raise funds for the 11-storey Medical Science Building to replace the damaged old BSLR rooms where many batches of UP Med students began their journey attending lectures of Anatomy, Physiology, Biochemistry, Pathology, Pharmacology and other basic science subjects.  This second concert was held today September 21, 2019, at the Philippine International Convention Center Reception Hall. 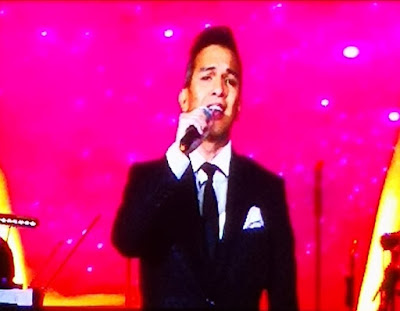 The ABS-CBN Philharmonic Orchestra returned to provide the live musical accompaniment for the concert, this time under the baton of Maestro Jonathan Velasco. The master of ceremonies was Franco Laurel who gave the introductory spiel about this event celebrating the music and songs of National Artist for Music and Ramon Magsaysay Awardee Ryan Cayabyab. He then introduced the first performer of the night -- "The Wonderful Choir" composed of members of the Ateneo Chamber Singers and the Mass Appeal Choir. They sang their choral version of "Tuwing Umuulan at Kapiling Ka." 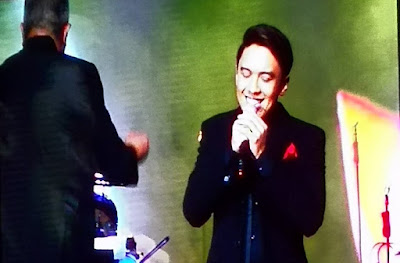 That song was just the first of a series of Ryan Cayabyab songs originally sung by Basil Valdez. The first solo performer was "Miong" himself Tim Pavino, who sang his take on "Iduyan Mo."  He then introduced the next singer, who was Kapuso star Yasmien Kurdi who sang "Tunay na Ligaya" as a duet with Franco Laurel. Laurel remained on stage to render his version of "Paraisong Parisukat." 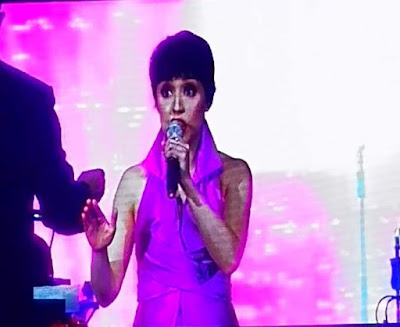 The next singer was multi-awarded theater actress Cris Villonco, who sang a theatrical version of "Limang Dipang Tao," a song which first came out in Cayabyab's ground-breaking solo a capella album "One." Villonco surprised everyone by introducing Heneral Luna himself John Arcilla as the next performer. He sang "Hindi Simple ang Buhay," (VIDEO) a song sung by Robert Arevalo in the film version of "Larawan." 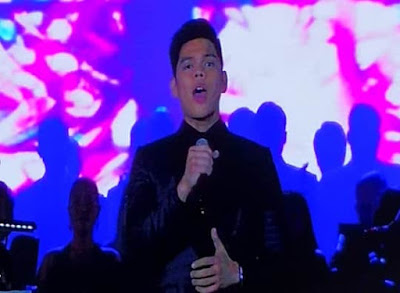 Up and coming theater leading man Arman Ferrer took the stage next and regaled the audience with his operatic tenor in the religious song "Gloria"  from Mr. C's  "Misa" (2000). He followed this up with a solid show-stopping performance of "Sometime, Somewhere," (VIDEO) bringing to heights the original by Basil Valdez never went. Even when he was still sustaining his final note, some members of the audience were already up on their feet giving him a standing ovation. 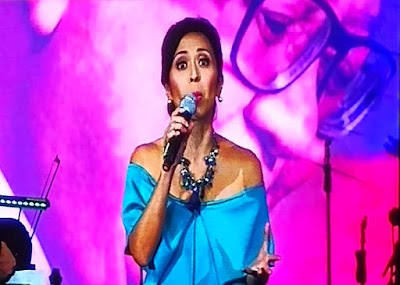 The next set of songs were from musicals written by Cayabyab. First up was "Katy!" Franco Laurel and Tim Pavino sang "Ang Entablado ay Mundo." Cris Go (daughter of a UPCM alumnus) sang "Pahiram ng Kanta." The vivacious Pinky Marquez sang the enegetic "Aba, ba, ba, Boogie." Marquez then called Rachel Alejandro out on stage to sing the popular dramatic duet "Minsan ang Minahal Mo ay Ako" (VIDEO) together with her. Alejandro stayed on to sing "Halik ng Kahapon," (VIDEO) which she originated in the musical "Alikabok."

There was a short video interlude that told the history of the UP College of Medicine and the Philippine General Hospital in rare nostalgic photographs. 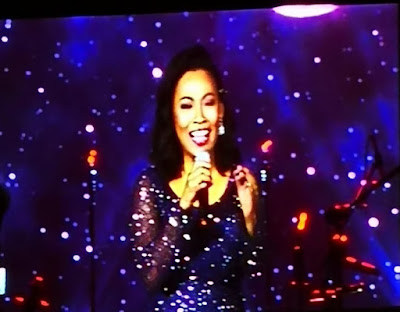 The concert continued with the jazzy female vocal trio Baihana (composed of Krina Cayabyab, Melinda Torre and Ana Achacoso-Graham) who gave an innovative spin to the song "Mamang Kutsero" (again a Ryan Cayabyab original from "One"). Pinoy R&B Soul diva Jaya came out to sing "Kahit Ika'y Panaginip Lang" (again originally by Basil Valdez). The Ryan Cayabyab Singers again revved up the energy by singing "Hibang sa Awit" in perfect harmony as they're well-known for. 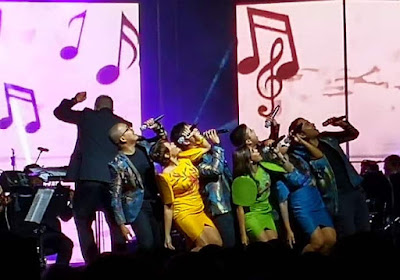 The effortless vocal gymnastics of Jed Madela was next in songs like "How Can I" (VIDEO) (originally by Martin Nievera) and "Iniibig Kita" (recorded by James Coronel in 1994, and used as the wedding march at the Alcasid-Velasquez nuptials in 2010). Madela ended his set with the Christmas song "Munting Sanggol," backed by voices of the Wonderful Choir. 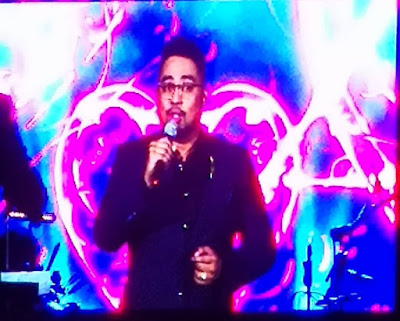 SOAP overall chair (and also chair of the Chancellor's Committee on Culture and the Arts) Dr. Melfred Hernandez took the stage to introduce a video which gave us a more intimate picture of tonight's honoree Mr. Ryan Cayabyab. The video showed Cayabyab's humility as a musician and generosity as a mentor were very impressive indeed. He also believed that the next wave of Filipino music will come from Visayas and Mindanao. 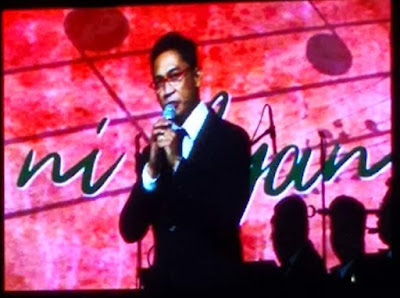 This was followed by a short video featuring UPCM Dean Dr. Charlotte Chiong, who talked about the thrusts of the UP College of Medicine -- infrastructure, science and discovery, partnership, innovation and leadership, resourcefulness and empowerment (forming the acronym INSPIRE).

The most-awaited guest singer was saved for last -- Ms. Lea Salonga began her set singing "Nais Ko" (VIDEO), originally by, you guessed it, Basil Valdez. Her next song was a Kuh Ledesma original from the musical "Rama Hari" entitled "Magbalik Ka Na Mahal" (VIDEO). She then called Mr. C up on stage to play the keyboard for her in her next song -- the Smokey Mountain love song "Kailan"  (VIDEO). Her final song was "We Win As One," (VIDEO) the stirring anthem Ryan Cayabyab wrote for the upcoming Southeast Asian Games." Lea Salonga's voice is undoubtedly a national treasure 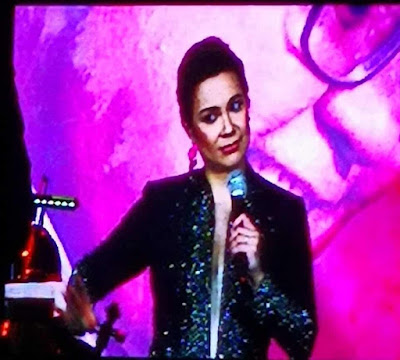 Finally, everyone in the show gathered back together on stage to sing the finale number -- "Kay Ganda ng Ating Musika" -- the song that first put Ryan Cayabyab on the road to his now legendary musical career and life. The song always perfectly summed up the beauty of original Filipino music that Mr. C always espoused throughout his life. They sang two more songs after that -- a patriotic song "O Bayan Ko" (VIDEO) and a Christmas song "Kumukutikutitap" before calling it a musical night to remember.

Congratulations to Dr. Melfred Hernandez, his team, all the organizers and the performers for a successful benefit show! Looking forward to seeing the new Medical Sciences Building at my alma mater soonest.