Review of DUP's THE HOUSE OF BERNARDA ALBA: Overarching Oppression 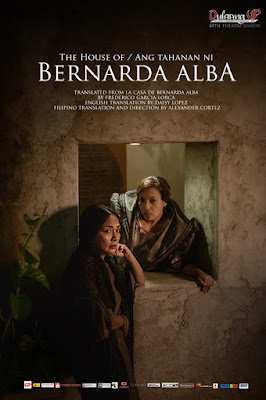 "The House of Bernarda Alba" was play written in 1936. It was the last play by acclaimed Spanish poet and playwright Federico Garcia Lorca. Just two months after it was written, Lorca himself would be a victim during the oppressive Spanish Civil War, as his body disappeared without a trace.

Dulaang UP has chosen this play about oppression as its opening show for its 44th season themed "Daluhong" (or "Assault"). The English translation I watched yesterday was done by Daisy Lopez. There is also a Filipino translation done by former DUP artistic director Alexander C. Cortez, who is also the director of this production.

The second husband of 60 year-old Bernarda Alba had just passed away. Ever the demanding matriarch, Bernarda ordered her five daughters aged 39 to 20 to confine themselves to their house for the next eight years, and do nothing else but tend to their sewing. Because of this oppressive atmosphere, the seeds of rebellion were sown among the sisters. However, when sibling rivalry arose because of a man, the pressures reach an explosive boiling point right inside their house.

The eldest daughter was Angustia, Bernarda's daughter from her first husband. Because she had an inheritance from her departed father, Angustia had money on her own. However, all the daughters from the second husband were receiving practically nothing from their recently departed father. This made Angustia feel superior over her half-sisters, hence the conflict that existed among them.

Tensions among the sisters rose further when Angustia got engaged to be married to a very eligible bachelor, Pepe El Romano. Unfortunately, this dashing young man also fanned obsessive desire among the two youngest sisters, Martirio and Adela. The beginnings of this dangerous rivalry had long been noticed by the observant head servant Poncia, who did not hesitate to express her concerns to Bernarda, but to no avail.

Frances Makil-Ignacio seems born to play tough domineering women like Bernarda. In practically all the plays I saw her in, she wore the pants and had the last say. Sarina Sasaki really projected mousy and bespectacled Martirio's unbridled jealousy. Maxine Ignacio was rabidly crazy in love as Adela. Stella Canete-Mendoza was riveting as the frankly intrusive majordoma Poncia, a wicked presence and performance that drew attention to her.

For the other members of the cast, they were Liway Gabo (who could have been more self-centered as Angustias), Iris Montesclaros (as sleep-deprived Magdalena), Mikaella Coruña (as lesbian-ish Amelia), Lei Ann Quinquillera (as Servant), Bea Racoma (as the family friend Prudencia) and the ever-flamboyant Rica Nepomuceno (as the demented grandmother Maria Josefa). Marga Luge, Marjeorie Peleño, Ana Lumain, Jeremy Cabansag, and Ani Africa complete the ensemble.

For the Filipino shows, Bernarda Alba was played by Gigi Escalante. The rest of the cast are: Sheryl Ceasico (Poncia), Ronnie Martinez (Maria Josefa), Opaline Santos (Angustias), Gel Basa (Magdelena), Camille Abaya (as Amelia) and Jacqui Amper (Servant). Sarina Sasaki, Maxine Ignacio and Bea Racoma play Martirio, Adela and Prudencia respectively in both versions. Hearing how the English lines were written, I feel the impact would sound stronger in the Filipino version. I hope I can still get to see that. 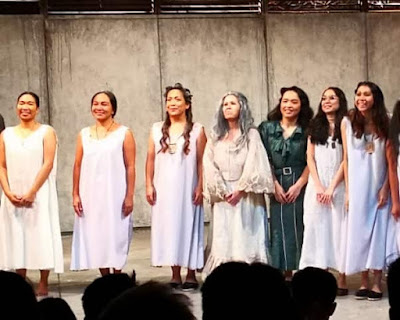 Under the unifying vision of Alexander C. Cortez, Gino Gonzales created an open space center stage, with the dusty religious iconography occupying a second tier on the drab back walls overlooking the action, adding to the confined claustrophobic feel of the stage. D. Cortezano's lighting design mainly created drama by light beams shining through wooden jalousies right under the ceiling all around the house. The music of Katz Jakosalem Trangco was mostly quiet and unobstrusive, but just adequate to build and keep the mood. The sound design of Jethro Joaquin was essential here to establish the townspeople, the horses and all the other things which were happening off stage.


This play was populated only by women characters, some strong over-the-top types at that. Names of male characters mentioned but we never see them on stage. This was a play about women of different ages, but written by a man. I wonder how women would view this type of play where a male playwright assumes he knew what thoughts and emotions lay inside a woman's mind when it comes to their relationships with their mothers, daughters, sisters or the men they loved. Poncia's sarcastic line about bitter unmarried women was particularly memorable in a caustic way. Nevertheless, for all its heady, stifling estrogenic melodrama, the cautionary message against the tragic consequences of oppressive authority in general is delivered clearly.