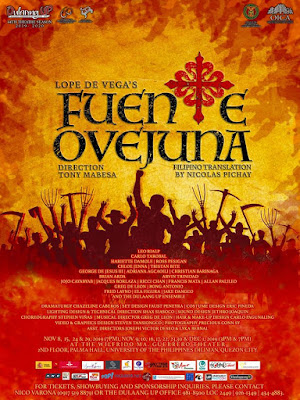 For its second offering in its current 44th theater season, Dulaang UP chose to present Spanish playwright Lope de Vega's 1619 play "Fuente Ovejuna," in keeping with the theme of this season is "Daluhong" which means "assault." The play was based on an actual historical event -- the 1476 uprising of peasants in a Castillan village against their cruel commander. It was Comedia produced in the Golden Age of Spanish Drama.

The Comendador of the Order of Calatrava, Fernan Gomez de Guzman was welcomed with gifts upon his arrival at Fuente Ovejuna from his victory at Ciudad Real. However, the Comendador was a cruel master to the peasants of the village -- torturing men and raping women. He particularly desired the fair maiden Laurencia and was about to molest her, but was stopped in time at crossbow's point by her suitor Frondoso. Shamed, the Comendador vowed to get his revenge.

The Filipino translation which I watched was written by Nicolas Pichay. The language used was ornate and appropriate to its period. However, the language remained to be engaging, easy to follow and enjoyable to listen to. The words slipped off the actors' tongues with ease and we as audience felt ease that as well. There was a light-hearted and even amusing lilt to the tone of the whole play, despite all the violence of the proceedings. Even if the mood did take a more serious turn after the intermission, the chosen words of Pichay remained musical to the ears. 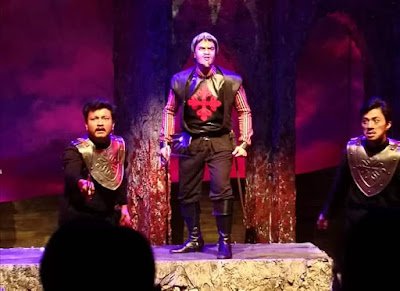 In the show I watched, the fearsome Comendador Fernan Gomez de Guzman (yes, they always read out his whole name when they referred to him) was played by Carlo Tarobal, whom I first knew as one of the award-winning team of writers of one of my favorite films last year "Tanabata's Wife." He is tall, of smart stature and had the strong stage presence that his role demanded. His dark eye make-up made sure we knew he was up to no good. (His alternate for this role is Leo Rialp, and by reputation we know how much intensity he can bring to this anti-hero role.) His vile henchmen, namely the vulgar Ortuno and the sneaky Flores, were played by Arvin Trinidad and Brian Arda. (Alternates are Aaron Comandante and George Magsayo.) 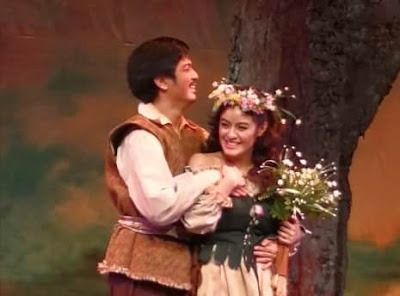 Harriette Damole and Ross Pesigan were naturals at playing the romantic leads Laurencia and Frondoso. Even if they had all those long lines, everything seemed so effortless for these two attractive actors, and their chemistry together easily elicited a sense of thrill. (The alternates in these roles were Chloe Jenna and Tristan Bite, who were also onstage when I watched as their close friends Pascuala and Barrildo.) An easy scene-stealer and hilarious comic relief was the character of Mengo played by the inimitable Dolly Dolot. (His alternate is Ricci Chan, who promises to be a sure riot in this role as well.) 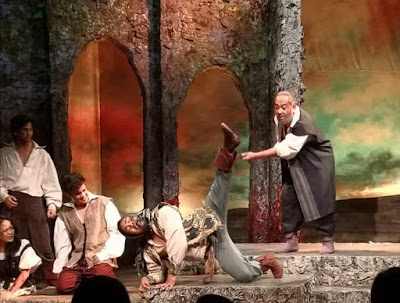 The elders of Fuente Ovejuna were the mayor Esteban (who was Laurencia's father), his friend Alonso and Juan Rojo (who was Frondoso's father). They were played by Jojo Cayabyab (in yet another powerful performance as he gave in Marat/Sade last summer), Jacques Borlaza (a Best Actor nominee for last year's revival of "Ang Paglilitis kay Mang Serapio") and Allan Palileo (actor, writer and translator of several DUP plays), respectively.

King Fernando and Queen Isabel were played by George de Jesus III and Adriana Agcaoili. Beyond their richly opulent emerald costumes, de Jesus and Agcaoili bring to their roles an elegant gentility and depth of wisdom expected from reigning monarchs. (Alternating as the King is Greg de Leon, who also played Don Manrique, the trusted general of the royals.) 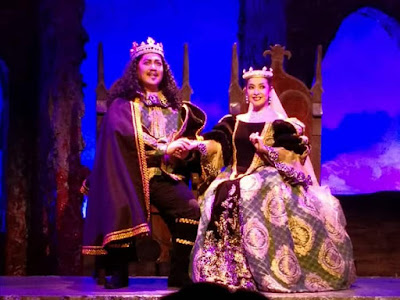 Taking his final bow as director with this play is the beloved Prof. Emeritus Tony Mabesa, who passed away last October 4, 2019. However before being brought to the hospital, he had already been able to finish blocking all the scenes and discussed all the technical aspects of this play with his crew (Shax Siasoco for lights, Faust Peneyra for set, Jethro Joaquin for sound, Eric Pineda for costumes, Greg de Leon and Raymond Roldan for music, Steven Tansiongco for graphics and Stephen Vinas for choreography).

Current DUP Artistic Director Banaue Miclat-Jannsen took over after his passing to piece all the elements together based on their collective experience of being under Mr. Mabesa's mentorship over the years. This production may be our final taste of Mr. Mabesa's skill and standards in bringing a script to life, but his students will make sure his legacy will continue to live through DUP shows of the future. 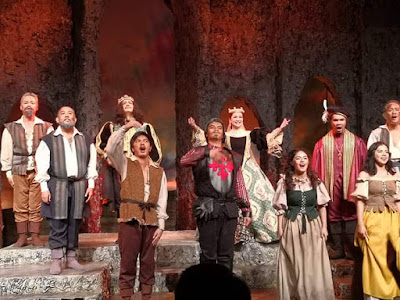