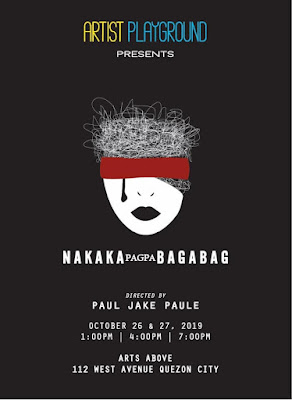 Artist Playground had Grade 12 students under their wing from the College of the Holy Spirit who chose the Arts and Design track for their senior high school. Instead of merely asking the kids to just stay on the side to observe how theater people stage a play, AP immersed them in an actual project where they were hands-on in all parts of the production crew. This anthology of three original Filipino one-act plays was their major project for this semester. All three plays were directed by Paul Jake Paule. In between each play, a song composed by Andrew Caleb Gorospe was performed by Melvin Sumalinog.

Ernesto and Magda grew up together in the province. Ernesto obviously had a crush on pretty Magda, but her dream was to leave and go to Manila to try her luck. Years later, Ernesto is seen to look for Magda in Manila, and the two meet quite by chance on the street as she was coming out of her place of work. Her sexy outfit betrayed her current line of work, but blinded by love, Ernesto offered her marriage. 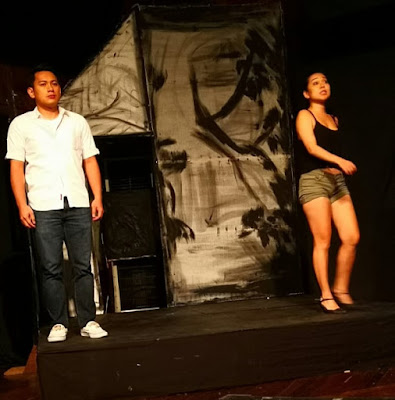 A scene from "Itim na Sampaguita"

According to her playbill notes, writer Malicdem wrote this play as one of the requirements of her theater writing class. They were supposed to write a play based on a Gloc 9 song, and she chose to adapt Gloc 9's 2013 single featuring Rico Blanco entitled "Magda." In the final scenes of the play, Gloc 9's rap lyrics recounting the contents of Magda's letter to Ernesto were delivered practically verbatim by Magda in her final soliloquy. However, Malicdem upped the tragedy quotient of the song by adding two major details in her play -- what made Magda go to Manila, and her response of Ernesto's proposal. 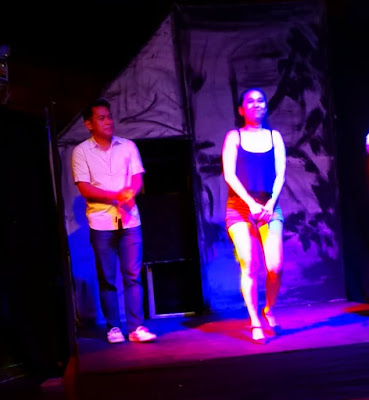 Mondejar and Sasaki take their bows

This one-act play was a short two-hander with a story that spanned several years within its limited run time. Sarina Sasaki, fresh from her recent stint in Dulaang UP's "The House of Bernarda Alba," was able to show the maturity and cynicism of her character effectively, and this was not only because of her new look. You feel the desperation which pushed her to do what she felt she had to do in the end. Karl Mondejar played her "Kuya" Ernesto. This was less showier role, but Mondejar played it with simplicity. sincerity and earnestness.

A man named Jo jumped to his death in an apparent suicide. His friend, Woman at Home, could not understand what made Jo do it. She contacted their common friend, Woman at the Door, who was also receiving treatment for psychoses issues of her own. She brought along a Concerned Friend with a more cynical view of life. The three of them struggle to regain control of the situation as they try to make sense of Jo's act. Finally, Jo has his own cautionary message from beyond the grave. 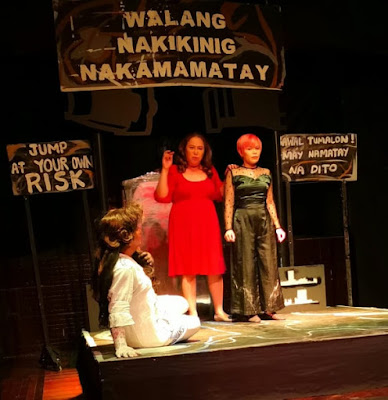 A scene from "On Wednesday"

Mental health is very much in the news as suicides are on the rise, with several successful celebrities among the names in the list. Since 2016, suicides passed homicide to become the second-leading cause of death among teenagers in the United States. According to more recent WHO statistics, suicide is the second leading cause of death among young people from 15 to 29 years worldwide. It is truly disturbing that one person somewhere around the world dies from suicide every 40 seconds. 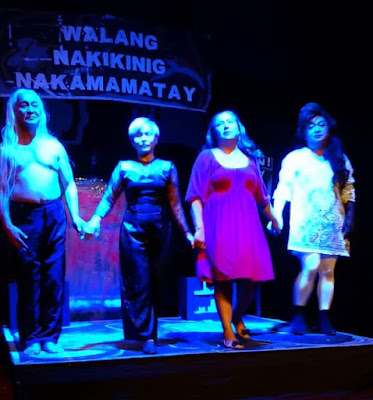 This one-act play shows the aftermath of a suicide among the friends left behind -- how much confusion, how much guilt, how much turmoil. Played by veteran character actors, Kathy Arguelles (as Woman at Home) and Mosang (as Woman at the Door), they wonder and argue how they could have missed the signs of Jo's escalating depression. Concerned Friend, with his condescending tone and laughter, was a disconcerting character as played by Marco Calilao in full drag. As the suicide victim Jo, Francis Ronnie Martinez was a haunting vision under the stage lights with his waist-long white hair and lined visage.

Young Man is a student from the university who joined an activist organization. His professor could not dissuade him from joining a rally. The rally turned violent as Young Man shot one abusive police captain in the head. He was arrested. After a short but tearful visit from his father, the Young Man was subjected by his two captors to unspeakable torture as he discovered more about the man he killed. 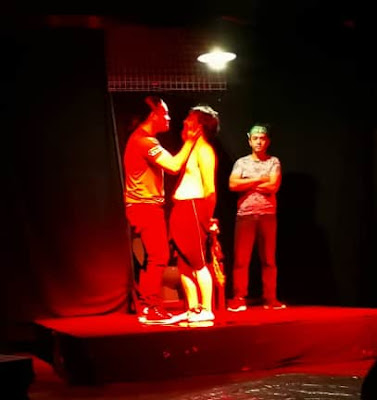 A scene from "Juan Bautista"

The subject matter of police brutality against student activists is an oft-revisited topic in local socially-conscious theater groups. There is so much intense drama which could be mined out of confrontations between these two classic adversaries, as it was in "Juan Bautista." The title was a reference to John the Baptist, the voice in the wilderness paving the way for the coming of the Savior. The Young Man sought to pave the way for reform and justice in the country, but his violent means clashed with established government. 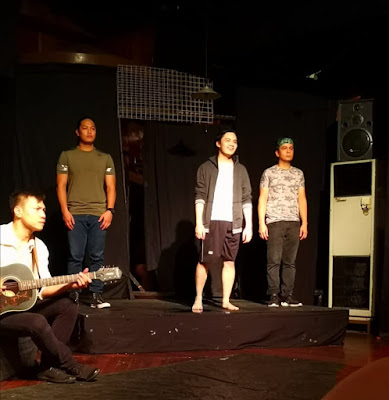 Carpio, Dioquino and Memo take their bows,
with Sumalinog on his guitar

This play won the second prize in the One-Act play category of the Palanca Awards back in 1992. The Young Man was played by Aaron Dioquino with youthful idealism and fanatical dedication. His two co-actors served as narrators and played multiple roles around him. Jeff Carpio played his elderly professor, as well as a strapping sergeant with a major chip on his shoulder. Chad Memo played his anguished father, as well as another heartless torturer. It is always a painful experience to watch torture on stage, especially in an intimate venue.

"Nakakapagpabagabag" has a limited run of 6 performances from October 26-27, 2019 at Arts Above at the Penthouse of the BIR Building along West Avenue, Quezon City. Showtimes are at 1 pm, 4 pm and 7 pm. Ticket prices at P800 for VIP Seats (front and elevated back), P600 for Regular Seats (in between) and P300 for Students.