Review of Blue Rep's NEXT TO NORMAL: Breakable Bipolarism 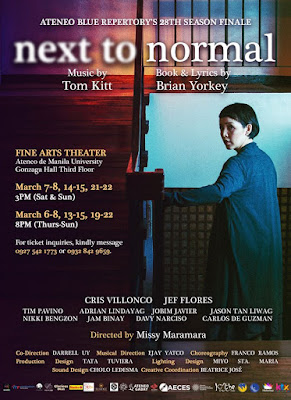 Diana Goodman was a very stressed out housewife. Her husband Dan was very concerned for Diana's fragile psyche, as she juggled several psychotherapeutic drugs. Diana seemed very closely attached to her clingy eldest son Gabe, who was determined to be her center of attention. However, she was emotionally distant from her rebellious daughter Natalie, who was turning to drugs herself. When Diana's delicate psychiatric condition took a turn for the worse, her new doctor Dr. Madden recommended electro-convulsive therapy with all its attendant risks to her memory. 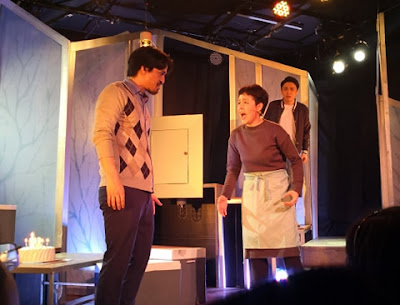 Dan and Diana argue as Gabe looked on

The Fine Arts Theater on the third floor of the Gonzaga Building in the Ateneo de Manila University campus was a very intimate space. This is very surprising because the stage of the Booth Theater was huge as well as the multi-tiered metallic set for the Goodman house. I already considered the set for the Atlantis production staged at the Carlos P. Romulo Auditorium to be a significant downscaling of the set. Now seeing this very small stage right in front of me, I felt this was going to be a very different viewing experience, and it was.

The story being told gained a different point of view the very intimate way this musical was staged this time around. The simplicity of the set directed all the attention to the actors. The actors were so up close to the audience, we can see the sweat on the brow and the tears on their faces. The songs, especially "I'm the One" and "Song of Forgetting," seemed to have gained so much more angst and power when I can clearly see the actors' every facial expression while singing them in a setting like this. Yorkey's deep and witty words were heard loud and clear. 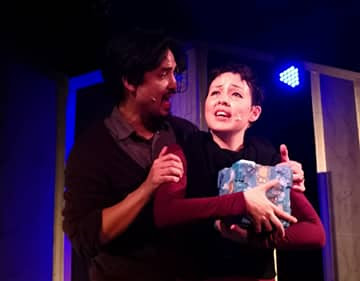 Dan and Diana in an intense scene

Cris Villonco and Jef Flores may initially seem too young to pull off the roles of Diana and Dan. However, it soon became evident that being younger made their Diana and Dan all the more vulnerable to the extreme stress of parenthood that they crumbled under. Villonco had a delicate physicality which made her Diana so precarious. Her vocals were given quite a strenuous workout in driving rock songs like "The Break," but they remained crystal clear and pitch perfect the whole time. Flores gave his Dan a fragile edge himself which I did not see in previous incarnations of the role, so evident in that final duet of him with Gabe.

Tim Pavino was very earnest as Gabe, a son who had an unhealthy connection with his mother. The revelation scene about Diana's problem with Gabe still packed a punch even if I am watching this for the third time. Pavino's soaring vocals were pushed to extremes with the range of his song "I'm Alive." (Adrian Lindayag alternates as Gabe.) 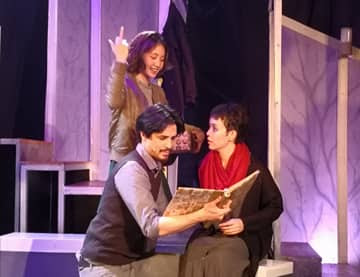 Jobim Javier made a big splash in the theater world in 2018 with his star-making performance as Butch in "Eto Na! Musikal nAPO," which eventually won him the Gawad Buhay award as Best Actor in a Musical for that year. Here however, his weaker singing vocals as Dr. Madden and Dr. Fine tended to be drowned out in group numbers under the superior and better projected vocals of his co-stars. (Jason Tan Liwag alternates in these two doctor roles.) 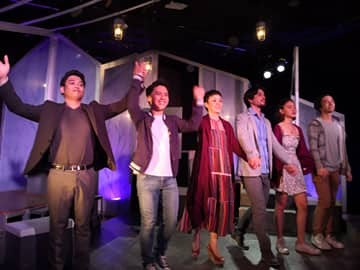 Director Missy Maramara overcame the severe venue and budget constraints and successfully used these limitations to bring out to the fore the play's innermost powerful emotions. Despite the fact that this was already my third time to watch the show, this one was so stripped down that hit me in a whole different impact, with the intensity of its raw display of heart and soul by the lead actors. Thanks to the musical direction of Ejay Yatco, the original Broadway soundtrack (on Spotify) sounded so sterile in comparison. Emotions here are so frayed, a debriefing is in order after the show.

Blue Rep's NEXT TO NORMAL runs from March 6 to 22, 2020 at the Fine Arts Theater, 3rd floor of Gonzaga Building, ADMU, QC. Show times are at 3 pm on Saturdays and Sundays, and 8 pm from Thursdays to Sundays. Ticket prices at P530 (Gold), P430 (Silver) and P380 (Bronze-SRO). So far, a check of the KTX website (LINK) showed that all show dates are already sold out! Stand by for any announcement of additional dates.