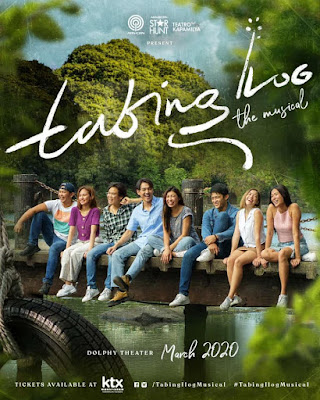 The original "Tabing Ilog" was a popular teen-oriented tv series on ABS-CBN that ran from four years, from 1999 to 2003. This show, most probably inspired by its American contemporary "Dawson Creek," was the springboard for several currently well-known actors, such John Lloyd Cruz, Patrick Garcia, Baron Geisler, Paolo Contis, Kaye Abad, Desiree del Valle, and Jodi Sta. Maria. I disclose that I never saw a single episode of this show.

This year, for its maiden foray into the theater scene, ABS-CBN's Kapamilya Theater decided to translate this series (and its typical array of teen-related problems) into a full-length stage musical. They definitely wanted to get things right their first time out by getting the services of multi-awarded artists to create this piece, namely Vincent de Jesus (for music and lyrics), Jade Castro (for book) and Topper Fabregas (as director).

The story opened with a gathering of friends at their favorite hangout spot under a tree beside a river. As usual, it was James (PBB's Jem Macatuno) who led in texting everyone to come. Rovic (Ian Pangilinan) came with his girlfriend Eds (PBB's Kiara Takahashi). Fonzy (PBB's Argel Saycon) came with his sister Corrine (PBB's Lou Yanong). Badong (PBB's Batit Espiritu) came with his trusty sidecar. Their special guest that day was George (Miah Canton), their gangmate who went to the States, now here on vacation.

These character names were the original character names from the TV series. James was Patrick Garcia. Rovic was John Lloyd Cruz. Eds was Kaye Abad. Fonzy was Baron Geisler. Corrine was Desiree del Valle. Badong was Paolo Contis. George was Jodie Sta. Maria. Of course, these names alone would give the currently millennial fans of the original series a serious case of throwback nostalgia back to their teenage years. Along with that, there were also memory-triggering props, like the bicycles and the tree with a swing made from an old tire. 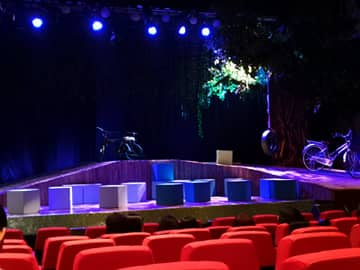 The play lasted for two hours, with a 15 minute intermission. The main story dwelt on how the gang dynamics were severely altered after Rovic and Eds broke up on account of a Fil-Am interloper named Jerry (Justine Narciso), George's best friend from New York who came home with her. The second act would deal with some social activism, when their beloved riverside spot was threatened by the planned building of a dam in their area.

In between were little anecdotal side-stories about moving out, speaking up, alcoholism, mental health, platonic friendships, LGBT issues, and the graduation ball. This caused the story telling to be episodic, thus making the flow of the story erratic. The scene about Fonzy getting injured was puzzling because it was not clear what he was doing and why. There was a gay character Ely (Franco Ramos) to make a point that calling them "bakla" was okay as long as it was not said in an insulting way. James' kid sister Sammy (MNL 48’s Brei Binuya) was given her own song to sing to represent the "future generation".

Among the young actors in the cast I watched, the best singer of them all was Miah Canton. You can clearly hear the difference between a classically-trained voice (like Canton's) and someone who can just sing (the rest). Tough as it may sound, everyone's singing (except for Canton) were of inconsistent quality, to put it mildly. Some teetered precariously on the edge of the correct tune and a few actually veered off-key, to the misfortune of De Jesus' songs. The group dancing could have had better coordination and timing. Their acting performances frequently came off as quite self-conscious. These issues are nothing that more intensive training in voice, dance and acting cannot fix, if they seriously want to pursue stagecraft.

I saw the list of alternates per role and saw a number of proven stage singers among them, like Gab Pangilinan (for Eds), Teetin Villanueva (for Corrine), Krystal Kane (for Jerry) and Noel Comia Jr. (for Sammy). The other alternates were mostly graduates of PBB, like Abi Kassem (for Eds), Sky Quizon and Hanie Jarrar (for Rovic), Emjay Savilla (for Badong), Gian Wang and Gabby Sarmiento (for James), Shawntel Cruz (for Jerry), Art Guma (for Ely) and Lie Reposposa (for Sammy). There were MNL 48 members, like Abby Trinidad and Belle de los Santos (both for George). The alternates for Fonzy are theater actor Vino Mabalot and Star Hunt alumnus Elyson de Dios.

The various adult characters involved in the teens' stories were played by two seasoned senior actors. On the show I watched, the characters of Rovic's grandmother, Eds' mother, and the school teacher in charge of the grad ball were all played by Joann Co. (Her alternate in these roles is Agot Isidro.) The characters of Eds' father, the school principal, and Eds' gay fashion designer boss in Rizal was played by Jojit Lorenzo. (His alternate in these roles is Paolo O'Hara.) Their extensive stage experience in singing and acting was definitely apparent vis a vis the younger actors. 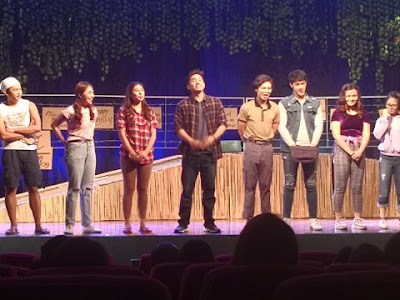 
Overall, the script could use some streamlining or the direction more tightening, to get the story flowing more smoothly. Better yet, some more interesting plot points could maybe be developed to generate more excitement in the story. Another teenage love triangle was not exactly novel nor compelling. They sneaked in the name of Anne (that was Paula Peralejo's character in the TV series) at one point, but they never mentioned her again before the show ended. While this show can still be entertaining especially for the fans, I'd say there is still much room for improvement for it in future stagings.

TABING ILOG runs from March 7- April 26, 2020, at the Dolphy Theater, Sgt. Esguerra Ave, Diliman, Quezon City, Metro Manila. Access to the theater is via the Audience Entrance. Show times are at 8 pm from Thursdays to Sundays, and 3 pm matinees on Saturday and Sundays. Ticket prices range from P2,500 (VIP), P1,500 (Orchestra Side), P1,200 (Balcony Center) and P1,000 (Balcony Side).