Review of Artist Playground's THE RIDDLE OF THE SPHINX: Short But Savvy 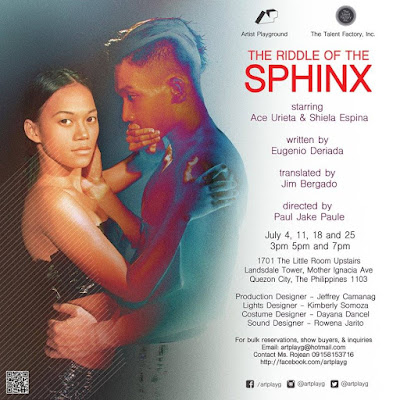 When I received the invitation to go see "The Riddle of the Sphinx", I noted that the company was not familiar to me and the actors nor the director were not familiar to me. The venue itself was not a formal theater, but the address indicated a condo. However, when I read further to see Roeder Camanag's name involved in the project, I decided this would be worth checking out.

Looking for the venue was not too easy. I knew Mother Ignacia Ave. and St. Paul the Apostle Church. Landsdale Tower was supposed to be across the church. I missed it the first time I passed by. On more careful looking on my second round, I saw it. Landsdale Tower is an old-looking building painted dark mossy green. There was no poster about the play in the lobby, but the guard at the info desk was aware about it and that reassured me.

After registering at the guard, I went up to the 17th floor, and looked for 1701. Again there was no poster outside the door, so I just knocked and looked inside. It was dark inside with red lights. I was met warmly by the fledgling company's artistic director, veteran performer Mr. Roeder Camanag himself, and his friendliness put me at ease. There was a small performance space and three-tiered bleacher benches which would fit only around 15 people or so.

The performance area had a couple of stepladders. Two actors, a man and a woman, who were only in black underwear, were seated on the floor under the ladders. A voiceover solemnly intoned William Shakespeare's words in Act II, Scene VII of "As You Like It" -- "All the world's a stage..." The actors did interpretative movements on and around the ladders, with only an occasional grunt and moan to be heard from them. 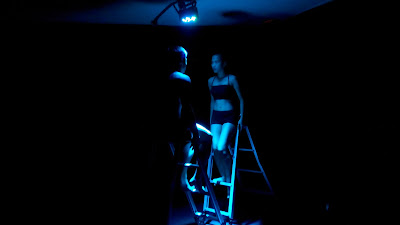 At the end of the poem, the red lights were turned off and the actors donned their clothes. Observed that the man took a little longer to dress up than the lady. When they were ready, the lights came back on and the play proper began. A girl was waiting for a bus to come. A boy joins her to wait for his own bus. They strike up an animated conversation that begins with getting to know each other, getting married, having kids, growing older and finally ending with someone dying. The whole presentation was only about 30 minutes long.

So that was what the title meant. "The Riddle of Sphinx" refers to the Greek myth where the Sphinx was a monster who killed those who could not answer its riddle which went: "What is the creature that walks on four legs in the morning, two legs at noon and three in the evening?" Only Oedipus answered correctly,"Man." Though it did skip infancy and childhood, this play summarized the life events that happen between a typical man and woman. 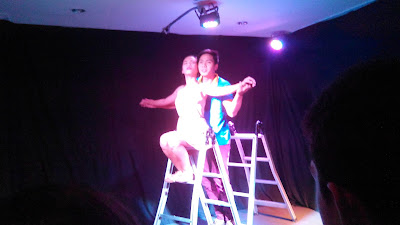 This performance piece for two was originally written in English sometime in the 1980s by Ilonggo writer Eugenio Deriada. It was translated into Filipino by Jim Bergado. In its synopsis, "The Riddle of the Sphinx" was about two strangers exploring the "relationship dynamics of a man and a woman through a game they played" while waiting for their bus to arrive. It is a piece that fit right down the alley of Artist Playground, with its aim to be a laboratory for experimental works of art. This show was directed by Paul Jake Paule.

That afternoon I watched, the roles of the Young Woman and the Young Man were both played by senior college students majoring in Theater Arts from the Pamantasan ng Lungsod ng Valenzuela. They were Shiela Espina and Jerome Rosalin. Their curriculum vitae are not lengthy, so they are still really very new actors. However, they did very well considering the difficult demands of their roles with their sincere, raw and natural performances. In other performance dates, the role of the Young Man would be played by a more experienced actor, Ace Urieta. 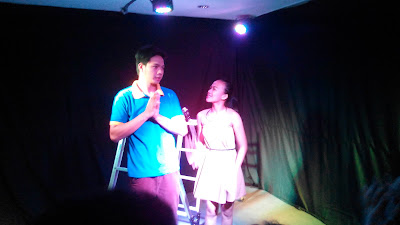 It is a challenge for any pair of actors to perform this piece because of the strong chemistry it demands between them. The very intimate venue in 1701 The Little Room Upstairs also does not give them any leeway to hide any mistakes. Every little thing they do can be seen. On the other hand, the audience also may feel uncomfortable sitting so proximate to the actors, seeing everything they do in close up, and probably vice versa. This is indeed a very unique theater experience, for both the actors as well as the audience.

If you are interested to watch this type of experimental performance piece, you can call the number of Artist Playground at 09158153716 for inquiries on ticket prices. Look for Ms. Rojean. "The Riddle of the Sphinx" will run for two more Saturdays, with performances scheduled at 3 pm, 5 pm and 7 pm. 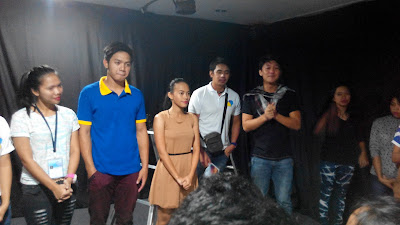 Rosalin and Espina, along with Director Paul Jake Paule (in white), AP Artistic Director Roeder Camanag (in black) and other crew members take their bow.

Upcoming Artist Playground projects at 1701 The Little Room Upstairs in the coming months include: “Tag-ani” by Amelia Lapeña-Bonifacio (Aug. 22-23, 29-30) and “We Hear But Do We Actually Listen?” a one-woman show by Angelina Kanapi (September). Aside from theater, AP also supports the visual arts with “Jaded-Miniature Series,” a solo mixmedia exhibit by AP board member Nasser Lubay in November.

A project that first originated and explored in 1701 is already going to be seen at the CCP. “Ginugunita Kita,” a concert featuring the poetry of Maningning Miclat and the music of AP co-founder Jesse Lucas, will be performed at the Little Theater of the CCP on Sept. 3, 7 p.m. This show had also been successfully performed in Aldaba Hall in UP Diliman last May.