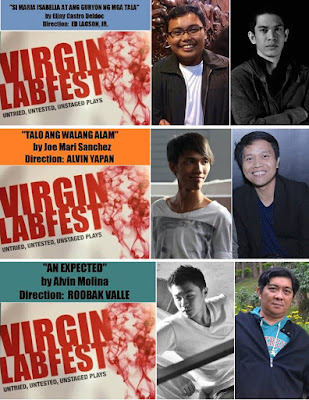 Last week at a press preview of another show, I overheard a man behind me saying that he had already watched all 12 new plays in the current Virgin Labfest. According to him, the best set of all is Set D. He and others I saw on social media were all praises for one particular play in Set D, "Si Maria Isabella at ang Guryon ng mga Tala". Honestly, I actually had no more plans to watch any other VLF set this week. However, because of these rave reviews, I felt I should make a special trip (typhoon signals notwithstanding) just to catch that one very special play everyone is talking about. 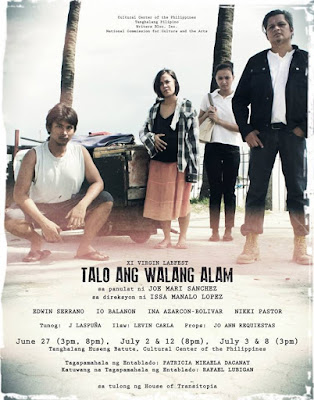 Set in a seedy area along the sea wall of Manila Bay on Roxas Boulevard, a pregnant homeless woman named Myrna lived in her cart, gathering junk to sell. Her husband is in jail. Her brother-in-law Ramon is a drug pusher under the payroll of a bad cop.

A woman named Grace had her precious handbag with all her money snatched by thieves. Grace was forced to help Myrna give birth, but will Grace get her money back?

Ina Azarcon-Bolivar and Io Balanon were made up so dirty, disheveled and destitute as Myrna and Ramon, making them look like real street people. Azarcon-Bolivar's raw childbirth scene was definitely a highlight. Edwin Serrano was so sinister as a corrupt cop. Nikki Pastor was convincing as a poor waitress who just lost her life savings.

Everything in this play was as grimy and as dirty as the stage with all the trash strewn all over it. The actors in this play were very realistic so that the whole play felt uncomfortable to watch. We are brought into the underbelly of the city we do not want to see. We are forced to face the dregs of our society, whose existence we would rather ignore. This is one painfully frank script by Jom Sanchez (the first script he ever submitted to a competition) we would expect to see as an indie movie. Staging it as a play gave it a more visceral punch especially with the heavy musical score and dramatic light direction. 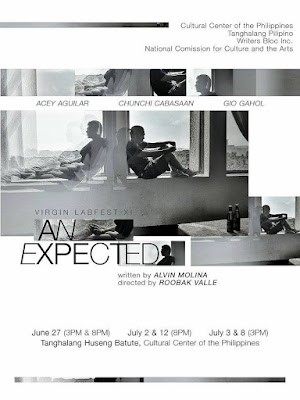 Set in bench inside an amusement park, a gay couple Jake and Victor were discussing about their relationship. Since he never had a girlfriend before, Victor seemed to be having doubts whether he may be straight or not. As their argument reaches an impasse, a gregarious fairy with a blonde braid named Mathilda appears, offering her one last wish that she can grant to either one of them. Jake yields the wish to Victor. What will Victor wish for? Will it really come to pass?

Gio Gahol and Acey Aguilar were very good as Jake and Victor respectively. The girls in the audience were all a-titter with giggles because of all the cheesy romantic lines the two dashing guys were throwing at each other. Perhaps these ladies wish Victor will choose them to be the girlfriend who will turn him straight, I don't know.  Initially, I thought the Fairy would be a corny character based on the photo in the playbill. But Chunchi Cabasaan played her smart and hilarious. The way she burst into song at one point, it was obvious he watched the Idina Menzel concert. Haha!

This was a smartly-written and very witty script by Alvin Molina, very entertaining. There are some things I do not really understand though. I do not know what the title meant in relation to the story of play. I am not really sure why an amusement park was chosen as a setting. I am guessing it is for the sense of wonder and whimsy? I honestly did not understand what the whole epilogue part really meant. Was that about how the wish was fulfilled? Was it a flashback to or a reboot of the past? 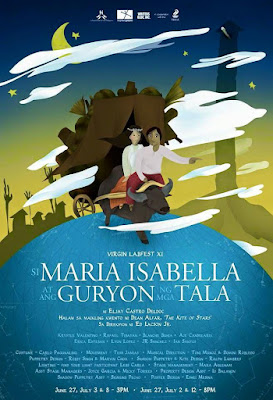 Maria Isabella is an idealistic 16-year old girl who fell in love with a young man named Lorenzo Salvatore, whose life she claimed she saved. However, Lorenzo keeps his eyes always closed, and only opened them when he was looking at the stars in the sky.

Maria Isabella asks the kite master Sr. Melchor Antebades to make her a kite which could bring her up among the stars, so Lorenzo would see her. Sr. Melchor gave her an incredible list of materials she needed to collect all from all over in order to make this kite. Maria Isabella asks her younger friend, a boy who was a butcher's apprentice, to accompany her on her trip. They never thought that their quest for these materials would take them 60 years!

Before the play began, it was announced that the original lead actress of this play (Krystle Valentino) was stricken with chicken pox. Maria Isabella is going to be a totally new actress in this play named Ness Roque-Lumbres, who apparently just learned the script the night before. It was distracting at first Ms. Roque-Lumbres had to read from the script she carried with her onstage, but eventually her infectious charisma as the spirited heroine completely won us over. Petite and pretty, Ms. Roque was simply a delight to watch. Rafael Tibayan was very winning as well with his own dorky charm as the butcher boy whose name we never even learn.

This script was written by Eljay Castro Deldoc based a book by Dean Francis Alfar entitled "A Kite of Stars" (I have to look for this book!). This was unlike any other play I had seen in the Virgin Labfest before, because of it was a whimsically romantic play for children. It was imaginative the way the fantastic tale was told with puppets and shadowplay. It sort of reminded me of the Tanghalang Pilipino production of "Ang Munting Prinsipe" which also used similar devices to tell its story. I can totally imagine TP or PETA picking this timeless one-act play up and developing it into a gorgeous full-length production which can run forever to entertain generations of kids for years to come.

The positive word of mouth has been proven true. I have watched 9 out of the 12 one-act plays of this year's VLF (I was not able to catch Set A). This play is definitely among the Top 3 in this year's Labfest. 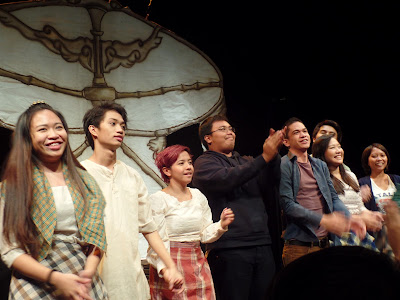 
There is one more schedule of Set D left on July 12, 8 pm, the last show on the last day of this year's Virgin Labfest.