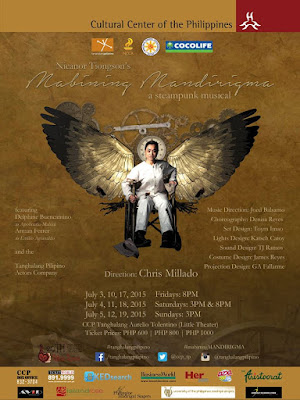 I love the title of this play -- "Mabining Mandirigma". Literally, it means "The Gentle Warrior" and this is the formal English translation of the title. But it also means "Mabini, the Warrior,' referring to Gat. Apolinario Mabini, the central character this play is all about. Aside from that smart title though, there is so much more to love about this play from the story, the music, the performances to the technical aspects I do not know where to begin.

Written by Dr. Nicanor G. Tiongson in rich Filipino, the story followed of the political career of Apolinario Mabini during the Philippine Revolution after the declaration of independence in Kawit, Cavite on June 12, 1898. Respected for his legal and nationalistic wisdom, Mabini is a trusted confidante, adviser and Cabinet member of President Emilio Aguinaldo. 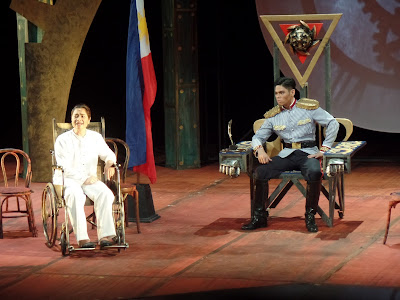 Buencamino and Ferrer as Mabini and Aguinaldo

When the revolutionary government was forced to move the capital to Malolos, a Congress was formed under the leadership of turncoat illustrados like Pedro Paterno and Felipe Buencamino, who were only too willing to kowtow to the Americans. Outvoted, Mabini was exiled to Guam. Shortly after his return home and resignedly signing allegiance to the US, Mabini succumbed to cholera in May 1903. 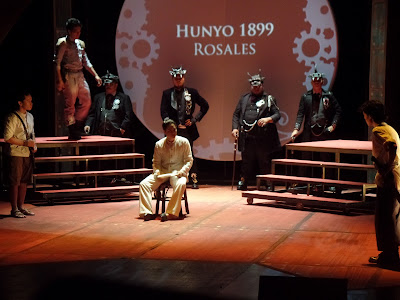 Mabini and the Illustrado villains

The Mabini story is still rather familiar to me, especially since I recently watched another musical about Mabini entitled "Ang Huling Lagda ni Apolinario Mabini" staged by Dulaang UP just last October 2014. The former play (written by Floy Quintos, starring Roeder Camanag) used Mabini's exile in Guam as take off point, an event which only had brief mention here. While that one had a more reverent traditional telling of Mabini's story, I felt we got more details of the political intrigues experienced by Mabini in this production.

I realized that watching this play on the Fourth of July was so ironic. We see American icons like Mark Twain, Uncle Sam and the Statue of Liberty on the stage. We hear Mabini converse with American authorities like William Howard Taft, Gen. Franklin Bell and Gen. Arthur McArthur, with their Western-twanged English. While staged with humor, these imaginatively out-of-the-box scenes so bluntly explained Mabini's anti-American sentiments. 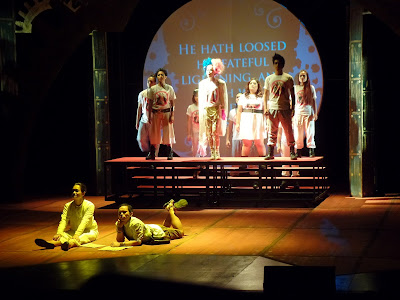 The first thing you notice when you enter the Little Theater of the CCP is the awesome design of the stage. This classic-looking yet very contemporary set was designed by acclaimed multimedia visual artist Toym Imao. Marked by huge gears of an industrial machine, they made the whole stage feel like the inside of a clock for me. The set pieces were oddly charming, like the backrest of Aguinaldo's chair that looked like the front of a jeepney.  The edgy costume designs of James Reyes and the video projections of GA Fallarme worked very well with this set. The lighting design of Katsch Catoy made the gears of time and drama come alive. 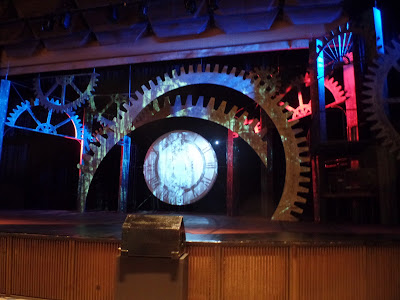 The musical themes for this play by the award-winning musical director Joed Balsamo was generally audacious and bold. The core rock opera-style score was admixed with various other musical styles. There were some variations of American songs to accompany anti-Imperialist sentiments. There was also a sweet gentle lullaby in the mix, reminiscent of Balsamo's work in "Sandosenang Sapatos," another TP production. One of the magical production numbers was a song sung in total darkness, with the stage only lit by flashlights held and danced around by the cast, which I guess was inspired by "Pitch Perfect 2". 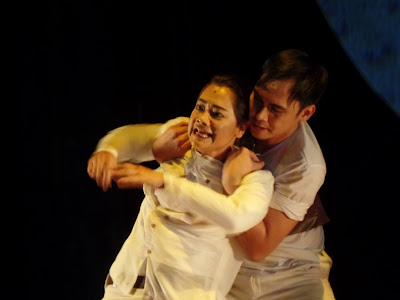 Delphine Buencamino and Marco Viana in an intense scene

Remarkably, the lead role of Apolinario Mabini is being played by a woman, Ms. Delphine Buencamino. According to the production notes, this gender-bending casting was borne out of musical necessity, to set Mabini's voice apart from the dominantly male voices in the cast. Yet, secondarily, this casting choice also emphasized Mabini being the ostracized odd-man out. I had seen Buencamino act last year in UP and in Virgin Labfest X. Her role and performance here in "Mabini" should by far be her most challenging and her most memorable. She totally captured Mabini's intellectual brilliance, principled conviction and later, his bitter disillusionment. Beyond the initial adjustment about her feminine and youthful festures, Delphine Buencamino became Mabini. (Coincidentally, Ms. Delphine's celebrated mother Shamaine Centenera-Buencamino also did a gender-bending role in Dulaang UP's "Ang Misis Kong Promdi" last year, but only in a supporting role. Daughter trumps mom in this regard.) 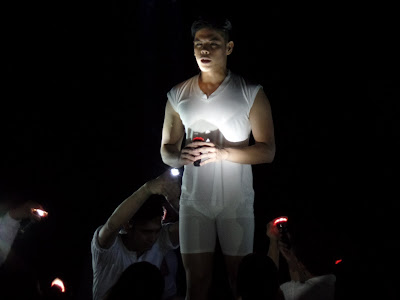 Arman Ferrer in the Flashlight number

Arman Ferrer continues to impress his audience with his vocal agility. His Aguinaldo was commanding both in physical bearing and in vocal timber, standing out from the rest of the cast. Carol Bello gave an emotionally-rich performance as Dionisia, Mabini's mother. The Tanghalang Pilipino Actors Company members, Jonathan Tadioan (as Buencamino), JV Ibesate (as Paterno), Aldo Vencilao (as Mabini's loyal caretaker and ward Pepe) and Marco Viana (as young and still able Pule Mabini) also give outstanding acting and singing performances. 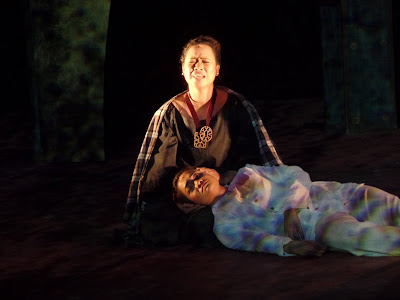 Carol Bello sings a lullaby for her son

The direction of Chris Millado is very vibrant. The history tale never becomes stale, with anachronistic details which were either delightful (like cellphone selfies) or jarring (like punk hair and fashion). He calls this style of making the stories of the past become relevant to the viewers of today "Steampunk." This "steampunk" spirit is heard in the music and seen in the sets, costumes, makeup and choreography (by Denisa Reyes). The repurposing of the Mabini story to apply to modern societal and political issues was also spelled out for us at the end, the scathing message reminiscent of TP's own "Kleptomaniacs" from last year. 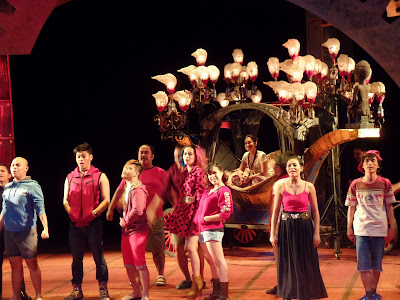 This technically elegant production is obviously the fruit of a lot of hard work. More people should know and watch this beautiful and very polished show. Not only is it very entertaining, it is also very enlightening, with a noble purpose and message. This is a visual and aural spectacle that should not be missed. Kudos to the cast and crew of Tanghalang Pilipino for another first class original Filipino theater production!