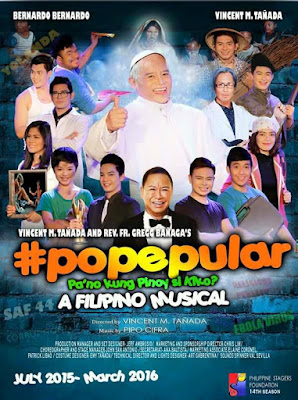 Before watching this show, I only knew that this latest PhilStagers' musical would be about Pope Francis. I had no idea whatsoever how theater wunderkind Atty. Vincent Tanada could possibly do a full-length musical about the new Pope. In his previous musicals I had seen about heroes like Jose Rizal and Andres Bonifacio, I had my expectations as to how the story would go. But "#Popeular" will really be all original, written from scratch. Knowing how skillful a storyteller Atty. Tanada is, I was really excited to see how it would go.

The play opened with the Papal visit to Manila in January 2015. As the Pope when through the city streets on his Popemobile, there were five Filipino individuals gathered there in the crowd, all fervent admirers of this beloved new Pope. The complex libretto of this musical would then find parallelisms between the Pope's own life and the lives of these five people. The research required to come up with such a detailed script was obviously a gargantuan undertaking. Having been co-written by a Catholic priest, Rev. Fr. Gregg Banaga, we are assured that the text of the script is true to the Catholic values it espouses. 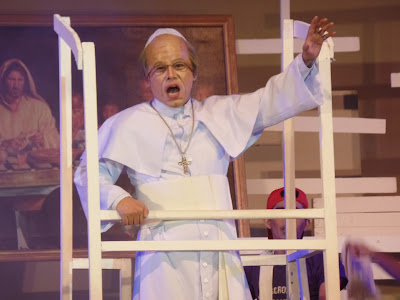 Vincent Tanada (as the Pope on his "Popemobile")

So in effect, we will be learning not only about the life and times of Jorge Mario Bergoglio, but also, we will be learning about the lives of five real-life modern Filipino heroes. All these six life stories were told in a most interesting and engaging way. The five Filipinos we will meet during the course of the show are: Dr. Ed Gomez (marine biologist and environmental activist), SPO1 Mark Lory Clemencio (one of the ill-fated SAF 44), Ronald Gadayan (a very honest NAIA janitor), Joey Velasco (a noted Christian-themed painter) and Kristel Mae Padasas (an active church relief volunteer). As diverse as the life stories of these six personalities were, "#Popepular" manages to intertwine them into one cohesive whole. 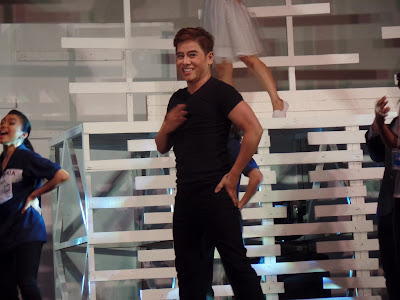 Like all the other PhilStagers productions, Vincent M. Tanada was the writer and director, as well as lead actor and singer. He uses a Latino accent to portray the Argentinian Pope. This may not always be easy to understand at first, especially when he was speaking in Filipino, but we do get used to it eventually. His portrayal of the pontiff was delightful and fatherly as required, in his pontifical garb and balding head. This calm and regally benign role called for a more restrained acting style than we usually see him do.

But lest his fans worry, Tanada also gets to play the young Jorge Bergoglio who was a club bouncer and tango dancer in his youth, so they will still be seeing him as this dapper and dashing persona in several scenes. His high baritone voice is as powerful as ever, capably conquering the high notes musical director Pipo Cifra made him sing. 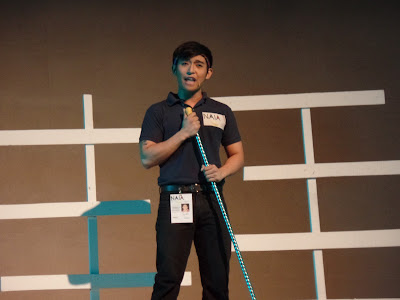 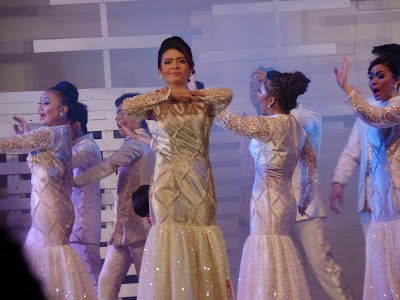 As usual, Patrick Libao and Cindy Liper shine brightly in their roles as Ronald Gadayan and Kristel Padasas,respectively. Libao possesses a singing voice of a bright tenor quality and a strong stage presence. Liper's skills as a dramatic actress can really rivet people's attention on her when she is onstage. Chin Ortega played Dr. Gomez. His singing voice and acting chops are similarly impressive. Veteran actor Bernardo Bernardo also plays this role in other shows, so that should also be something to watch out for. 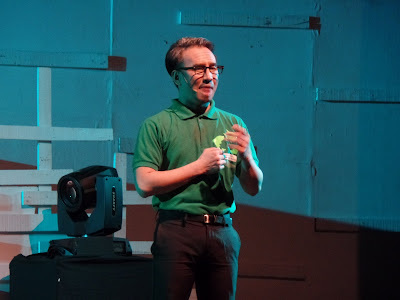 JV Cruz played "Heartist" Joey Velasco with infectious cheerfulness at the start, which made the latter part of his story with his wife (played by Adelle Ibarrientos) and the street kids he nurtured (played by Gabby Bautista and Clara Mariano) much more poignant. Kenneth Sadsad plays SPO1 Clemencio with due military dignity and confidence. His relationship with his wife and young son Karl (played by Peter Parker Tanada) was both very moving. The singing voices of these newer lead actors may not yet be as polished as the veterans, but with repeated performances, I am sure they will be honed to more perfection. 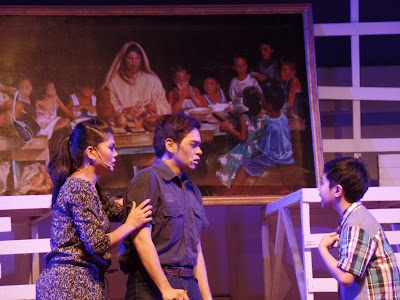 JV Cruz and Adelle Ibarrientos (as Mr. and Mrs. Velasco)
with Gabby Bautista (as Emong) 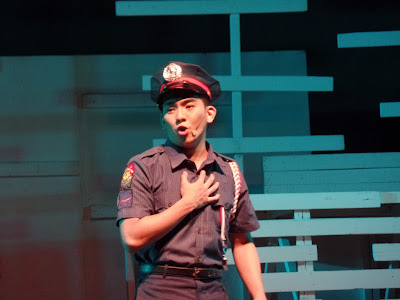 The progression of the play is easy to follow despite the multiple individual storylines we are following. The first half of the play was very engaging as we are introduced to each of the characters. The songs "Ang Papa ay Ako, Ako ay Siya" and  "Diyos Ko'y Diyos Ninyo" was especially very moving for this part of the show. In the middle there was a romance segment, where the love stories of Gadayan, Velasco and Clemencio were told, set to the song "Love is Love" as the couples danced the tango. I thought this was a very innovative and most entertaining part of the show. 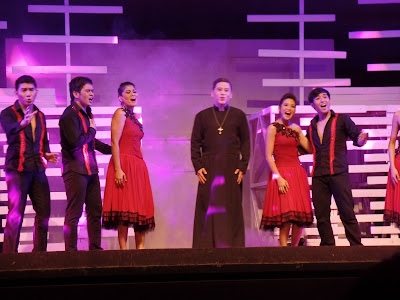 The second act details each of the characters as they go through some personal travails. While they may also be of some importance, I felt these scenes took a rather long time to play out. This length of time devoted to relatively minor events like Gadayan lending money to his sister or Clemencio training in the police academy sort of derailed the momentum at the midpoint a bit. Anyhow, it gets back on track when the individual sacrifices of these modern heroes were actually played out. Most remarkable of these tragedies staged were the stormy mass in the Tacloban Airport and the bloody Mamasapano incident. 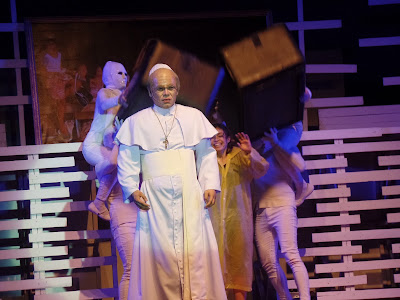 The Mass in Tacloban

Since "#Popepular" is a 2-1/2 hour show without an intermission, this momentum is very important to maintain, or else the audience may start getting impatient, especially the youth. But then, grabbing one's attention is really one of the hallmarks of a PhilStagers' production. There would always be a catchy song, a cool dance step, a humorous line or an interesting gimmick to get our attention back should it wander off occasionally.

The message of this play about conversion and transformation may be very serious and ambitious, but Atty. Tanada really knows how to tell it to the youthful audience he targets -- educational, entertaining and enriching. Watching this play is certainly an uplifting experience you should not miss. 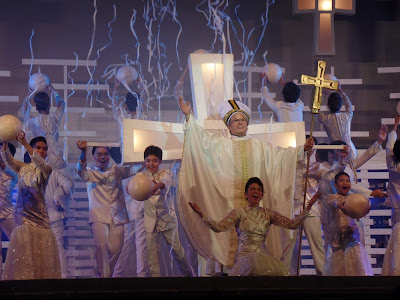 Tickets cost P250 for students, and P300 for regular patrons. Call Ms. Cherry Bong Edralin via 0917-750-0107 or 218-3791 for more details. This show will be touring in various Metro Manila and provincial venues. I will be posting the show venues as they are released.