Recap of Our WORLD VOICE DAY Concert 2016 with VIVA VOCE

April 16 is World Voice Day (WVD). Every year, the Dept. of ENT-HNS along with the Voice and Swallowing Center in my institution join colleagues the world over to celebrate this advocacy. WVD reminds us about the importance of our voices in our daily lives. We should strive to acquire and maintain good voice habits in order to preserve this vital vehicle of self-expression, communication and occupation. Like before we had a free throat endoscopy mission and a lay forum about voice care. 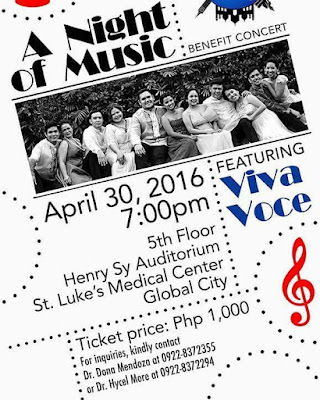 As with previous years, a WVD celebration is not complete without a musical presentation. This year, we have invited a classical singing ensemble called VIVA VOCE to be our main guest. We had already invited Viva Voce before in previous WVD celebrations for mini-concerts at the lobby of St. Luke's Medical Center in Quezon City during the lunch hour. This year however, the concert will be held at the Henry Sy Sr. Auditorium of St. Luke's Medical Center in Bonifacio Global City at evening primetime.

Viva Voce had its beginnings as a summer voice camp in 2010 whose faculty was headed by Camille Lopez-Molina, who remains to be the group's musical director up to now. The members are young classical singers from schools of music from various colleges and universities around the metro, including UP, UST, PWU and St. Scholastica. Aside from concerts and recitals, Viva Voce also participates in various theater productions by Dulaang UP and PETA to name a few. 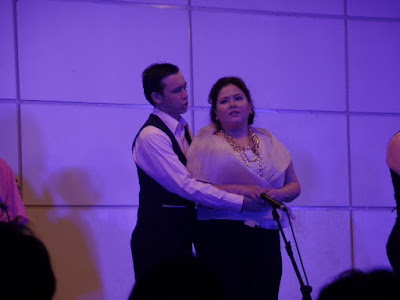 With Ms. Molina at the piano, the concert proper began seriously with four Italian operatic arias by Donizetti, Mozart and Puccini, done as an ensemble or solos by selected members. Roxy Aldiosa, a soprano, sang "Alto's Lament" by Marvin Hamlisch. There was also a duet by Anna Migallos and Carlo Angelo Falcis entitled "Love Unspoken" from "The Merry Widow" by Franz Lehar, which ended with a real kiss on the lips! They ended the first half with a group version of "Climb Every Mountain" (from "The Sound of Music")


Dr. Tomas Mendez and his showstopper in the middle of the First Half

Some doctors were also invited to share their singing talent in this concert. Junior ENT resident Dr. Tomas Mendez regaled the audience with a strong rendition of Puccini's showstopping aria for tenors "Nessun Dorma" (from "Turandot"). Cardiology consultant Dr. Rodney Jimenez was as smooth as ever with his rendition of "What I Did for Love" (from "The Chorus Line"). Neurology resident and "I Love OPM" shoo-in winner Dr. Fran Efendy channeled Josh Groban with "To Where You Are". (VIDEO) 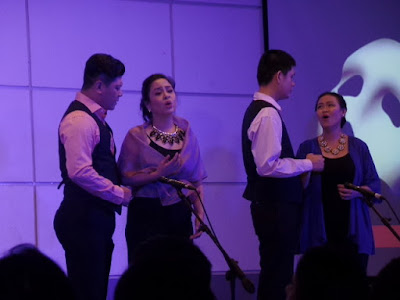 After the 20-minute intermission, Viva Voce changed from their formal wear in the first half into more casual wear for the second half. The first few songs of the second half were Filipino songs. The set started with "Maalaala Mo Kaya" by Constancio de Guzman sung by the ensemble. There was a duet by Glenda Liao and Raymond Yadao of "Makikiliti Kang Totoo" (from "Walang Sugat" by Severino Reyes), as well as a medley of Tagalog folk songs entitled "Halina't Magsaya."

There were also two songs which featured the silken soprano voice of Ms. Myramae Meneses. I believe she is the most well-known soprano from Viva Voce, having already played the lead role of Maria Clara in both the Dulaang UP and the Resorts World staging of "Noli Me Tangere the Opera", as well as in "Kanser @35" by Gantimpala Theater. Her first solo was traditional folk song "Leron Leron Sinta", followed by Manuel Velez's "Sa Kabukiran" (as a duet with Iona Ventocilla). 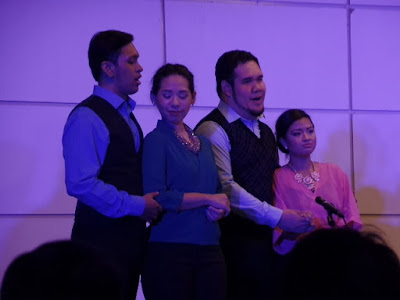 The group then divided according to gender to render the next two songs. First, the boys got together to sing "Drinking Song" (from "The Student Prince" by Sigmund Romberg. Then the girls took their turn to sing "Comes the Broken Flower" (from "Trial by Jury" by Arthur Sullivan). They all joined up again to sing a medley of the most familiar songs from "The Phantom of the Opera" by Andrew Lloyd Webber.

The final three songs of the main set were from the very popular Claude Michel Schonberg musical "Les Miserables." Baritone Yadao first sang his version of "Stars", then tenor Falcis sang "Empty Chairs at Empty Tables," both of which just so happened to be my favorite songs from the show (-- you bet I was singing along, haha!). The grand finale of course is "One More Day" (VIDEO), after which everyone took their bows. Upon cries for more from the audience, Viva Voce obliged and sang a Filipino pop classic "Nais Ko" (VIDEO) as their encore before taking their final bows for real. 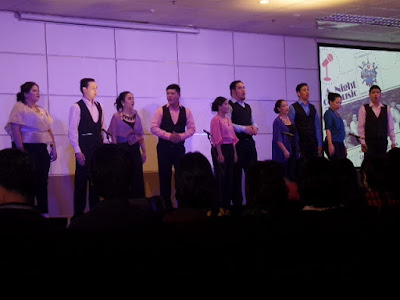 The Ensemble sing their Encore Song