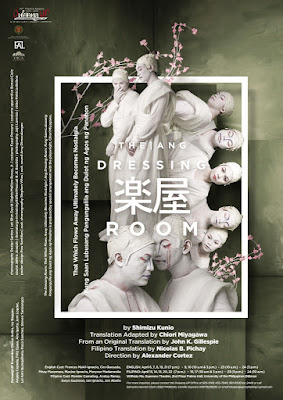 To close their current season, Dulaang UP chose to stage a play about the theater, a 1997 Japanese play called "The Dressing Room" by Shimizu Kunio. As DUP usually does, they would be staging in parallel both an English and a Filipino version of this play. The English version was written by Chiori Miyagawa, as adapted from the original English translation by John Gillespie. The Filipino translation is by multiple Palanca award-winning playwright Nicolas Pichay.

Aside from the language, Dulaang UP also pushes the envelope further by innovating on the casting as well. The original play involved four actresses playing the four actress characters. The English version will stay faithful to this casting. In the Filipino version however, the four actress characters will all be played by MALE actors. On the day I watched, I caught the Filipino version with the gentlemen. Now that I have seen it, I fervently hope I also get a chance to watch the English version with the ladies.

"The Dressing Room" is literally where the action of this play is set. Initially, we see Actress A and Actress B dressed in Japanese-style robes, sitting in the middle of the stage in front of their respective box tables, applying white makeup on their faces. Suddenly, Actress C will enter dressed in Victorian finery, rehearsing her lines. Much later, an Actress D will come into the room to tell Actress C that she wants her role back. The whole play will be about the actresses musings about Shakespeare and especially Chekhov as they reflect on the passions and frustrations they have about their acting careers.

Theater actors and theater fans will definitely fall in love with the intense love for theater espoused by this play. When sentimental Actress A and acerbic Actress B have an acting showdown playing Lady Macbeth, the effect was electric. This was even though some essence had been lost with the translation as the difference between two Japanese adaptations should have been highlighted (but obviously could not be conveyed in Filipino). Familiarity with the history of Japanese theater will enhance appreciation since the original Japanese play assumed the Japanese audience it targeted already knew.

I woe the fact that I am not very familiar with the Anton Chekhov plays referenced extensively in this play, namely "The Seagull" ("Ang Tagak" in Filipino) and "The Three Sisters". Those who know these Chekhov plays will definitely have a deeper emotional connection with these four actresses who adore "The Seagull" with unparalleled devotion. It was a bit confusing for me to delineate between which lines were from which play. I can imagine how this integration of another play within the main play could be so powerful for those who know these lines beforehand.

Roeder Camanag was a clear standout with his subtle yet intense portrayal of Actress A. He did not have to resort to hysterics and big gestures to get his character actress. Actress A is the oldest of the four actresses so Camanag's demure and dignified performance was on point. Of the four, he was the one who came across as most genuinely Japanese.

Andoy Ranay as the flamboyant Actress B had all the funniest lines and Ranay runs to town with them. His over-the-top delivery of the hilarious lines hit the mark. He struck the audience's collective funny bone successfully in many scenes. His attack on the role is definitely more contemporary and more Filipino.

Actress C I think was the most difficult role to play for a male actor, because with her wig and gown she was so obviously female. The actor who plays Actress C needed to really needed to show that she was a strong person yet insecure actress. Compared to the others, actor Gwyn Guanzon had a tall and hefty build, so it was obvious he was only cross-dressing as a woman. It took time for me to get the drift of his character and his acting style.

The entrance of Actress D was such a puzzle to me since I could not understand what she was talking about at first. Here, knowledge of Nina's lines in "The Seagull" would be a marked advantage. Young actor Jon Abella played her quite awkwardly at first. Fortunately when his character undergoes a transition in the story, Abella hits his stride and became more at ease in his performance. His second entrance was so beautifully eerie.

Ohm David should be commended for his beautiful three-dimensional set design. This "dressing room" could have been just a plain drab musty room in the hands of a less artistic designer. David's dressing room is breathtaking to behold. The rest of the artistic team who deserve mention would be Meliton Roxas Jr. (for the lighting design) and Faust Peneyra (for costume design, especially the Japanese ones.)

Director Alexander Cortez generally had excellent control over his material. If there was anything that I felt was off, it was the decision to add dancers with odd choreography (care of Dexter Santos) which I thought was distracting and added nothing significant to the story-telling. Other than that, this play was briskly told in a little over an hour (with no intermission break). The whole show had an ethereal quality, haunting, nostalgic, especially enriching for those who love the theater.

The play’s English version is called “The Dressing Room: That Which Flows Away Ultimately Becomes Nostalgia". The all-female cast includes Frances Makil-Ignacio (as Actress A), Ces Quesada (as Actress B), Missy Maramara (as Actress C), with Maxine Ignacio and Marynor Madamesila (alternating as Actress D). This is such as strong cast. I hope I get the opportunity to see this too during their remaining shows this week: April 19/Tuesday/7pm, April 21/Thursday/7pm, April 23/Saturday/3pm and April 24/Sunday/10am. 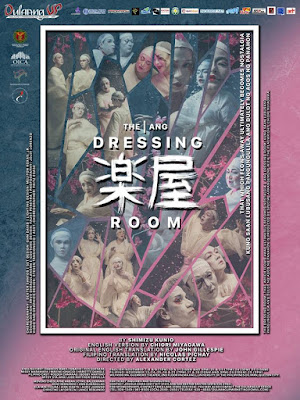 I never got to watch the English-language, all-female version of Dulaang UP's "The Dressing Room" when it was first staged 2-1/2 years ago. Fortunately, they have decided to restage this show as part of their current season, so finally, I was able to watch it. Being the original way the play had been intended to cast (with women), the interactions were less awkward, and serious underlying emotions felt more natural.

Director Alexander Cortez brought back the same artistic team as before, composed of Dexter M. Santos (choreography), Ohm David (set design), Meliton Roxas Jr. (lighting design), and Faust Peneyra (costume design). The cast is basically the same as before, with only Actress D portrayed by a new actress. 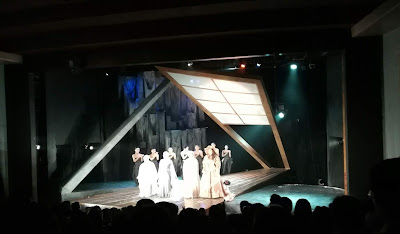 The beautiful set of Ohm David, enhanced by the lights of Meliton Roxas, Jr.

Actress A and B were portrayed by the unbeatable tag team of Frances Makil-Ignacio and Ces Quesada. Actress A with the scar on her face, was older and sterner in her ways. Actress B is on the plump side, of a kinder and more cheerful disposition. Since this is their second run in the same roles, the humorous chemistry between Makil-Ignacio and Quesada was easy and very natural. The two veteran actresses shone in those lines which expressed their frustrations with their career, how they never were able to perform their dream roles, and had to content themselves on being prompters on the sidelines.

Actress C was played by Missy Maramara. This was a key role because it was her primadonna attitude and indulgent musings that triggered the other Actresses to react accordingly. Maramara, with her skill for the dramatic monologue, truly made this character more three-dimensional. Actress D was played by the young upcoming actress Harriet Damole. Mousy and timid, the role of Actress D demanded more acting skill from the performer in order to elevate the role to match the more vivid personalities of the other three characters, and I believe Damole rose to that challenge. 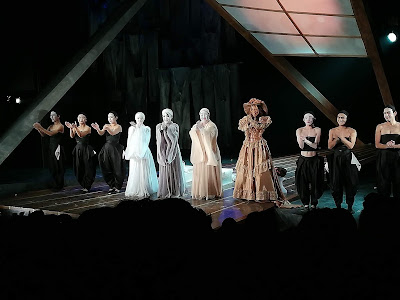 Damole, Makil-Ignacio, Quesada and Maramara
and the dance ensemble at their curtain call

To catch the unique twist of a Filipino version (translated by Nicolas Pichay) with an all-male cast, these are the dates: November 13, 14, 15, 16 (7PM), November 17, 18 (10AM AND 3PM), November 22 (7PM), November 24 (10AM) and November 25 (3PM). Only Roeder Camanag remains as Actress A. Bobby Martino, Mitoy Sta. Ana, and Jude Servilla play Actresses B, C and D respectively. Should be interesting to see how Mitoy Sta. Ana would play the diva Actress C.