Last night, Gawad Buhay, the Philstage industry awards exclusively for the performing arts, gave its awards for the 8th year. This was the third year in a row that I watched it. For the last two years, the awards night was held in the CCP Little Theater. This year, the ceremonies were held in Onstage at Greenbelt 1, with the show directed by Jenny Jamora.

For 2015, it was my distinct honor to have been invited to serve on the Gawad Buhay jury, an independent panel of critics, scholars, artists and theater enthusiasts who determines the winners for the awards. I was not only watching the show this year, but for the past year, I actually participated in the nomination and voting process for the quarterly citations and of course, these awards. Since the final vote was by secret balloting, I had no idea who will win. So some winners also came as a big surprise to me. 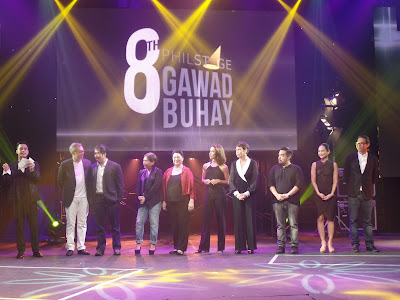 Like last year, the ever-funny Topper Fabregas was the emcee of the proceedings. But this time he had Kakai Bautista (in an eye-catching body-hugging white outfit with a deep plunging neckline) to banter with as co-host. They gave out the first four awards, all of which were automatic winners for being the only nominees in their category. 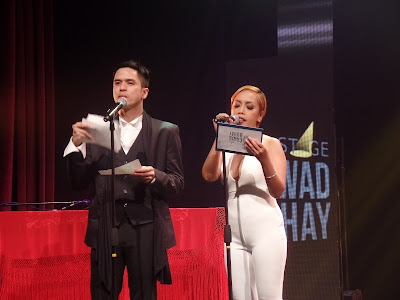 Emcees for the Night: Topper and Kakai 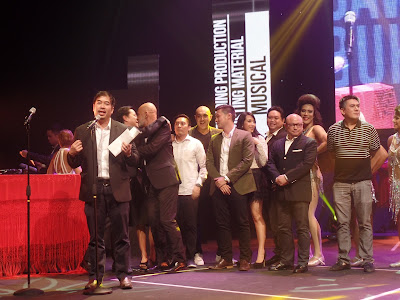 The cast and crew of La Cage Aux Folles receive their award.

The next presenters were Roselyn Perez and Fred Lo. 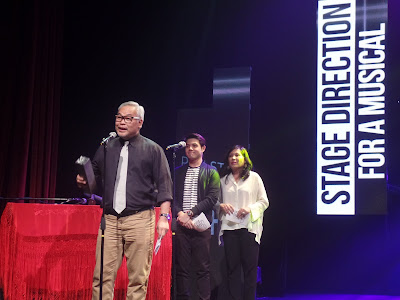 Chris Millado, receiving one of 11 awards for "Mabining Mandirigma"
with Fred Lo and Roselyn Perez behind him

This was followed by "How Do I Prepare?" This was the first of a series short documentary videos (directed by Joaquin Valdez) showing the theater or dance production as a evolving process by collaborating artisans.

The next presenters were Nar Cabico and Phi Palmos (who was in a blonde wig, trying to channel Meryl Streep, I think) to present award for acting in a musical.

8. Female Featured Performance in a Musical
• Cris Villonco, “Bituing Walang Ningning, The Musical” (Full House) (MY REVIEW)
Her Lavinia was the life of the whole show.

9. Male Featured Performance in a Musical
• Antonio Ferrer, “Mabining Mandirigma” (TP)
His portrayal of Emilio Aguinaldo was too powerful to forget. 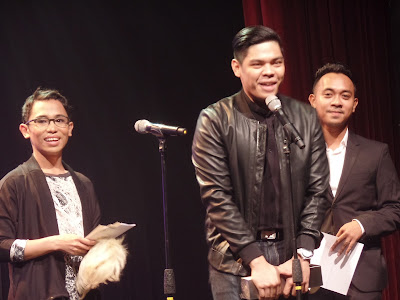 11. Male Lead Performance in a Musical
• Audie Gemora, “La Cage aux Folles” (9WT)
"Two years ago, Melvin Lee won this award for "Care Divas." Last year, it was Red Concepcion for "Priscilla". Now this. If you want to win this award, you have to wear a dress!" 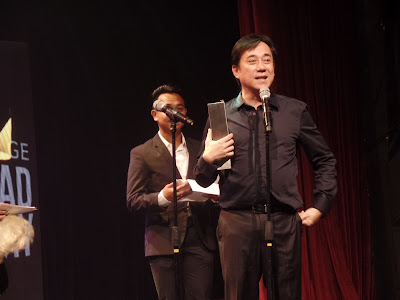 After another short video was shown about "Designers in their Element", John Herrera, Giannina Ocampo and Caisa Borromeo strutted out like fashion models to give out the design awards. 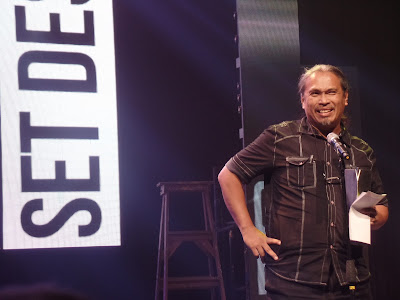 Toym Imao won for his "steampunk" designs for "Mabining Mandirigma

The NATATANGING GAWAD AWARDS were chosen by the Philstage Board Members, not the GB jury. These lifetime achievement accolades recounting the lives of veterans who led lives filled with passion for the performing arts were very inspirational parts of the show.


Tonight the first honoree is Ms. Celia Diaz Laurel. The introduction by Ms. Joy Virata told us about Ms. Laurel's prolific career on stage, starring in probably a hundred plays as lead actress throughout her career, from UP to Repertory Philippines. She was also a master of designing costumes within a limited budget using her "glue-gun and stapler". When Ms. Laurel went up the stage, her children Cocoy, Nicole and Iwi accompanied her as she sang "The Colors of My Life" before her heartfelt speech.

An unprecedented special number featuring three pairs of dancers from each of the three biggest dance companies of the country -- Ballet Philippines, Ballet Manila and the Philippine Ballet Theater -- regaled us with the power and grace of contemporary ballet. This led to the the presentation of the awards in the Dance categories. 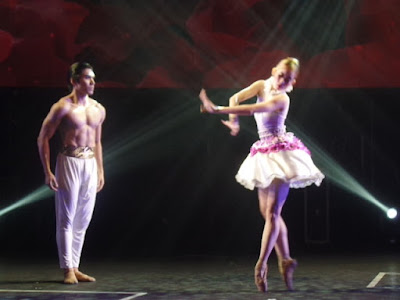 One of the Ballet Pairs in an elegant excerpt

A reunion of the "Priscilla Queen of the Jungle" cast, namely Jon Santos, Red Concepcion, Michael Williams, presented next. Jon Santos was a hilarious scene-stealing riot as always. 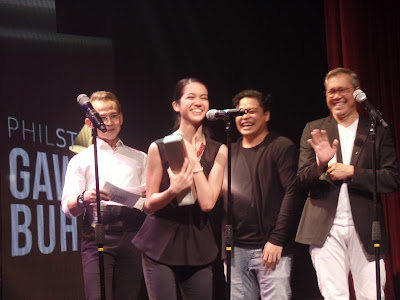 A shy and excited Monica Gana
with Jon Santos, Red Concepcion and Michael Williams behind her. 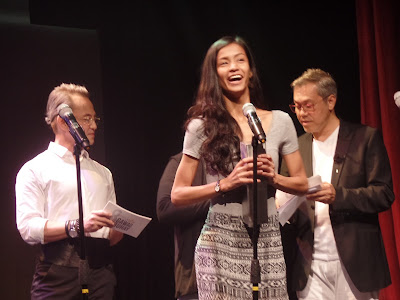 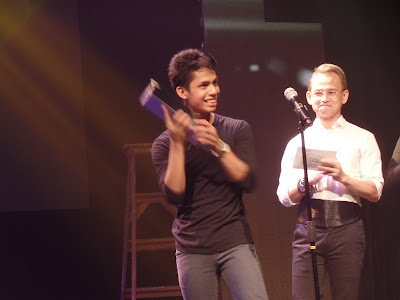 A genuinely surprised Victor Maguad did not expect to win this award.

The second Natatanging Gawad Award was for the recently-conferred National Artist for Dance -- Ms. Alice Reyes. She was introduced by Paul Morales of Ballet Philippines.  She was given a dance tribute entitled "Tagistis ng Ulan" accompanied in song by OJ Mariano. In her speech, Ms. Reyes reminded us, that in the midst of this fast-paced world we live in today, we should always make time for artistic excellence. 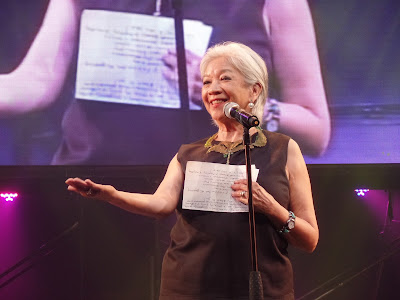 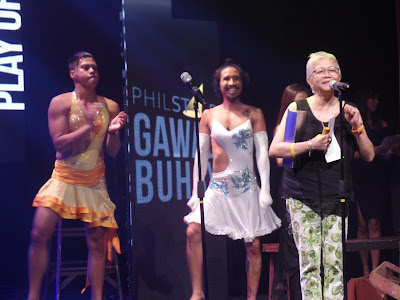 Denisa Reyes receives her award,
with the goofy pair of Jerald Napoles and Pepe Herrera behind her 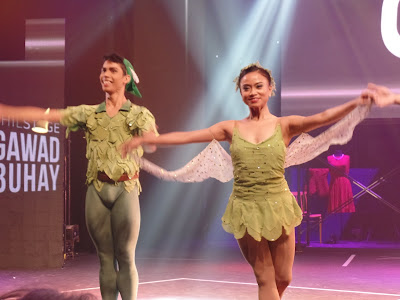 Pair from "Peter Pan" dance an excerpt from the show

The next short video reminded us how last year 2015 was "The Year of the Straight Play." Following that, Liesl Batucan and Jonathan Tadioan presented two awards. 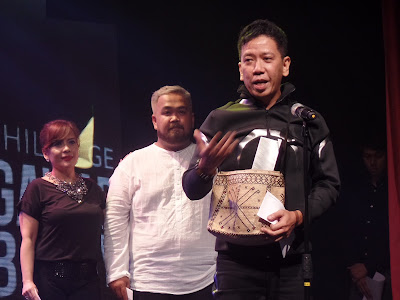 The next set of awards were presented by Loy Martinez and indie film actress Meryl Soriano (who kept on wondering aloud what she was doing in a theater awards show).

33. Female Featured Performance in a Play
• Roselyn Perez, “33 Variations” (RTT)
Very happy for her, even if I was rooting for her to win for "The Normal Heart" though.

**** FLASH REPORT! The next day, the Gawad corrected itself and announced that Ms. Perez actually won for her performance in "The Normal Heart"! I am very happy with this news because I considered her "Normal Heart" performance one of the absolute best for the whole year. 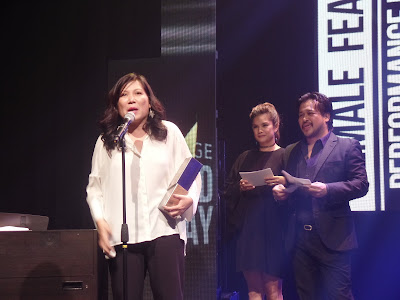 34. Male Featured Performance in a Play
• Teroy Guzman, “33 Variations” (RTT)
The reason why he was not there to receive his award was because he was in Europe doing a Shakespeare! What more can you say?!

35. Male Lead Performance in a Play
• Jef Flores, “This Is Our Youth” (RTT) (MY REVIEW)
If there was an award for Breakout Theater Star of 2015, it would go to Jef Flores, who made a very positive impression last year with his roles in "4000 Miles", "Kung Paano Ako Naging Leading Lady", "The Normal Heart" and this one. 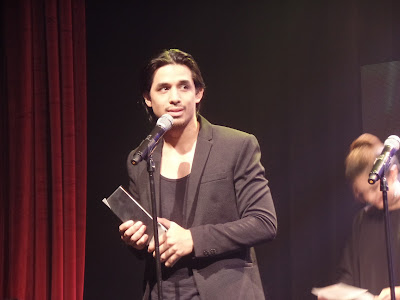 It was a stage reunion for "La Cage Aux Folles" couple Michael de Mesa and Audie Gemora as they presented the last set of awards.

37. Outstanding Ensemble Performance for a Play
• “The Normal Heart” (AAI/TNT) (MY REVIEW) 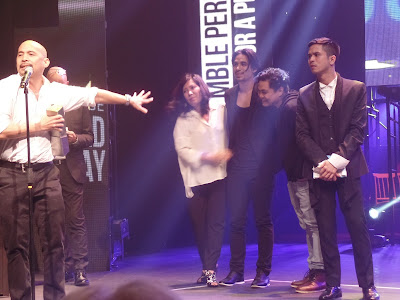 Bart Guingona and the award-winning ensemble of "The Normal Heart" behind him.
(Perez, Flores, Concepcion and Fabregas)

39. Outstanding Production of Existing Material for a Play
• “The Normal Heart” (AAI/TNT) 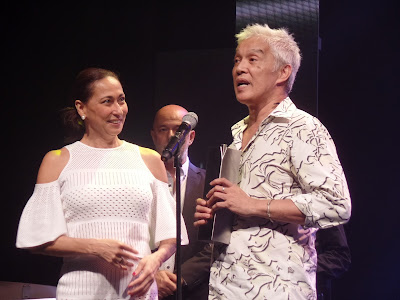