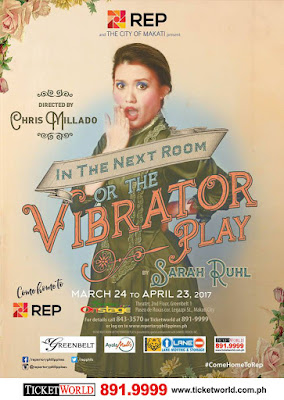 While the good doctor was treating a frigid Mrs. Sabrina Daldry (Caisa Borromeo) and a stressed-out Bohemian painter Leo Irving (Jef Flores) with his new electrical contraption, Givings' own gregarious wife Catherine (Giannina Ocampo) is experiencing depression and insecurity for having to hire another woman Elizabeth (Cara Barredo) to nurse her newborn daughter. As she meets and interacts with these patients, Catherine begins to get curious about what actually goes on in the next room and wants to try her husband's miracle treatment out herself.

I had already seen a movie before that tackled this very same controversial topic. It was entitled "Hysteria" (2011), starring Hugh Dancy and Maggie Gyllenhaal. Because of the sexual nature of the hysteria therapy shown here, the movie could be uncomfortable to watch. However, the interesting depiction of Victorian society mores and genteel execution of the screenplay rose above the potentially raunchy topic. That said though, I still could not believe that this movie was actually based on true events. But then again "Hysteria" was just still just a movie on a screen, "In the Next Room" is a live play -- a big difference! 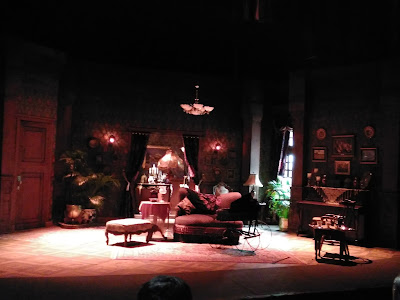 The beautiful set of Mio Infante

Director Chris Millado told this multi-layered story well. This is the second play by Sarah Ruhl that I have seen this year. Tanghalang Pilipino had just staged a Filipino version of Ruhl's 2003 play "Eurydice". I can see that feminism and female empowerment is an important running theme in both plays. She always told the story in the female point of view. "In the Next Room" was so vibrant in the first act because the shock factor while the shock factor was still fresh. The second act tended to meander and feel long as various issues of the minor characters were being addressed.

The set designed by Mio Infante was beautiful on its own, with all the Victorian-style furniture and home decor of that period. On the other side of the stage, we see the sterile doctor's clinic with an examination bed, a washing area and an elaborate electrical set-up that includes the titular vibrator. When the characters came out, we see gorgeous Victorian-era costumes by Bonsai Cielo. During the various undressing and dressing scenes, we see just how elaborate they really are. As the script also plays up the advent of electricity, the lights of Katsch Katoy were also essential to the story. 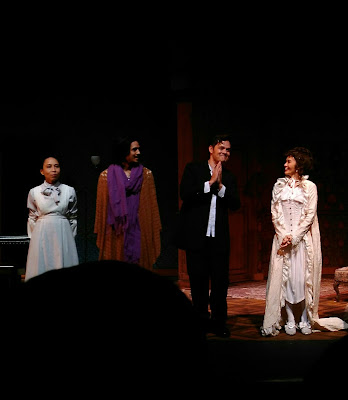 I commend the cast for their boldness and commitment to their respective roles. I never would have expected Rep ingenues like the energetic Giannina Ocampo, the endearing Caisa Borromeo and the elegant Cara Barredo all grown-up and being so daring to enact those "sensitive" scenes in front of a live audience. Tami Monsod's deadpan delivery was simply on point as Givings' efficient midwife Annie, whose expertise was giving "manual therapy."

Ever-flamboyant Jef Flores looked like he was having a lot of fun up there. Mustachioed Hans Eckstein gave just the right nuance of a stuck-up husband. Joshua Spafford's epiphany moment is the show's biggest and most meaningful surprise. The comedy somehow diffuses the discomfort of these situations, but this does not detract from the difficulty and challenge of these characters. 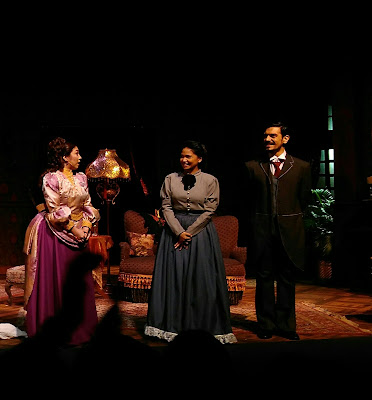 
While I was watching this play, it was interesting to note that the women seated around me, both old and young, were in stitches during the therapy scenes. They also gave an audible gasp during that liberating final scene in the snow. Ladies were clearly enjoying this show! The men though, including me, were generally silent. We were all probably trying to figure out in our heads the underlying messages this play wanted to tell us about the desires and frustrations of our dear wives.